North Miami Artist as Colorful as his Work

Bruno Camago was born in SÃ£o Paulo, Brazil and now lives in North Miami. He studied art in the 1960s in Brazil, when he says it wasn't easy due to the censorship imposed by a newly installed military government. Still, his love of art prevailed and he says that the "dark periods" have only made him grow stronger as an artist. When he relocated to the United States in 1966, life became lighter and, he says, "more colorful."

Here is our interview. 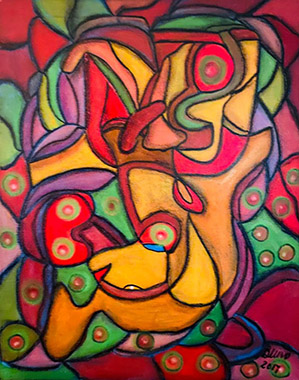 Miamiartzine: "What is the artistic medium with which you work?

maz: How did your career in art begin?

BC: I started painting at a very young age when I began drawing and experimenting with colors. Colors have always fascinated me. From that time on I began painting for my family and friends.

maz: Tell me more about studying art in the 1960s in Brazil. You said much was happening that influenced your work.

BC: Studying art in Brazil in the 60s wasnât easy due the censorship being imposed by our newly installed military government. The police began cracking down on students, setting up check points everywhere and arresting anyone with any communist or socialist ideals. That was the end of my university days and, from that time on, I decided to become my own teacher and began learning through many art books and art shows at Rio de Janeiro's Museum of Modern Art - MAM. However, the environment had become so toxic that in 1966 I decided to leave Brazil and move to New York City - the international art capital. And that's when I began experiencing the greatest impact in my art. 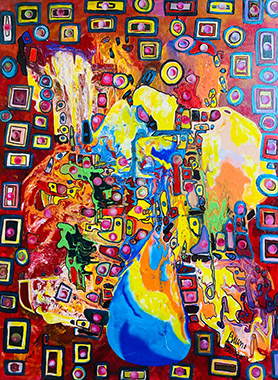 maz: You say that the need to express yourself due to a variety of power life experiences and deceptions. Can you elaborate?

BC: "Well, I have gone through many life experiences. First, there was the very dark period during Brazil's oppressive military government I mentioned above. However, after I relocated to the US in 1966, life became lighter again and more colorful. And this was a big relief for me, especially after coming back from such dark period. In 1969 I relocated to Jamaica where I fell in love with their people and colorfull surroundings. That reenergized my creative spirit and I began painting again. During the short time I lived in Jamaica, 1969-1970, I fell in love with the island life, became more aware of the beautiful colors of nature and that influenced my creativity greatly and my life permanently. At the end of the 70's I returned to New York where I met artist Grant Starr Barker Junior and was introduced to his wonderful work. His paintings inspired me tremendously due to his magical abiliy to express the beautiful movement of fusion of colors, lines and abstractions. One month later I moved to Saint Thomas, US Virgin Islands, to continue painting and take part in various artists competitions and art shows throughout the Caribbean. I had fallen in love with the island life. I ended up living in St. Thomas untill 1992. 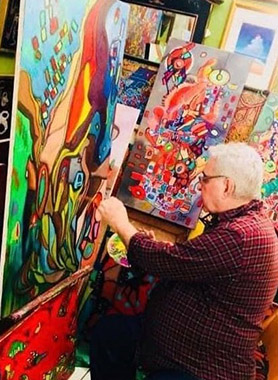 Bruno Camargo in his studio

maz: How did you end up in Miami?

BC: 1992 was a very difficult period in my life. Hurricane Hugo hit St. Thomas very hard and my beautiful hill home was completely destroyed. And this is why I moved to South Beach.

BC: My work demonstrates the emotional world that I have always envisioned: incredibly colorful and intense. And most of it was heavily influenced by a variety of styles, such as surrealism, abstract and a many other art forms.

maz: How does Miami influence your work?

BC: Through its diversity of people, incredible beaches and unique nature. We are so blessed with an amazing fusion of colors that only South Florida is able to offer. 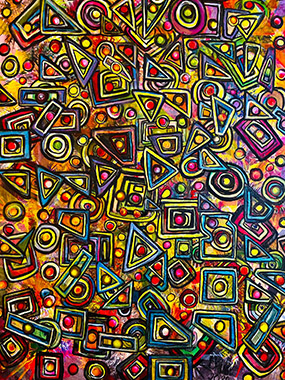 maz: Who are your influences?

BC: The artists that played the greateest influence in my work and life as an artist were Fernand LÃ©ger, Hans Hoffmann, Ernst Wilhelm Nay and Grant Starr Barker Junior.

maz: What was your "aha" moment where you knew that you had "arrived" as an artist?

BC: "One of my ""aha"" moments took place in 1990 when I received a Bronze Medal at the Caribbean Colours Art Show & Competition in Saint Thomas.

My other "aha" moment happened in 1993 at Biltmore Hotel in Coral Gables during a fundraiser event for Sheldon Lurie Art Against HIV Auction. Five guests were on an intense "betting battle" to purchase one of my paintings ($$$$). That definitelly made me feel very good and proud. This was definitely one of the greatest "AHA" moments of my life. "

maz: What would you like to achieve as an artist?

BC: To see my art being appreciated by my peers. 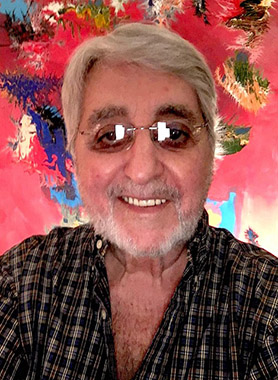 Bruno talks about the influence of Ernest Wilhelm Nay, born in Berlin in 1902 whose death was in Cologne in 1968.

He says this quote resonates with him: "Naturally people spoke in public of no sense, flowers or balloons. Yet I had a primitive form in my hands, which was certainly suitable not only to serve as an allegory of life for the high spiritual requirements of a new arithmetical pictorial form, but also give expression to elementary powers of nature of the people today."

maz:Â Where can someone see your work?