âThereâs no fool like an old fool, particularly when it comes to love and money.â

That about sums it up for Donizettiâs enduring and durable Don Pasquale. Italian comic opera doesnât get much better than this.

Speaking of durable, Don Pasquale was one of Donizettiâs 66 operas and was steeped in the bel canto (beautiful singing) operatic tradition. Don Pasquale may be the last popular opera festooned in that style. It is considered Donizettiâs comic masterpiece. 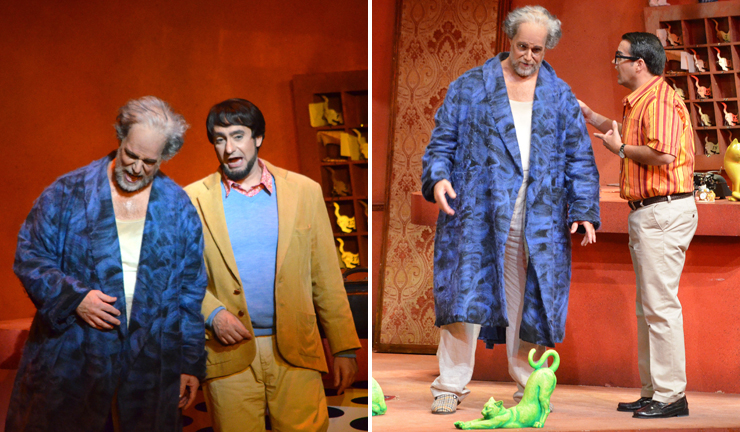 The maturing of the operatic art form was percolating in Italy in the 18th century. Opera seria was the dramatic form for royalty and nobility, often featuring gods and heroes, while opera buffa was comedy, made for and portraying common people in common situations. The characters often took on the persona of stock players from the commedia dell'arte; the buffoonish Pantalone becoming Don Pasquale, the overemotional Pierrot as Ernesto, the conniving Scapino being Malatesta and the cunning Columbina as Norina.

The rich old bachelor Don Pasquale wants his underemployed nephew Ernesto, his apparent heir, to marry a girl of his choosing. Ernesto is in love with a poor young widow (Norina) and refuses to accept his uncleâs bride choice, much to the Don's displeasure. Pasquale decides to disinherit his nephew and marry in his old age to sire a new heir.

During the overture, a series of black and white stills were projected onto a large screen, supplying the audience with the backstory: Don Pasquale surrounded by cats and being tested for cat allergies; Ernesto kissing his beloved Norina; the rich but geeky bride the Don has chosen for Ernesto and the nephew's unenthusiastic reaction; Ernesto and Dr. Malatesta plotting against his uncleâs plan; Don Pasquale reading a Cat Woman comic book while thinking, âWhat a beauty!â 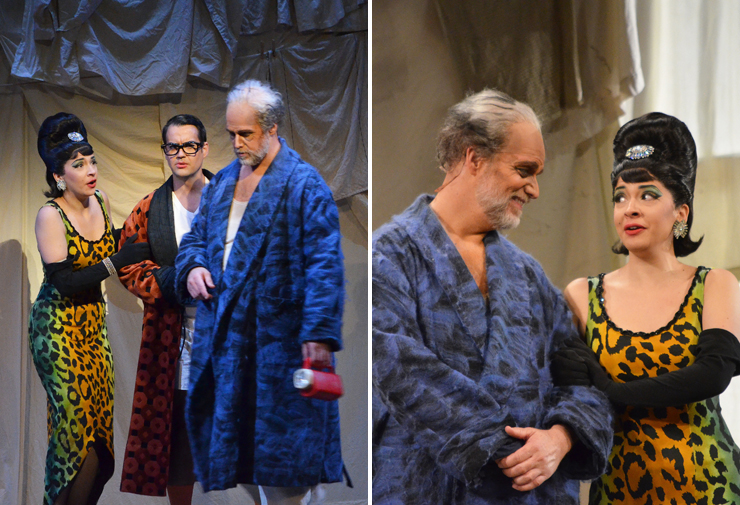 Blustery in character and tremendous with his facility for patter (a must for a basso buffo), Irmiter played all the required domineering, confusion and ultimate humiliation with great comic timing and honesty.

Irmiterâs basso was rich and enthusiastic as he navigated the bel canto (âAh, un foco insolitoâ), singing of the fire that had suddenly gripped him, and his patter was distinctive and remarkable when singing a duet (âAspetta, aspetta, cara sposinaâ) with his physician, Dr. Malatesta (baritone Marco NisticÃ²), plotting revenge on Norina. Irmiterâs characterizations, from befuddlement to defiance while confronting a decked out Norina (âSignorina, in tanta frettaâ) worked well as a result of playing his big voice with true sincerity.

The perky and petite Tatulescu possesses a strong soprano, capable of the soaring runs, flutters and speedy clarity required for Norina. Her musing on how to ensnare a man (âSo anch'io la virtÃ¹ magicaâ) was delicious, claiming, ââ¦a charm of a smile, a seductive lookâ¦ are some of the thousand tricks to get my way in life.â Her duets with all three of the men were on the money, Tatulescu adjusting her character to fit the moment and man with whom she was dealing. Announcing that she was ready to carry out their elaborate plan, masquerading as Dr. Malatesta's sister to trick Pasquale into marrying her (âPronta son; purch'io non manchiâ), she and NisticÃ² matched up nicely for the lively duet. Tatulescu ascended and bloomed into her upper voice as NisticÃ² coached her on how to act "cat-like," a sexy persona she would exhibit throughout the opera. During the confrontation between Pasquale and Norina, Tatulescuâs detachment and indifference played beautifully against Irmiterâs bewilderment (âVia, caro sposinoâ), dismissing him with ââ¦go to bed, Grampa,â her splendid runs a high point. She combined effectively with tenor JesÃºs Ãlvarez (Ernesto) for the love duet (âTornami a dir che m'amiâ), Donizetti sublimely and beautifully crafting the final intertwined notes with the tenor voice on top and soprano on the bottom.

The diminutive Ãlvarez, playing Pasqualeâs timorous nephew, showed good voice quality but lacked the power needed to sell the two big ariaâs Donizetti provided for the character. After being disinherited (âCercherÃ² lontana terraâ), the requisite nuanced lovesickness for Norina was present in Ãlvarezâs voice, though he seemed to be reaching for his high notes rather than rising commandingly into them. Later, serenading Norina (âCom'Ã¨ gentilâ), Ãlvarez rendered the aria with a pleasant voice underscored by a solo guitar. Where the tenor had the opportunity to sail the final money note of this aria out of the ballpark, Ãlvarez hit only a triple.

NisticÃ² played Pasqualeâs physician, the crafty Malatesta, with just the right amount of "over the top." The tall and agile baritone was determined every step of the way, shrewdly manipulating everyone and improvising his way to the happy ending. His resonant voice was an ample match to the other voices, humorous when describing the "angel" he had chosen for Pasquale (âBella siccome un angeloâ), lively in the duet with Norina planning their masquerade for Pasquale (an audience favorite), and keeping up the pattering pace alongside the Don in the plot for revenge on his cheating wife. 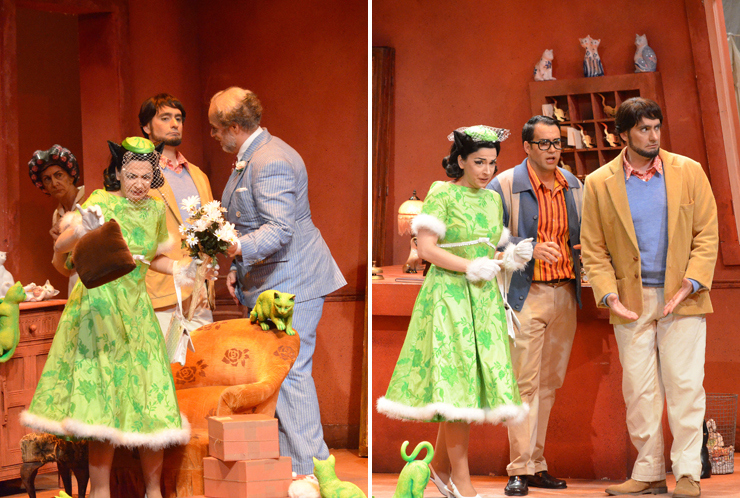 A couple of quartets were musically rich and well played. During the signing of the marriage contract, the four voices united beautifully in a rich melodious harmony. Now as man and wife, with Norina victorious on every level, a full on quartet laced with voluble patter finished up the romp, as the voices merged harmoniously to the erupting applause of the audience.

All was revealed by the chorus and principals in the final (âLa moral di tutto questoâ), the humbled Pasquale learning the moral of the story: âHe who marries in old age must be soft in the headâ¦ fortune doesn't usually go your way.â The voices rose resoundingly as the old bellhop returned with a box containing (wait for it) a puppy, mitigating Pasqualeâs cat allergy.

The spirited FGO chorus, playing the penzione staff and guests, were in fine fettle as they bustled about with Norinaâs adornments and reveled in the "comings and goings" of the plot, Donizetti setting it with a waltz tempo, perhaps intentionally suggesting that the farce is exactly that â a waltz.

Stage director Renaud Doucet cleverly moved the players to pull off the sleight of hand embedded in the plot. His stage business was creative â a haunting solo trumpet playing while the old bellhop shuffled through his hotel routine, or the chorus entering the fray by way of the frantic ringing of the reception desk bell.

Designer AndrÃ© Barbe set the stage in 1960s Rome in a small hotel, the Penzione Pasquale. The lobby is loaded with cat statuettes and figurines. Around the perimeter of the lobby are laundry lines, which block the view to the street and also cover the second floor, later to reveal a courtyard terrace cafÃ©. Television antennae sprout from the roof. In Act II, the furniture has been replaced with ultra-modern furnishings.