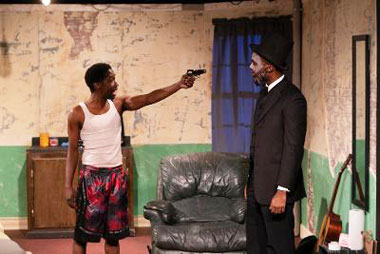 Booth (Roderick Randle, with the gun) and Lincoln (Denzel McCausland) appear in one of "Topdog/Underdog's" more intense scenes. (Photo by Olimac Media)

Main Street Playersâ (MSPâs) mostly strong professional production of the Pulitzer Prize-winning drama, âTopdog/Underdog,â includes peeling wallpaper as part of Danny Nievesâ fine set design. But while some of the wallpaper seems scraped away, large chunks remain. Fittingly, for this play, it might symbolically suggest that you cannot scrape away your entire past. Rather, parts of it can linger and haunt.

Certainly, in Suzan-Lori Parksâ complex, engrossing, darkly comic play, the past hovers unwelcomingly over the lives of black brothers Booth and Lincoln. For instance, the siblings find themselves stuck with their names, which their parents gave to them as a joke. And despite Boothâs attempt to erase a part of his past by changing his name, it stubbornly remains â and foreshadows a grim future for both brothers. In fact, as the play opens, the siblingsâ present is not exactly being kind to them. 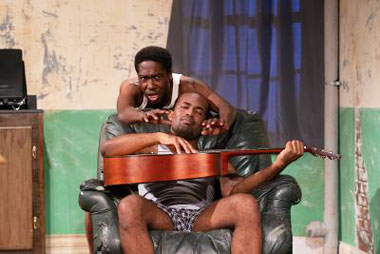 In âTopdog/Underdog,â a present day-set, modern Greek tragedy running through Sunday, Oct. 16 in MSPâs intimate space in Miami Lakes, Lincoln and Booth live together in a small, dilapidated dwelling. They are barely able to make ends meet.

Lincoln used to be a con artist by tricking people out of their money through the confidence card game Three-card Monte. But after he witnessed how the game could result in deadly violence, he quit in favor of a more respectable job.

While Lincoln put an undesirable part of his past to rest, a dark period of American history hangs over his new job. Specifically, Lincoln impersonates former President Abraham Lincoln at an arcade. In reality, he simply sits in costume, which includes the use of whiteface. While he sits still, spectators shoot blanks at his head, simulating Abraham Lincolnâs assassination in a theater by actor John Wilkes Booth. Actually, Lincoln (Parksâ fictional character) does not seem to mind the job; it brings in money and is not difficult. But Lincoln learns that his boss might replace him with a wax dummy.

Meanwhile, Booth (Lincolnâs brother) is a thief, stealing fancy clothing, among other things. Booth admires his older brotherâs skill as a former successful Three-card Monte dealer. And he wishes to partner with his brother to form a Three-card Monte confidence operation. Apparently, he sees that game as his ticket out of poverty. So, Booth tries to perfect his banter, imitating phrases he has heard hustlers use on the street. Also, Booth asks his brother for feedback. As Booth tries to perfect his act, the playâs riveting rising action leads to an explosive climax and a shattering ending. 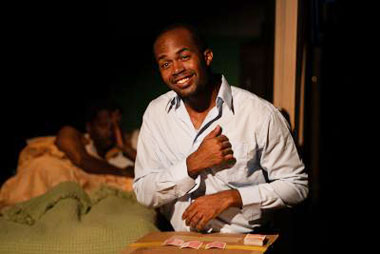 Parks is the first African American woman to win the Pulitzer Prize for Drama. She is a prolific, multi award-winning, experimental playwright who is profoundly talented. Specifically, she uses uninhibited, imaginative language, and infuses her plays with original stage imagery, irreverence, and humor. Further, Parksâ work subverts theatrical convention, exhibits historical consciousness, and provokes thought. It is hard to categorize her work; she writes in many styles and uses varied characters and genres. Parks works with themes such as racism, sexism, sibling rivalry, poverty, gender roles, and history shaping the present.

In âTopdog/Underdog,â Parks uses heightened language to less extent than in her other works. But this accessible, funny piece features strong conflict and, at times, you can relate to the workâs two characters. While the brothers are highly competitive and tend to bicker and fight, it is clear that these two complex individuals love each other.

âIf we worked together, it could be like old times,â Booth says, perhaps remembering a time when he and his brother were particularly close. Even when they behave less than desirably, Parks does not judge them.

While the siblings are hardly saints, they have experienced a painful past. For starters, their parents left them when they were 11 and 16. As a result, the boys had to fend for themselves while their folks eloped with different lovers. You cannot help but wonder whether the boys witnessed their parents cheating on each other, and what effect that might have had on them. But just when you want to condemn their parents, Lincoln tells us that each of them was running from different hardships in their pasts. And while they hoped to get rid of those hardships by changing their lifestyles, that apparently did not happen.

The brothers, who are in their 30s during the short time that elapses during the playâs roughly two-and-a-half hours, are each striving for their share of the American Dream. But as is true for countless African Americans past and present, that dream remains elusive for Booth and Lincoln. One need only read todayâs headlines to find âTopdog/Underdogâsâ relevance to the present.

In addition to Main Street Players, other theater companies have found the piece timely enough to warrant new productions. To be specific, a Broadway revival of âTopdog/Underdogâ will open this fall (the play premiered on Broadway in 2002). Further down the road, Palm Beach Dramaworks will mount its own production from May 26-June 11 of next year. By the way, South Floridaâs Zoetic Stage produced its own powerful production in 2017.

Main Street Playersâ production is largely a success, although it tends to drag toward the end. The reviewed performance lasted about three hours, including an intermission. 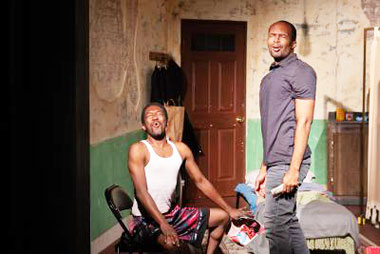 Under director Carey Brianna Hartâs assured guidance, tension slowly builds until the action reaches a boiling point. While tension gradually builds, much of the production moves swiftly, like the fast, cunning moves and spiel the characters use as they deal the cards.

While the brothers are at each otherâs throats at times, Hart makes sure to also highlight close moments between them. This helps us care about the characters. Hartâs direction emphasizes the differences between the siblings, which a pair of supremely talented actors convey seemingly effortlessly.

Roderick Randle is cocky, impulsive, dramatic, and intense, yet impressively natural as Booth, the outspoken, hyper younger sibling. Randle never tries to elicit laughs or show off for the audience. Rather, his characterâs traits seem a natural part of him.

Randle acts with his entire body and often leans forward in an aggressive position, ready to pounce. When he moves, he sometimes stalks across the stage, charging or pacing like a trapped wild animal. Palpable anger, frustration, and intense inner pain emanate from Randleâs voice and through his telling gestures.

Meanwhile, Denzel McCausland is impressively natural and understated as the quieter Lincoln. Speaking in soft tones, McCausland lends Lincoln a polished, unassuming demeanor. The actor makes it look like his Lincoln takes things in stride, and does not easily get upset.

Fortunately, McCauslandâs performance does not lose a speck of spontaneity or realism when he increases his performanceâs intensity. While the actorâs Lincoln can be calm and quiet, he can also grow frighteningly intense when pushed too far.

McCauslandâs portrayal is so natural it looks and sounds more like an on-screen performance or even a documentary as opposed to live onstage. But it works on Main Street Playersâ stage. That is partly because the space is so intimate. Also, you have to credit the sound design by Nieves and Hart for allowing us to clearly hear each and every word.

Behind the scenes, Nievesâ set design of Boothâs apartment, the playâs sole setting, is compact and detailed. When we look at the set it resembles an old, dilapidated, plain dwelling with peeling wallpaper that exposes bricks. The bed looks like the kind you would find in a jail or prison cell, with sheets that look more like rags. Clearly, a person of little means lives here. Colors such as green, grey, off-white, and brown bring some life to the otherwise drab set.

Costume designer Angie Esposito effectively contrasts the formal, fancy clothes that Booth steals from the plainer clothing that the characters wear at other times.

Also behind the scenes, Alejandro Milianâs lighting design is appropriately realistic and squarely focuses the performers.

Stories about siblings often feature palpable tension and intense conflict. Certainly, the Biblical tales of Cain and Abel, as well as Joseph and his brothers come to mind. In addition, Lyle Kesslerâs drama, âOrphansâ rivets with its intensity, while Harper Leeâs âTo Kill a Mockingbirdâ remains touching and terribly timely.

With its smart writing, âTopdog/Underdogâ deserves to be called literature as much as Leeâs beloved tale, a hugely successful Broadway adaptation of which is touring the country.

Credit Main Street Players, a former community theater that has turned professional, for tackling such a timely, challenging piece of live theater as âTopdog/Underdog.â

Main Street Playersâ production of âTopdog/Underdogâ runs through Oct. 16 at the companyâs theater, 6812 Main St. in Miami Lakes. Show times are 8 p.m. Friday and Saturday, as well as 2 p.m. Sunday. For tickets, go to www.mainstreetplayers.com/season.