Miami New Drama's 'A Wonderful World' Is a Show Stopper

Bob Thiele and George David Weiss, the lyricists of Louis Armstrongâs 1968 hit song, âWhat a Wonderful Worldâ were optimists. That is, if you believe their words.

Indeed, amid the hustle and bustle of daily life, they were able to stop, see, and savor âskies of blue, clouds of white, and red roses, too.â 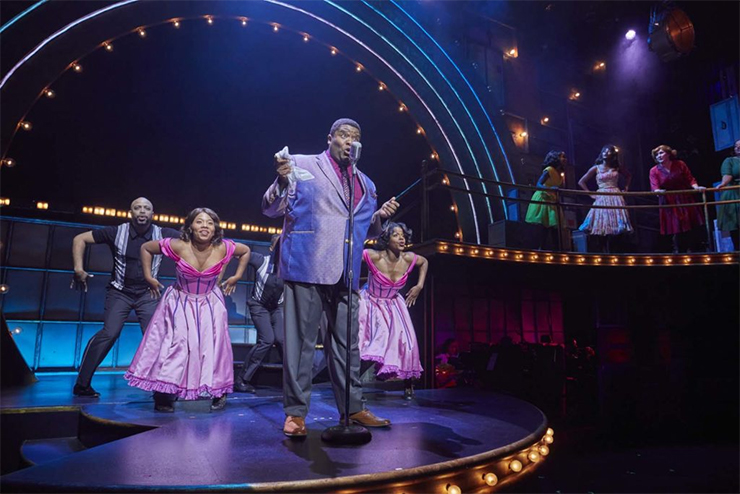 Juson Williams as Louis Armstrong and members of the cast of Miami New Drama's "A Wonderful World." (Photo by Ernesto Sempoll)

Sure, it feels good to be positive and optimistic. And it can be healthy emotionally. However, there are times that call for reality and balance. In particular, while writing a show about someoneâs life, especially someone as complicated as Armstrong, thoroughness and balance can help an audience receive as complete a picture as possible of the person.

An unflinching and complete portrait

Fortunately, in the epic and glorious, bold, sexy, and stylish, heartfelt and heartbreaking new bio-musical, "A Wonderful World," librettist Aurin Squire paints an unflinching and complete portrait of Armstrong.

The production runs through Sunday, Jan. 16 in a marvelous world premiere production by Miami New Drama.

No doubt, many will remember Armstrong, the late American icon and trumpeter/vocalist (1901-1971). In "A Wonderful World," we witness not just the glory and the beauty that characterized Armstrongâs life, but also the darkness and ugliness.

Also, on one hand, Armstrong was a man so angry at America that he changed the words to the âStar Spangled Banner.â He did so in a shockingly vulgar manner. But we also meet the âAmbassador of blues, the king of jazz, Reverend Dipper mouth, Duke Satchmo, the legendaryâ¦Louis Armstrong.â That is how an announcer at a concert describes him.

"A Wonderful World" tells Armstrongâs true story from the shifting perspectives of his four wives. More specifically, Squire neatly organizes the musical into chapters. Each represents one of his four wives. The show begins with Chapter Oneâs Daisy Parker, the âNew Orleans Woman.â And it ends with Lucille Wilson, the âNew York Woman.â In between are Lil Hardin (âChicago Womanâ) and Alpha Smith (âHollywood Woman).

Depending on which woman is narrating, we hear different, even contradictory things about Armstrong. And, in the end, the musical leaves us with much more than a mere peak into the life and soul of a complex man.

This roughly two-and-a-half-hour musical (including an intermission) practically covers Armstrongâs entire life. Even so, "A Wonderful World" is not a tell-all, chronological musical. Neither is it a simple âjukeboxâ musical with little to no connective material stringing songs together. Rather, the showÂ  covers the highlights and lowlights of Armstrongâs life. While doing so, it features many songs that he sang and made popular. The musicalâs creators include arrangers Michael O. Mitchell and Annastasia Victory. They have ordered the songs so that they fit in thematically and make sense within the context of Armstrongâs life.

Actually, the musical begins with Armstrongâs funeral. Then, it flashes back to his childhood before covering his adult life.

Louis was âraised in the brothel, like me,â according to first wife Daisy Parker. During his early years, Armstrong allegedly committed an act that landed him in front of a judge.

âI doubt anything good is going to come from your time here on Godâs Earth,â the judge remarks before sentencing Armstrong.

How wrong âHis Honorâ was. After all, Armstrong would become one of the most recognized entertainers in the world. How he achieved success and fame, as well as notoriety, makes for compelling storytelling in A Wonderful World.

As Armstrong, the big, yet nimble Juson Williams delivers a top-notch performance. It is blessed with variety, energy, and believability. In the beginning, the actor injects his character with wide-eyed wonder and excitement, naivete, eagerness, and almost unbridled, youthful charisma.

The actor, who boasts a strong, expressive, rangy and pleasant voice, does not speak or sing in Armstrongâs signature raspy voice until later. There is a reason why the legend's voice became raspy, according to this show. And when Williams adopts that now-familiar gravelly voice, the actor sounds like Armstrong without imitating him.

Williams does not try to mimic Armstrong. Rather, he captures the manâs essence. The performerâs wide, bright smile is as telling as his moist eyes and painful facial expressions during tough times.

While Williams also credibly captures Armstrongâs anger and bitterness, he is never unlikable. In fact, even when Armstrong vulgarly sings the âStar Spangled Bannerâ as âthe anthem my people know,â we do not become repulsed. That is because Williams makes us empathize with Armstrong's pain.

To his credit, Squire unblinkingly writes about the racism occurring during Armstrongâs lifetime. Surely, with racial tension and violence suffusing society today, it is hard not to wince when, during the show, we hear about a lynching. Grating sound effects enhance the uncomfortable feeling (the sound designer is Kai Harada).

This is hardly the only tense moment in the show. Another occurs when Armstrong and his third wife, Alpha, are riding a bus to a tour venue. Suddenly, Armstrong âjustâ¦canât breathe.â

In Savannah, Ga., Armstrong exits the bus. Soon after, he runs into a decrepit-looking man walking slowly and dressed in rags (Ari Fulton designed the period, character-revealing costumes). 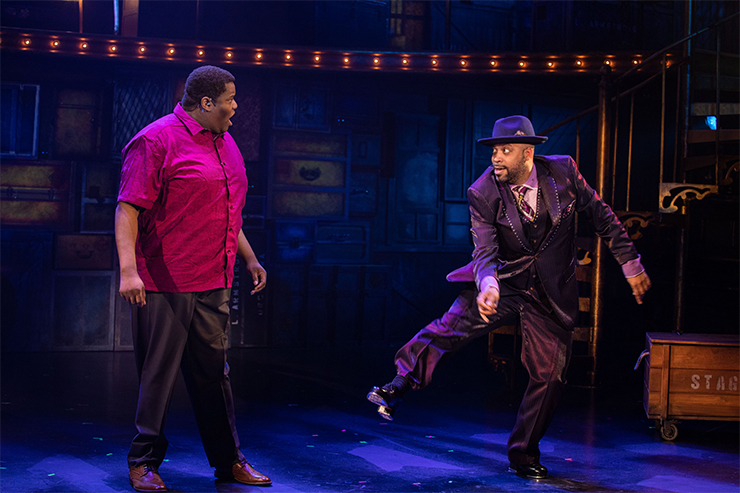 Jason Holley, right, as Lincoln Perry, and Juson Williams as Louis Armstrong in "A Wonderful World." (Photo by Stian Roenning)

The man whom Armstrong runs into is Joseph âKingâ Oliver. He was a mentor to Armstrong... and a key figure in the first period of jazz history. Earlier in the musical, Gavin Gregory lent the character a vibrancy. It is absent from the bent-over man moving at a turtleâs pace. âAll the money dried up and no one wanted to pay for big band jazz,â Oliver explains. As to why Oliver did not return to Chicago or New Orleans, he says, âI didnât want people to see me like this.â

Actually, there were also times when the people in Armstrongâs life would have preferred to keep the jazz great hidden. After all, speaking unapologetically frank, as Armstrong had been prone to do, can hurt oneâs image. People such as Joe Glaser apparently pleaded with Armstrong to tone it down.

Glaser was an artist manager. Many knew him for his involvement in the careers of musicians. They included Armstrong and Billie Holiday.

Miami New DramaÂ  is a daring, nonprofit professional company on South Beach. During its roughly six-and-a-half years of existence, it has been committed to creating groundbreaking work unique to Miami's diverse region. MINDâs typical show costs $300,000, according to a published article. By contrast, "A Wonderful World" reportedly cost $1.2 million to producer. Among other things, it calls for a cast of 18 and a seven-member live band. That band provides energetic accompaniment without drowning out the performers.

In April of 2020, the cast and crew were participating in the productionâs sixth preview performance. Opening night was nearing. Then, the pandemic happened. However, Artistic Director Michel Hausmann, Managing Director Nicholas Richberg, and their team never gave up hope of mounting the musical. Kudos to the company for persevering. They are giving a wonderful world premiere to a show that seems destined for Broadway.

"A Wonderful World" is a musical that recognizes that the world in which we live, and the one in which Armstrong lived, is not all beautiful and wonderful. In fact, shortly after the beginning, a womenâs chorus sings about a âmarvelous, glorious, riotous, delirious, painful, shameful, black 'n blueâ world.

Miami New Drama's world premiere production of "A Wonderful World" continues through Jan. 16 at Miami Beach's Colony Theatre, 1040 Lincoln Road. Performances are at 8 p.m. Wednesday through Saturday, 1 p.m. Saturday, and 3 p.m. Sunday. To watch video from the production, go to www.miaminewdrama.org. And for tickets, go to miaminewdrama.org/show/a-wonderful-world. You can also call the box office at (305) 674-1040.