Straightening Out the Bad Boy...

...Well, no, not really, and that, in part, is what leaves the feeling of dissatisfaction when watching Visiting Hours, New Theaterâs latest offering. Not that we want rainbows and doughnuts at every final curtain but seeing unlikeable characters change not one whit hardly fosters care and concern. 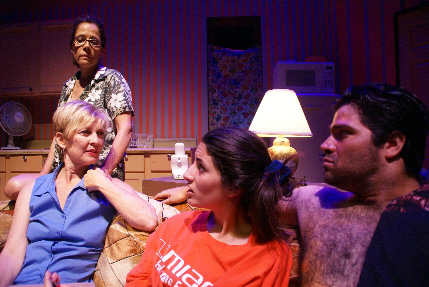 A middle aged lesbian couple, Beth and Marian, live above the garage of a Coral Gables home owned by Nat, also middle aged, also a lesbian and a predatory alcoholic. Marian has a son, Paul, in jail for beating up a woman. Paulâs girl friend, Shelly, a psychotic runaway, breaks into Beth and Marianâs apartment while they are out. She is seeking bail money for Paul, but Beth and Marian have no money; they paid off Paulâs gambling debts. So Marian uses their car as surety to spring Paul. You see where all this is going?

Barbara Sloan is Marian. Sheâs guilt ridden, blaming herself for Paulâs failures, hasnât seen him or heard from him in two years and spends most of her time driving the streets, hoping to catch a glimpse somewhere, anywhere. A little whine, anyone?

Madelin Marchant in a solid, grounded performance is Beth, Marianâs longtime partner and sees Paul with a much clearer eye than his mother.

Kit Marsh, as Nat, desperate for affection, plays the lonely drinker well. Marina Corina Ramirez as Shelly acts in all directions at once, watchable at times, annoying at others.

Alex Alvarez, a big man, spreads the snake oil with ease, the ultimate dodger of all responsibility with no care for others.

MOVIES: Denis Villeneuve's Dune is a richly textured adaptation of Frank Herbert's seminal 1965 sci-fi novel about political intrigue. Find out what Ruben Rosario has to say about the new film.

THEATER: Musicals are back and the one at the Wick Theatre in Boca Raton features a large, high-energy cast. Marvin Glassman has the review.