Guests camped in elaborate tents, along the soft white-gray sands of the natural beach over the four days, retreating into a romantic, peaceful haven, soaking rays in the days, enjoying the non-stop live entertainment, and sleeping under the stars at night. The festival brought vital recreation, art, culture and education to South Florida. Meanwhile, a sense of community was built as partnerships were nurtured with local organizations such as the Zen Village zenvillage.org), Emerge, U-Doodle, and Moksha Family Arts Collective, which promote wellness, sustainability, education and the arts. 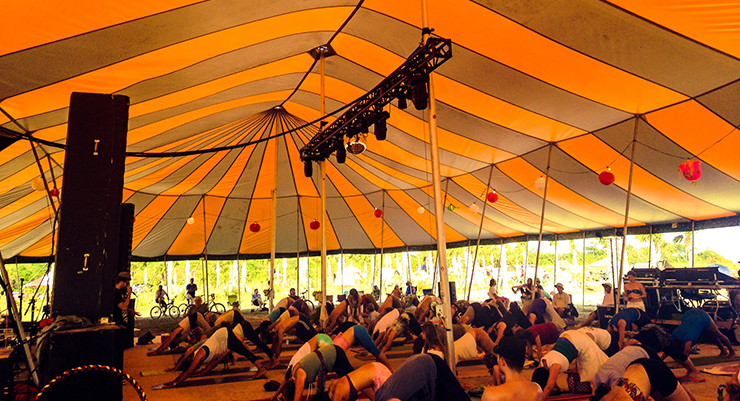 In a traveling circus-like atmosphere, colorful tents were set-up across the historical, preserved natural land. Each pavilion contained a unique world, allowing visitors to experience live music from bluegrass and folk to hip-hop and funk, live painting from well-known local artists, yoga, delicious food, and spirituality. Among the sheltered universes were the The Dance Tent, Zen Village Station, Sustainability Pavilion, Meadow Stage, The Kids Village and Moksha Family Arts Collective.

In the large brown-orange The Dance Tent, energy healing yoga and hooping workshops were conducted; at the Zen Village Station, Tibetan Buddhist Master Tsai from the Zen Village in Coconut Grove hosted sound healing rituals, and tea ceremonies gave participants a chance to experience culture; in the Sustainability Pavilion various local groups that support sustainability educated attendees on urban gardening, composting, and bicycle maintenance; over at the Meadow Stage, live folk, reggae, Latin, bluegrass, country, hip-hop and rock music as performed as people danced; and the Moksha Family Arts Collective had their own stage where live music, painting, and fire dancers awed audiences. 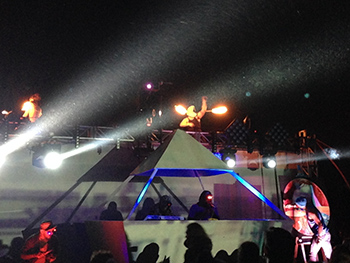 Donna the Buffalo (www.donnathebuffalo.com), a bluegrass, folk, reggae, and country rock band, held the first GrassRoots Festival over twenty years ago. According to vocalist Tara Nevis, after playing many similar festivals, the group decided to start their own festival. The band members had friends who were diagnosed with AIDS, so the GrassRoots Festival was originally founded as a non-profit supporting the fight against AIDS, as well as the arts and education. Held in the musicianâs hometown, Trumansburg near Ithaca, New York, the Finger Lakes GrassRoots Festival of Music and Dance now attracts over 20,000 visitors every summer. Upon the success of the seasonal festival, Donna the Buffalo organized the Shakori Hills Grassroots Festival.

Modeled after the original summer festival, the Shakori Hills festival has taken place every fall and spring in Silk Hope, N.C., near Chapel Hill since 2003. Lucky for South Floridians, The Virginia Key Beach Park was chosen as the spot for the winter festival, which has been successful for just three years now. The amazing festival brought a community seeking a platform for environmental sustainability and healing through the arts together for good times and good vibes. Hopefully, the relatively new festival will continue to grow in South Florida.