Cuban Spring: It's All About The Love 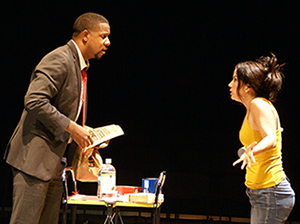 Vanessa Garcia's "Cuban Spring," is a nice piece about nice people and so you care. You watch and see the family love and you're happy. Clever woman, that Vanessa.

Receiving its world premiÃ¨re at the New Theater, "Cuban Spring" has a veteran cast handling the anguish of those American born Cubans unable to visit Cuba, not because of political restrictions, but because of the ingrained resentments and longings of their own family members.

Tanya Bravo excels as Siomara, the edgy, newly pregnant wife of John, a black man who dragged himself from the gutter to success in the white world and who knows no Spanish and understands little of Cuban culture. Ethan Henry, with his wide range, gives a fascinatingly frustrated portrayal of John. Miguel (Carlos Orizondo) and Olga (Evelyn Perez) are Siomara's parents, Orizondo quietly grounded and well loved and Perez bursting with enthusiasm and care for her family. Nick Duckart (Dionysus) is Miguel's brother, loudly bilingual, ready for any adventure, unfortunately with less stage time than the others and that's a shame, for Duckart always entertains.

"Cuban Spring" is staged lengthwise in the theater. At one end is Miguel and Olga's home, nothing pretentious, pastel walls, tiled floor and two Adirondack chairs in a room facing a painted beach and ocean which at the far end of the stage laps against a foreshore surmounted by Spanish doors. The audience is seated on both sides of the lengthy stage, necessitating tennis match sight lines.

Well directed by Ricky J. Martinez, this is a play about secrets, husband and wife, parents and child. Playwright Garcia has filled her two acts with incident after incident; there are monologues, yes, but this is not a talky affair. It's a different and interesting look at the dreams and secrets of expatriats in Miami.

Rob Eastman-Mullins designed the set and Johnathan Bulgini the lighting. The sound designer is Erik J. Rodriguez and Marcia Kreitman designed the costumes. All are well done and enhance the Cuban experience.