âTo Seep and Bleed into the World.â a title to pique our sense of the oblique for Daniel Domigâs early summer exhibition at the Diana Lowenstein Gallery, Wynwood. A first showing in Miami, Canadian born Domig is presently based in Vienna, where he studied painting at the Academy of Fine Arts.

The Diana Lowenstein Gallery has been a fixture in Wynwood Arts District since 2006, providing a wide swath of work from 1989 onward in the international art stage, and an active promoter of largely Argentine works in South Florida since 2000 representing over 40 multinational artists at this writing. 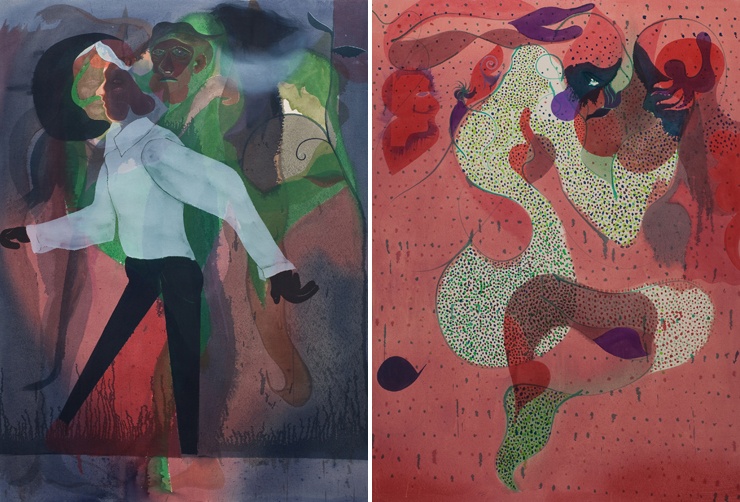 Recently working together with Ombretta AgrÃ³ Andruff as curatorial advisor for the Diana Lowenstein Gallery program, this synergistic collaboration has produced several intriguing exhibitions in the past few years. The latest is no exception. AgrÃ³ arrived in Miami via a beginning in Italy, moving on to a 15-year pause through New York before alighting in South Floridaover 3 years ago. She is a tour de force in Miamiâs creative genre.

AgrÃ³ Andruff and I discussed the genesis of bringing Daniel Domigâs âTo Seep and Bleed into the Worldâ exhibition to Lowenstein.

Irene Sperber: In what way did you connect with Domig's work? It appears very emotional, etherial and somewhat disturbing to me. What was your gut reaction to the pieces, and have your thoughts changed as you become more familiar with his work?

Ombretoo AgrÃ³ Andruff: âI saw his work for the first time last year in Vienna at a gallery where he had a solo show. As for all of my art encounters mine was a very visceral response to the work. As you said, there is something unsettling and disturbing, in a fascinating way, in his work that attracted me. His paintings somewhat reminded me of Dumas' work which I love. And when I checked his website I fell in love with the way he was displaying the paintings in a fully immersive type of installation so we decided to do something similar for Diana's gallery.â 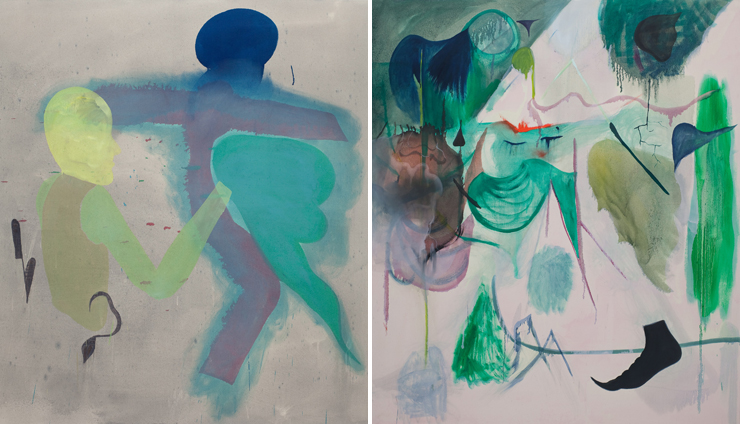 âCan't say that my response to the work changed over time but certainly my appreciation increased after talking to him on several occasions and reading his insightful writing about painting.â

IS: How did the pairing of the new installation running inside the gallery walls emerge?

OAA: âI proposed to him to do a show that would also include an installation versus the type of show I saw in Vienna which was in a small gallery and where only paintings were exhibited. He came up with the idea of using the center wall of the gallery as the anchor of the entire show after I shared with him the floor plan and images of the space.â

IS: How does this exhibition relate to Lowenstein Gallery's core values in what you showcase?

OAA: âOne thing I enjoy a lot about my collaboration with Diana is that she is open to new ideas and we both have a very visceral response to the artwork we look at. And luckily we are very much on the same wavelength when it comes to the kind of art we appreciate and are intrigued by, so most often than not when I approached her over the last 18 months with ideas about curated exhibitions or artists to consider she reacted very positively.

After viewing Domigâs work more closely, I begin to understand the relationship between the paintings and the naming of this show âTo Seep and Bleed into the World.â The flow and melding of paint from one clear subject to another is otherworldly, reminiscent of a dreamlike state.

I attempted to pick at Domigâs deeper self to glean more information, and received thoughtful comments from the artist, which he chose to explain in one flowing narrative:

DD: âItâs interesting that you mention the work being disturbing. In the past I have found that the viewers often experience the paintings as something of a Rorschach image. They end up seeing quite a bit of their own being reflected in the many transparent layers of paint. This is in part because the paintings are quite literally stuck within the process. They are exhibited as âfinishedâ work only in the sense that I feel they have reached a moment of saturation that can sustain the viewers gaze. Many paintings however return to the studio and are worked on further.

This state of âunfinishednessâ is perhaps often read as an âuneasinessâ and evokes something uncanny. However, it is the experience of the viewer rather than the narrative of the painting that is unsettling. The reason why so much of art doesn't manage to unsettle is answered by the stipulation within your second question: âart as the expression of thoughts.' "

âAlthough it is the way much painting is practiced, it is an approach I fundamentally disagree with.

Art is not about executing or expressing our thinking, but about an intimate encounter with the material of our work and ourselves as human beings. If it stays in the realm of our thinking it will constantly tell us what we already know. But poetry, which painting is one form of, doesn't attempt to tell us what we know, but exposes that which we cannot see or pre-conceive.

Because of my disinterest in painting as âpicturesâ my influences often are literary rather than pictorial. Especially the work Samuel Beckett has had a lasting impact on my thinking and introduced me to a way of working within the âunresolvedâ. Painting is all about remaining within that obscure momentum, constantly renegotiating forms, colors and composition.â

âThe work in the gallery allows the viewer a small glimpse into the often neglected but essential process of painting: the waiting for the painting to take the next step.â

Domig shared that the title for the show. â(It) comes from a wonderful novel by the name of Lacuna, written by an unknown author under the name of O.Boyd.â

The gallery will host a conversation with artist Daniel Domig and curator Ombretta AgrÃ³ Andruff prior to the opening reception, starting at 6 p.m.

DANCE: Screendance 2022 is underway and there are events and screenings all over town. Michelle F. Solomon has the preview.

THEATER: The musical "Gypsy" has been done by some of the greats and so many times before, but at the Wick Theatre in Boca Raton, this Mama Rose is an original. Marvin Glassman has the review.