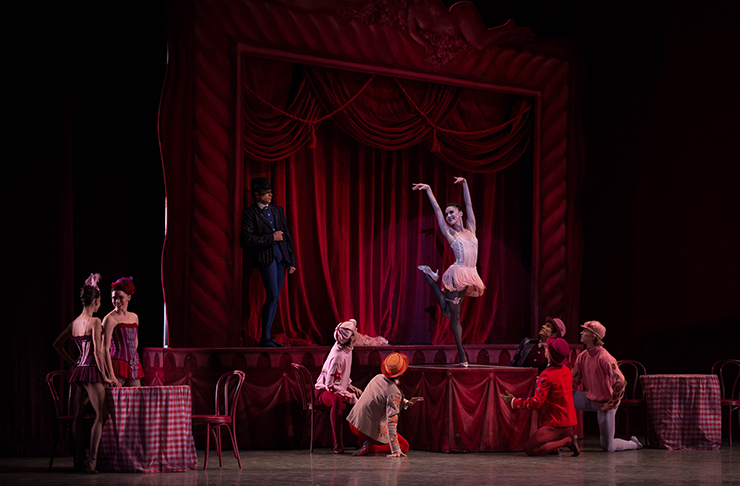 Miami City Ballet opens their 34th season with three masterworks that comprise a program with an exciting range.

âSlaughter on Tenth Avenueâ is the title of the entire evening, as well as the title of George Balanchineâs audience favorite "story within a story: that hails from Broadway. The late Paul Taylor is also honored.Â  His feverishly fast and balletic âMercuric Tidingsâ shows contemporary dance at its finest. To top it off, sheer dance and technique is displayed in Balanchineâs tribute to his long time musical collaborator, Igor Stravinsky, in âStravinsky Violin Concerto,â a piece that is known in dance history as Balanchineâs own favorite ballet.

In phone interviews, two dancers and one ballet rÃ©pÃ©titeur (one who stages ballets) offered their internal knowledge about dancing the ballets, the opportunities to stretch their artistic abilities, and what it is like to repeat a ballet and grow within personal demands and expectations.

Jordan-Elizabeth Long is a familiar MCB stage presence. Audiences are used to seeing her statuesque presence as the Dark Angel in âSerenade,â Titania in âA Midsummer Nightâs Dream,â Myrtha in âGiselle,â or as the green girl in âDances at a Gatheringâ among the many roles she dances. Long is most often known to carry the elegant and ever technical ballet roles, mostly on pointe, in some of the most demanding ballets. 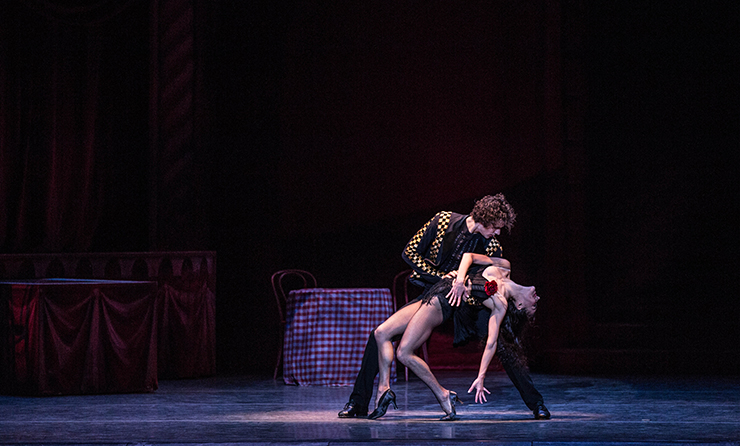 This opening season, however, she is switching gears, well, not the demanding part, but namely, Long is being cast as the lead role of the stripper in âSlaughterâ and in Taylorâs contemporary, âMercuric Tidings.â

âSlaughter on Tenth Avenueâ has quite a history. With choreography by Balanchine, it was the first ballet within a musical and the first to advance the action of the story. It was the story within a story, of the Broadway musical comedy, âOn Your Toesâ that was created in 1936 by Richard Rogers and Lorenz Hart. The original lead role of the hoofer was Ray Bolger and the stripper was Tamara Geva. âSlaughterâ also introduced the word "choreography" to Broadway, at Balanchine's request.

The stand alone ballet, âSlaughter on Tenth Avenue,â entered the repertory of the New York City Ballet in 1968 with Balanchineâs muse, Suzanne Farrell in the lead role partnered by Arthur Mitchell as the hoofer.

Long grew up seeing clips of the ballet with Farrell in the title role. She spent several summers studying with her as a teenager. She says it was a dream come true to be dancing the role Farrell originated. 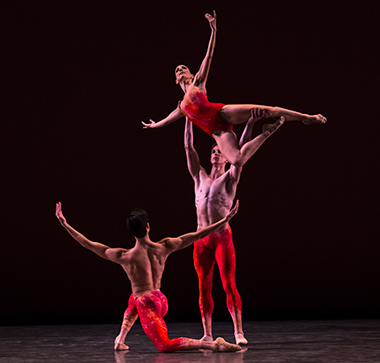 âThis is the first leading role that Iâve had without pointe shoes,â Long said. âActually, this entire program, Iâm not putting on pointe shoes at all so itâs really stepping outside of the box for me. It is so different from anything Iâve ever done. My hair is down, Iâm having a blast, dancing to this awesome music. I think that is what is so exciting.â

One would think that all these elements very untypical of a ballet dancerâs focus, would make performing a role such as âthe stripperâ a piece of cake. Not so.

Long says, âDancing in heels is actually quite hard. Your weight is different and you have to think about where your balance is. I dance a lot of technical parts, so Iâve had to approach this differently. Working out how the steps are coordinated and musical. For âSlaughter,â Iâve almost had to start from square one. Itâs not really ballet technique that we do every day in class. How do you make the steps look best on you? There are a lot of very difficult rhythms.â 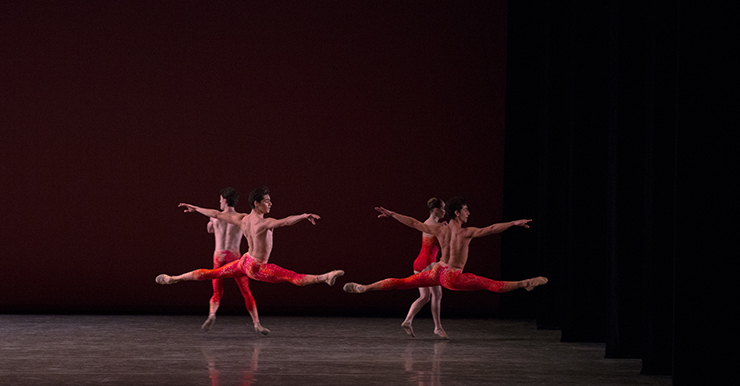 Because it is a story within a story, Long carries the role of a dancer in the show as well as an actor in the bigger show.

âOne thing Suzanne (Farrell) always taught us was to bring who you are into your dancing, so Iâm trying to bring my own âJordanâ side to it.â

Long is also working on âMercuric Tidings,â her first time ever doing a Paul Taylor work.

She says, âOf everything that Iâve done at MCB, these two ballets are the most different. Iâve really tried to pay attention to the way my colleagues are doing the Paul Taylor choreography and movement style.â

Patrick Corbin, a former Paul Taylor dancer, and present faculty at the USC Glorya Kaufman School of Dance, has been working with MCB on âMercuric Tidings.â He has had a relationship for numerous years with the company in staging Taylor works.

Corbin says, "They take to the style very well. Since Iâve developed a relationship with Joni (Latham, MCB ballet master) who was a Taylor dancer in MCB, she has an understanding of the work. Iâve actually had people who joined the company as apprentices who are now principals who have worked with me throughout their entire careers. Usually the Taylor pieces create opportunities for newer people in the company to shine and to learn. Theyâre initially in the ensemble and then they start moving up and on in the Taylor pieces, as well as move into their life in MCB, so itâs always a rather natural relationship. Itâs part of the institutional memory of MCB."

"Mercuric Tidings" is probably one of Taylorâs most balletic pieces,â Corbin continues. âThe word that Taylor used when he devised the piece was 'travesty.' It is so fast, and so bright with this ridiculous music, beyond huge at points, Itâs always a little tongue and cheek to me, and it was to him. What I love about the MCB dancers is that they honor the weight and how you use the back, but then they have those beautiful lines that are just insane. Iâm in heaven.â 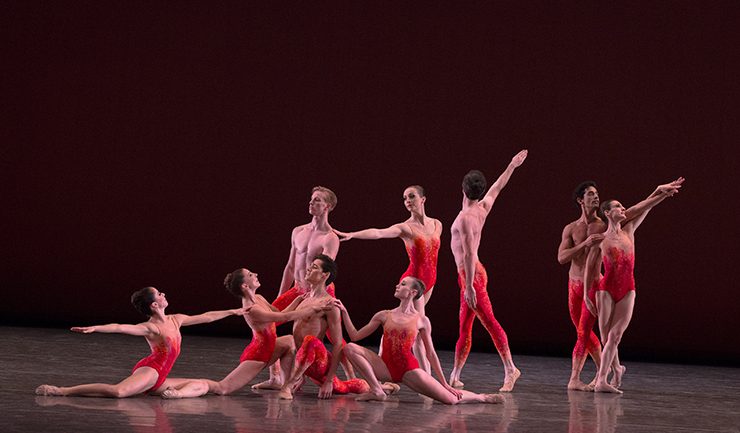 With the Broadway infused âSlaughter on Tenth Avenueâ and the exhilarating âMercuric Tidings,â the plotless ballet "Stravinsky Violin Concerto" completes the program with the sheer joy of dance.

Katia Carranza, having danced in the ballet when it was performed by MCB a number of years ago, is revisiting the same role. The ballet has two main arias, or pas de deux, and Carranza is performing the second aria.

"I performed the role before, but it feels like I just learned it again," Carranza says. âIt is a real challenge for me to dance this ballet again. It is very romantic with a lot of connection to my partner. He has a lot of control, he is the one who leads every movement.â

The ballet has numerous sections and every entrance is different. It culminates with a joyous finale of sheer dance.

âThe first pas de deux is very different from mine. I see it as more contortionist movement. The couple dances a little more separately.â

After its initial premiere in 1941, Balanchine reworked the ballet to become a merge of dance and music. It premiered it in 1972 at the opening of New York Cityâs Stravinsky Festival. He wanted to pay homage to Igor Stravinsky who had just passed away. Dancewise, the movement is very typical Balanchine and typical of Balanchine, it is very musical.

Carranza says, âYou can really tell in the expression with the body and the movement of Balanchine that he really used his music and he thought about how each step could work best. I think every time you perform something, you try to do it better, try to do more.â Carranza continues: âIn this case, I have Lourdes (Lopez) who danced the same part that I do. She is really helping me with her experience in the moment, giving me tips and telling me what helped her in this step, how to count this part. It is very nice to have her help.â

The masterwork ballets will launch the Miami City Ballet season at the Adrienne Arsht Center with performances in Fort Lauderdale and West Palm Beach to follow.

$15 student tickets areÂ  at the theater one hour before a performance. Tickets are subject to availability. More information at miamicityballet.org/studentdiscount.