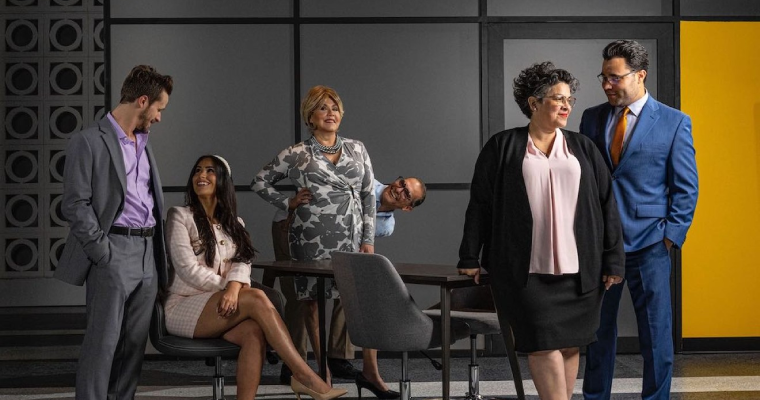 While Carmen Pelaez loosely based her hilarious, fast-paced, and intense new play, "The Cuban Vote," on Shakespeareâs "The Taming of the Shrew," there is, thankfully, hardly a hint of misogyny in the new piece.

Quite the contrary, "The Cuban Vote" at Miami New Drama features at least one strong female character. And she will not allow one of the men in her life to push her around. Actually, if anybody is doing any pushing, it is her.

The female characterâs name is Carolina Clarens. She is a no-nonsense, blunt-speaking, issues-driven candidate for Miami-Dade County Mayor. However, her unabashed, even arrogant style is not resonating with voters. And, so, a slick political consultant from Washington, D.C. named Alex Mesa enters the scene to polish Clarensâ rough edges.

And then, things get interesting and complicated, as they often can in the world of cutthroat politics â especially in Miami.

Certainly, if the enthusiastic reaction during a recent performance is any indication, Miami-area theatergoers have grown fond of the play. However, one of the big questions will be how audiences in a city with few Hispanics react if it plays outside of Miami.

Pelaez has included quite a few lines of dialogue that begin in English and end in Spanish. She's also sprinkled in one or two Spanish words in the middle of other sentences.

For members of the audience familiar with the words, they laughed loudly and for long durations. But for those who didn't know a smidgen of Spanish, some of the dynamics were lost. How about listing Spanish words with their translations in a program. Or pop up a subtitle now and then? 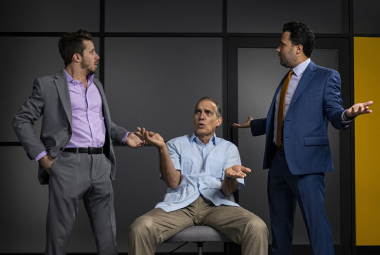 "The Cuban Vote" is a satire about, among other things, how some candidates and voters prize style over substance. Gilberto Ruiz is such a person. One moment, his head rests on a table in a Miami bar. He is so drunk he may not even know his own name. But after Mesa and his friend, Benji Carbonell, work some magic, voila! He is suddenly running against Carolina and soon gains quite a following. You likely will laugh heartily at how Mesa and Carbonell manage to get Ruiz in the race, seemingly right after his drunken state.

Speaking of Carbonell, he has a personal reason to hope that Clarens defeats Ruiz. He is engaged to Clarensâ sister, Blanca. And he believes that she will not be able to marry him until Clarens wins the Mayorship.

The fictional campaign in the play pits style (Ruiz) against substance (Clarens) as both candidates vie for, among other things, the coveted Cuban vote.

The candidates address issues important to Miamians without making the race solely a matter of Red vs Blue. But "The Cuban Vote" is hardly a dry, tedious piece filled with jargon. Quite the contrary, parts of it are juicy. Audiences will feel as though they are flies on the wall as they experience the inner workings of a campaign. We also witness the backstabbing, double-crossing, romantic complications, ugliness, maneuvering, and wisecracking that can come with political campaigns.

"The Cuban" Vote is a focused piece; there are no distracting subplots or characters. And the action will rivet your eyes to the stage. That is mostly because the actors are delivering high-quality performances, led by director Loretta Greco. She paces the production well, smartly stages each scene, and ensures key moments and phrases receive the proper emphasis. In addition, Greco has coaxed believable performances from the actors, who also demonstrate deft comic timing.

Pelaez not only wrote "The Cuban Vote," but stars in this world premiere production as Clarens. Pelaez, speaking quickly in an often-sharp voice, commands the stage. She imbues Clarens with confidence and toughness, bringing to mind Mama Rose from "Gypsy." Clarens likely also had a dream, since she worked for her father, a well-respected former Miami-Dade mayor. Sitting in suspense, wondering if Clarensâ dream of becoming Miami-Dadeâs mayor will come true is part of the beauty of the play.

Jonathan Nichols-Navarro portrays Ruiz with a winning charm that would draw people to him like a magnet. The performer also lends Ruiz a folksy demeanor. To his credit, Nichols-Navarro turns Ruiz into a comical character, but not a caricature.Â

Andhy Mendez is the listed performer portraying Mesa. However, for the reviewed performance, Daniel Capote played the role and did it quite well. In particular, Capote conveyed a convincingly cool, confident demeanor. He also imbued Mesa with a sense of urgency as the campaign grew intense. Further, Capote used telling gestures to accentuate his characterâs spoken words. 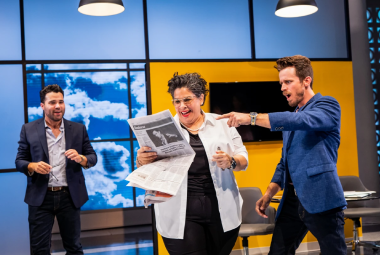 Meanwhile, Kristian Bikic injects Carbonell with natural charisma. Carbonell speaks some of the playâs most descriptive words. Speaking about Clarens, he notes that, while campaigning, she âgoes for the jugular. Tearing them to shreds without breaking a sweat. Standing victorious, as her prey twitches and convulses, watching them twist in the wind until it blows them away. She sits back, lets them play big shot, cause she knows sheâs the tiger watching pero he doesnât know heâs the mouse. Sheâs deciding whether or not she wants to eat him or swat him away.â

Assuming the aforementioned is all true about Clarens, her mother, Ofelia, is not nearly as vicious. Evelyn Perez plays her with grace, polish, and elegance, giving her a loving, supportive demeanor.

Also, Marcela Paguaga plays Carolinaâs sister, Blanca, with a supportive air and exudes charm and warmth. From Paguagaâs portrayal, it is easy to see why Carbonell would want to marry her.

Behind the scenes, Yuki Izumiharaâs projections help place us in Miami with breathtaking depictions of the beach and ocean, complete with waves in motion. On top of those sights, the projections include views of the Everglades and Biscayne Bay.

A striking set complements the projections. The set designers are Christopher and Justin Swader. They have created an elegant-looking set, featuring tall, imposing columns. Also, a palm tree graces the set. Set pieces move with ease on and off the stage, allowing for smooth transitions between scenes.

Add "The Cuban Vote" to the long list of triumphs Miami New Drama has achieved in its six years of existence. With the addition of a guide to the Spanish words in the play, the piece likely has a long theatrical life ahead of it.

Miami New Dramaâs production of "The Cuban Vote" was scheduled to end on May 15. However, due to popular demand, it has been extended it a week. Remaining performances continue 8 p.m. Thursday, May 19 through Saturday, May 21 and a matinee at 3 p.m. Sunday, May 22. For ticket prices, and to buy tickets, go to miaminewdrama.org. Miami New Drama is at The Colony Theatre, 1040 Lincoln Road, Miami Beach.