'Most Wanted' Premieres At Theatre Lab 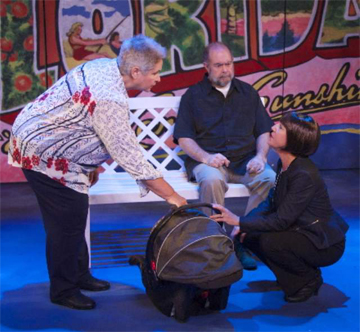 If you're of a certain age (read OF) you for sure know a damn sight better than your offspring. Especially when it comes to gram and grampy parenting a tiny bundle of wails and dirty diapers.

So you do something about it. You boost the baby, leave town with your daughter boiling bile and angst, and try to convince yourself you're doing it all for the child. Good luck with that.

And that's the premise of âMost Wantedâ an unusual piece by Peter Sagal that was published twenty one years ago after winning an award at the Eugene O'Neill Playwrights Conference.

It has never been produced. Until Lou Tyrell mounted it at FAU's Theater Lab where it's running through Dec, 17.

Curtain up on a ha ha sitcom set in pre Y2K, as Gram Doris (Beth Dimon) lies to a Florida motel owner (Michael Gioia), saving money on a single instead of a double for herself and Grampy Frank (Michael H. Small). Frank's mantra: the maid didn't leave sanitary paper stretched over the lavatory seat. And then oops, they left the stolen baby in the car.

Jokes, jokes, a little expo, and the tone of the piece slowly changes as the kidnapping duo try to justify their lives. Poignancy arrives, tenderness not far behind. âMost Wantedâ becomes a play about memories.

The heart of this ninety-minute one act is the talent on stage. Michael Gioia, joined by Niki Fridh and Matt Stabile, play multiple roles and their versatility is a delight. Fridh as a pawn shop owner, a butcher, an old woman stroke victim and the daughter, mother of the stolen child. Stabile switches effortlessly from tough guy detective to milquetoast father of the baby. And Gioia from motel owner to Truman house tour guide to lonely old guy. These mini snips of characters are unforgettable. And the running gag is that all the characters look familiar to each other.

Beth Dimon and Michael H.Small are perfect as the baby snatchers, loving mother and child but determined to carry out their version of âproper parentingâ.

All this is presented on a versatile set by Michael McClain, opening with a back drop of a hokey old postcard: Greetings From Florida, The Land of Sunshine.