Over 50 Theater Troupe Proves Itself The Second Time Around

The new theater troupe Pigs Do Fly Productions set the stage for its offerings when it produced its first short play fest last May focusing on works for people over 50 using actors and directors in the same demographic.

It proved a success. So, here we are again. Pigs Do Fly Productions is serving up its second dose of Fifty Plus plays with A New Attitude.

The show features six 10-minute plays directed by Beverly Blanchette and Marj OâNeill-Butler:Â MemoirÂ by Donald Steele; Remote Control by Connie Schindewolf; Buddhists in the BasementÂ by Mary Beth Smith; Rainbow Sprinkles by Stacey Lane; Your Kiss is on My List by Christopher Lockheardt, and Mrs Greenblattâs Place in the Universe by Sharon Goldner. The six actors who play a multitude of parts are Todd Caster, Adela Del Rio, Kerry Sensenbach, Elissa Solomon, Troy Stanley and Janet Weakley.

Tidbits and tasty morsels describe the mÃ©lange, with some of the shorts having more success than others. Yet, overall, A New AttitudeÂ is a worthy night of theater as a send off to summer and an ushering in of fall. The overall attitude carries a cohesive "last harrah" vibe â carefree with not a lot of fuss and muss. 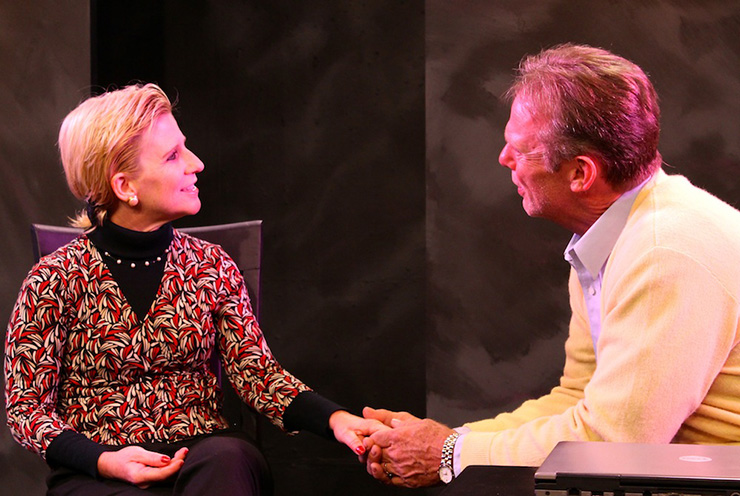 First up, Memoir,Â directed by OâNeill-Butler concerns a former D.C. senator (Caster) who has decided, in his retirement, to pen a memoir about his Inside the Beltway life. The trouble is, he canât get past Chapter 1, Page 1. His supportive wife (Solomon) is by his side with cookies and tea to help him jog some of the memories to get his book off the ground. What ensues is a little bit more information than both of them bargain for. The short is thoughtful and the direction skilled as the two characters dart in and out of the truth and its consequences. Caster as Wayne is believable as the buttoned up politico that finds itâs time for some revelations. Solomon, on the other hand, seems to have Â difficulty conveying the mixed emotions the truth brings to Beverly, or perhaps the character has known these deep, dark Capitol secrets all along? Her portrayal makes this difficult to decipher. 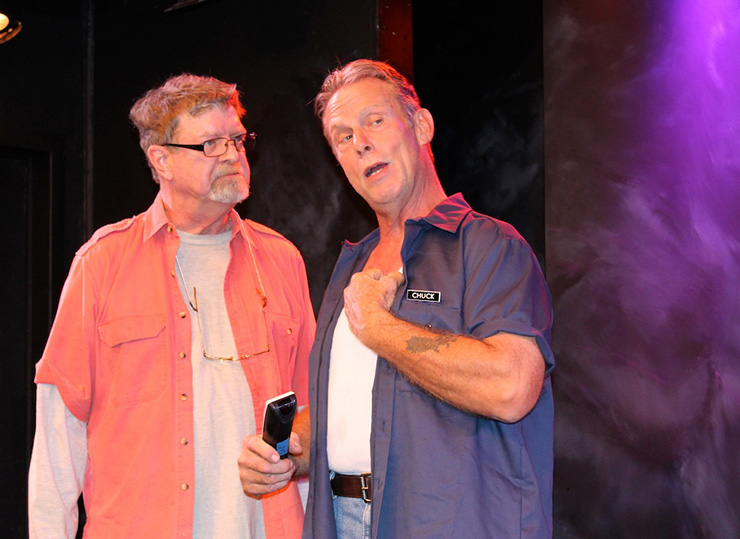 Any sketch that features Weakley is always drop-dead hilarious whether or not the script adds up. In Remote Control,Â she once again proves her comic timing as a cackling housewife who beckons her husband (Sensenbach) when technology gets the best of her. In this case, itâs the complicated television remote from cable company Horizon. Weakleyâs delivery of summoning "Rooooooooy" is funny each time. Author Schindewolf is clever in the playâs twist which creates an On Demand in house technician (Caster) with the wrong flip of a button. Blanchetteâs direction ups the ante with some nice touches â Casterâs pushups and Sensenbachâs switching eyeglasses (one with a chain around his neck for seeing close-up; the other atop his head for far away). The direction is a constant flip back and forth, which is a hilarious bit of business. 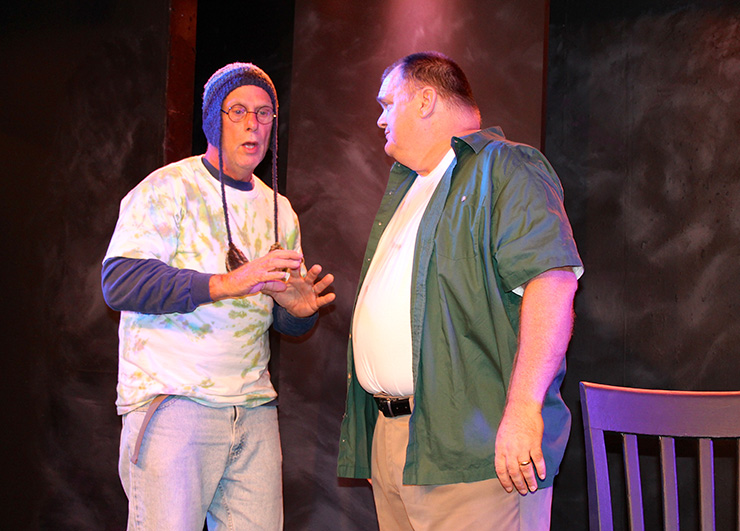 Todd Caster and Troy Stanley in Buddhists in the Basement.

Buddhists in the BasementÂ is one of the weaker plays and itâs fall down is a combination of the script, its direction, and the players. Sadie (Del Rio) who has taken up Buddhism returns home with a secret to tell her husband, Joe (Stanley). Itâs the next in her journey to find herself that has included acting lessons, pottery classes and even joining 12-step group Alcoholics Anonymous, despite the fact she doesnât drink. Yet her newest trend brings two freeloaders, William and Elizabeth, (Caster and Solomon) along with it. The premise is cute enough, but it plays more like a Saturday Night Live skit than a short play. Additionally, the ensemble, directed by Blanchette, seems a bit disconnected to one another in a script that calls for a team effort. 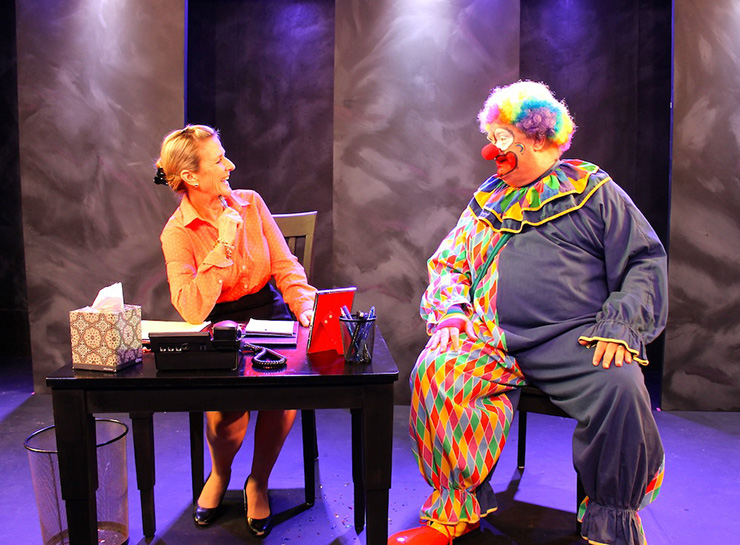 The play that picks things up after intermission is Rainbow Sprinkles,Â again featuring Weakley, who this time plays a politically correct businesswoman, Miranda Giles-Hampton. Sheâs planning a birthday party for her 10 year old grandson and is interviewing entertainers. Sprinkles is definitely the highlight of the evening with Stanley dressed as clown Rainbow Sprinkles (kudos to whoever created Rainbow Sprinklesâ clown makeup!). Laneâs hilarious take on politically correctness being pushed too far takes on everything from Rainbowâs face painting ("what if the children want swastikas painted on their faces?" says Giles-Hampton in horror!) to the rainbow stickers that the clown wears as part of his makeup (a symbol for homosexuality that might offend conservative parents?, Giles Hampton surmises).

Stanley and Weakley play off of each other like a swift ping-pong game, lobbing each otherâs positions back and forth. The direction by OâNeill Butler keeps the game taut and on target. 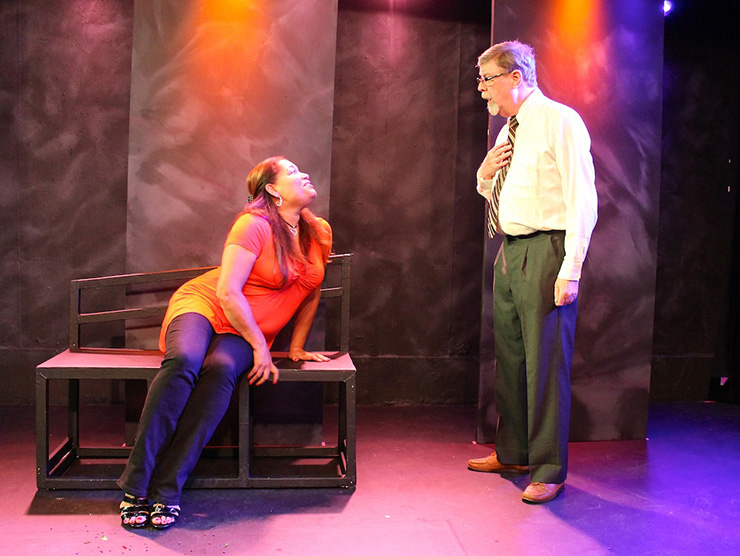 Adela Del Rio and Kerry Sensenbach in Your Kiss is on My List.

Your Kiss is on My ListÂ is a cute distraction with Del Rio as a woman who is obsessed with kissing. The actress has a blast as the flirtatious and spicy Latina (she doesnât just say "yes" about kissing, she says "jes!") who keeps a list of her best kisses. Meanwhile, Sensenbachâs character avoids her game until she touches a nerve and his ego flares to be at the top of her list. Sheâs noted 387 strangers in the memo book she pulls out thatâs tucked away in her bra. She reveals it was only 386 as the first person on her list was someone she knew). 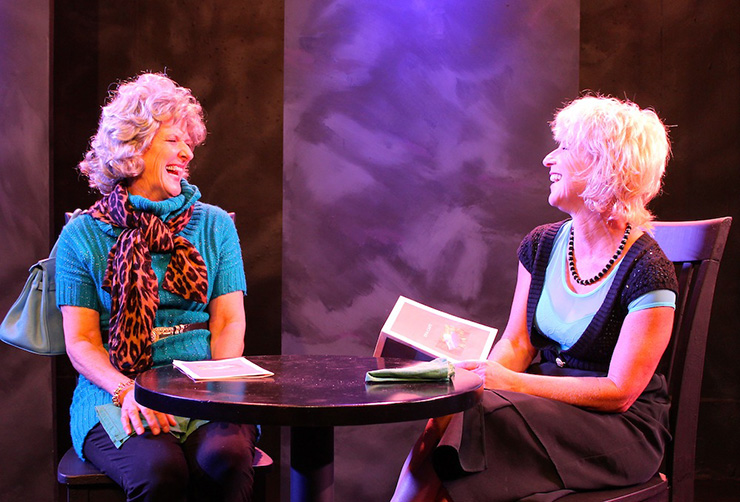 Janet Weakley and Elissa Solomon in Mrs. Greenblatt's Place in the Universe.

The final offering is Mrs Greenblattâs Place in the Universe,Â a commentary on mother-daughter relationships. Weakley as Mrs. Greenblatt shares the same birthday as her 50-year-old daughter, Marcia (Solomon). Mother has chosen the place for lunch, an organic restaurant where the chicken on the menu has been so cared for before its slaughter that itâs been raised by a foster family, while Daughter would have much preferred Cheesecake Factory. Mrs. Greenblatt has a reveal for her daughter. (Note: if it was purposefully done that the first play surrounded personal revelation and the final play does, too, hooray for the smart programming). Solomon shows her acting skill here, really bringing the audience in to Marciaâs "been here, done this before" world, as Weakley plays up the narcissism that sometimes seeps in to senior moments after the children have left the nest. If there ever was a way to portray a characterâs "itâs all about me now" in 10 short minutes, Weakley nails it.

Pigs Do Fly Productions has proven its muster with its short plays. Hereâs hoping that they are in the process of searching for a long form play that suits their mission for their next outing.