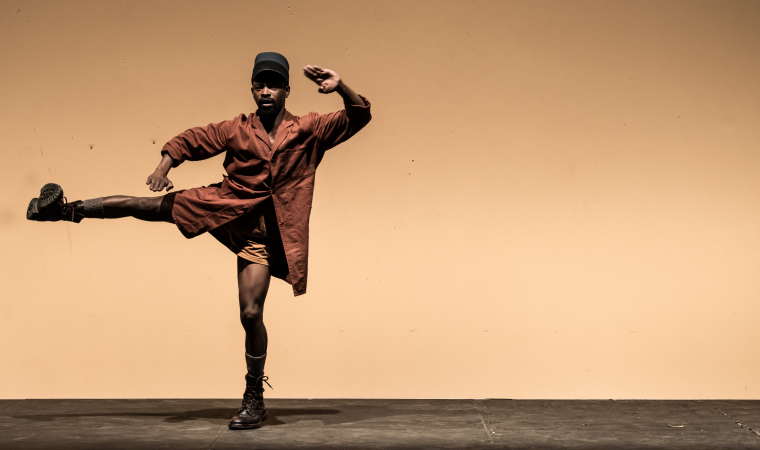 Britain conscripted nearly 100,000 Black Africans to haul materiel through the jungle in WWI. Dancer Thulani Chauke, shown here, has collaborated with The Centre for the Less Good Idea since its first season. (Photo courtesy of Stella Olivier)

Those in the art world know the name William Kentridge. The South African artist's method is multidisciplinary and combines about every discipline from drawing to film, music to theater.

He's created opera productions, his work is in museums in New York, Paris, and London, and his theatrical productions, like all of his practice, are intricate pieces that draw inspiration from African porters in the First World War and the Russian Revolution. 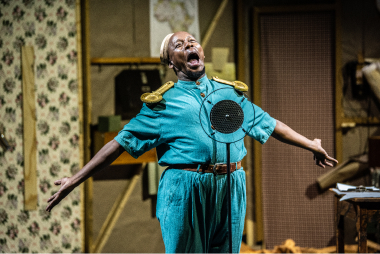 This brings us to "The Head and the Load," which will be at the Adrienne Arsht Center in Miami for only three days and in the midst of Miami Art Week.

Johann Zietsman, president and CEO of the Arsht Center, says presenting Kentridge's site-specific performance was "a once in a lifetime opportunity that we couldn't pass up."

Zietsman talks about the Arsht's ability to present the large show. "The Arsht has one of the largest back stages in the country and there are very few spaces that can accommodate (it)," he says.

With the wings and backstage of the Opera House reconfigured to become a unique, site-specific performance space the audience will take its place directly onstage. Rather than entering the theater from the usual front doors, audiences will be brought to the theater through the backstage loading dock.

Taking its title from a Ghanaian proverb â" the head and the load are the troubles of the neck" â this epic theatrical-music piece tells the neglected story of the millions of African porters and carriers who served British, French and German forces during the First World War. 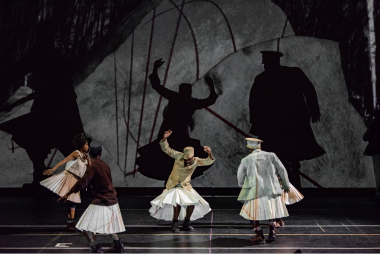 William Kentridgeâs âThe Head & the Loadâ is a massive collage of a performance told in music, dance, projections and poetry at the Adrienne Arsht Center. (Photo courtesy of Stella Olivier)

This has been called Kentridgeâs most ambitious project to date, and draws on every aspect of his practice to combine music, dance, film projections, mechanized sculptures and shadow play in a visionary theatrical alchemy.

"We don't often get to do truly extraordinary world-class events; this is a truly transformative world-class piece," he says.

The epic theatrical-music piece tells the neglected story of the millions of African porters and carriers who served British, French and German forces during the first World War.

Kentridge, teaming up with his longtime collaborator Philip Miller, who is a South African composer, as well as with choreographer and principal dancer Gregory Maquoma, the artists says that the piece is "an interrupted musical procession."

Miami is only the fourth place that Kentridge's work has been presented.

"It's a logistical puzzle," Zietsman says. 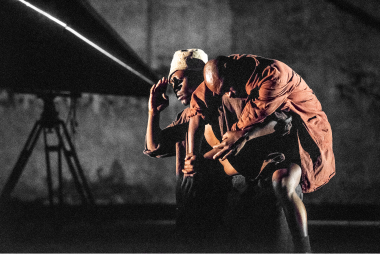 "The Head and the Loadâ captures the brutality of WWI, but also finds moments of tenderness and beauty. âItâs not only the physical load that bears you down,â says William Kentridge, âbut also the psychic load.â (Photo courtesy of Stella Olivier)

About the piece, Zietsman says "As human beings, we do have a blind spot. We tend to experience and tell stories from a particular perspective. Kentridge's work has a clear focus on the invisible stories of the thousands of people who were crucial in that war and who were forgotten."

Roy Cockrum, who helped fund the piece along with support from Valerie Dillon and Daniel Lewis, to bring it to Miami, says that he was "struck by the breadth and complexity of the artistic vision" when he saw it at New York's Park Avenue Armory.

"That was the motivation for the Foundation to find a way to help bring this important and extraordinary work back to American audiences."

"The Head and the Load" will be performed in Miami only for four limited-capacity shows from December 1-3 at the Adrienne Arsht Center for the Performing Arts, 1300 Biscayne Blvd., Miami.

(Helena Alonso Paisley of artburstmiami contributed to this article)