What Keeps Netflix's 'Starling' From Soaring?

Melissa McCarthy in a scene from "The Starling." Photo credit: Courtesy of Netflix.

You want âThe Starlingâ to spread its wings. It's a likable enough film that, considering its subject matter, could have easily been a tough slog. It's headlined by an engaging cast led by Melissa McCarthy in serious mode. With so many dramedies of its kind looking so drab, its polished production values come as a welcome surprise. It deals with people who want to do the right thing but end up making one mistake after another. In other words, this is the kind of fare grown-ups used to go to the movies for but nowadays is just another option in your streaming queue.

Alas, the Netflix release, which hits theaters in limited release a week before it drops on the streaming giant, never really stood a chance. That's because its hard-hitting scenario, concerning a married couple and the sudden loss of their baby daughter, battles for screen time with a parallel narrative that involves the grieving wife and mother McCarthy plays engaging in a turf war with the titular animal. Over her yard. Because territorial birds pecking homeowners is hilarious. Or something. 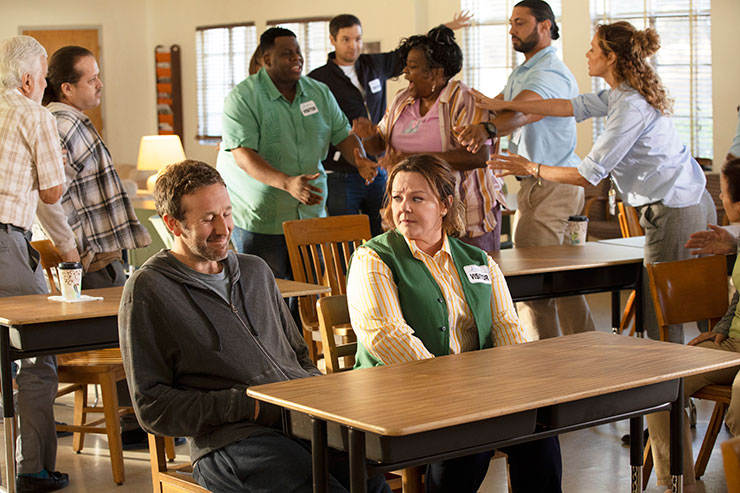 Chris O'Dowd and Melissa McCarthy in a scene from "The Starling." Photo credit: Karen Ballard/Netflix Â© 2021.

From the opening scene, director Theodore Melfi and screenwriter Matt Harris lean heavily on the bird motif and keep pressing that button. Lilly Maynard (McCarthy) and her husband Jack (Chris O'Dowd) are painting trees on the wall of their infant's nursery when Jack suggests adding birds to the bright nature scene. The filmmakers strike a parallel between the majestic creatures and a child's fragility.

The movie then jumps forward in time, after tragedy strikes, to show Lilly appearing distracted at her job stocking shelves at a local supermarket, much to the consternation of her supervisor, Travis (Timothy Olyphant, mostly wasted here). At home, Jack is MIA. A visit to âNew Horizonsâ promptly spells things out. Lilly is soldiering on, albeit barely keeping her head above water, while her husband's reaction to the loss of their baby has landed him in a mental health facility. A committed spouse.

Timothy Olyphant and Melissa McCarthy in a scene from "The Starling." Photo credit: Courtesy of Netflix.

Melfi and Harris eventually fill in the gaps, but instead of enlightenment, the sensation I kept coming back to is frustration. âThe Starlingâ stages just about each exchange between characters as lines someone would say during a session with their shrink. When a group therapist at New Horizons suggests that Lilly consult with retired psychiatrist Larry Fine (Kevin Kline, nicely understated) so she can also âput in the work,â it gives the filmmakers an all too convenient shortcut that allows them to justify their film-as-therapy maneuvers.

Fine, we soon learn, turned his back on a promising career to become a veterinarian, a move that's rather presumptuously insinuated as a step down. Ah, but that impulse to help others hasn't been completely sublimated. The early interaction between McCarthy and Kline hints at the better movie âThe Starlingâ could have been, if it hadn't been so preoccupied with, well, the starling. But the leaden metaphor swoops in to add cutesy pratfalls to a narrative that needed nothing of the sort. 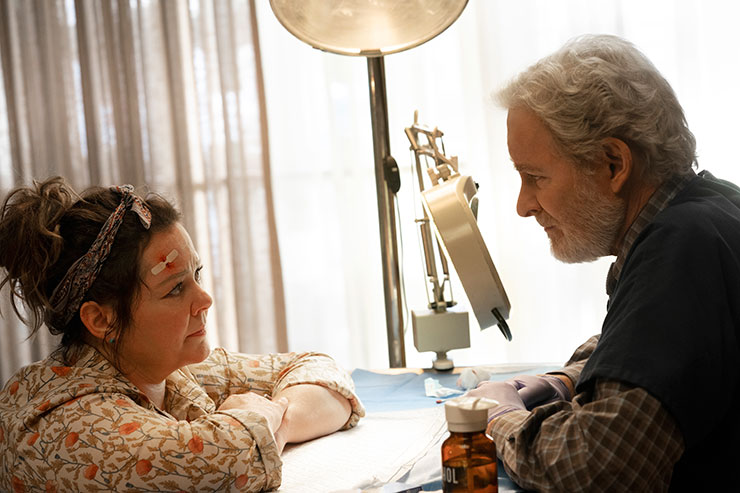 Melissa McCarthy and Kevin Kline in a scene from "The Starling." Photo credit: Hopper Stone/Netflix.

It doesn't help matters that Melfi opted to go the CGI route when depicting the pesky intruder. The bird looks photorealistic enough, but no amount of coding can replace the real McCoy. The distracting virtual co-star brought to mind more than once the work of Carroll Ballard, a filmmaker who on several occasions used the relationship between humans and animals as a conduit through which grief could be channeled. In films like âThe Black Stallionâ and âFly Away Home,â Ballard limited his dialogue to serve a mostly functional role and let his shimmering imagery do most of the heavy lifting. The creatures in these films have a rich tactility, the better to bring to life these stories of overcoming traumatic loss.

To shoot âThe Starling,â Melfi tapped cinematographer Lawrence Sher, a more than capable craftsman to get the job done right. Sher, a frequent collaborator of âJokerâ and âThe Hangoverâ director Todd Phillips, though we won't hold that against him, makes full use of the widescreen format, crafting striking compositions on 35mm. His interplay of light and shadows vividly conveys the characters' anguish.

Melissa McCarthy in a scene from "The Starling." Photo credit: Courtesy of Netflix.

And it's all for naught when McCarthy is saddled with having to spend a sizable chunk of screen time dealing with a feathered aggressor, though let's give props to Harris for offering viewers an explanation for how a supermarket employee and an art teacher could afford their sprawling property. That gives an advantage to O'Dowd. The âBridesmaidsâ actors uses his sad-eyed gaze to provide a window into Jack's inner turmoil. Despite some earache-inducing self-help dialogue, he etches an affecting portrait of a man teetering on a precipice of despair.

Jack and Lilly are messy, imperfect people pretending that everything is fine. The problem is that they're trapped in a movie that purports to keep things messy but follows a beeline to a resolution that ultimately feels like a foregone conclusion. It's the kind of grief narrative that deems it amusing to insert glimpses of a Boston terrier with an affinity for humping strangers' legs. I'm a sucker for doggie comic relief, guys, but this is neither the time nor the place.

It's par for the course with Melfi, a laughing-through-the-tears kind of storyteller who previously gave us Bill Murray as a gruff war vet with a heart of gold in the cloying âSt. Vincent.â (âThe Starlingâ reunites McCarthy and O'Dowd, who starred opposite Murray in that 2014 film.) He also directed the (pretty decent) NASA race-relations chronicle âHidden Figures,â a Best Picture Academy Award nominee that tells a compelling true story about overcoming fearsome odds. It also features scenes of a Black employee's mad dash to reach a bathroom she can use in a segregated workplace. A depiction of institutionalized racism, turned into facile comic fodder. 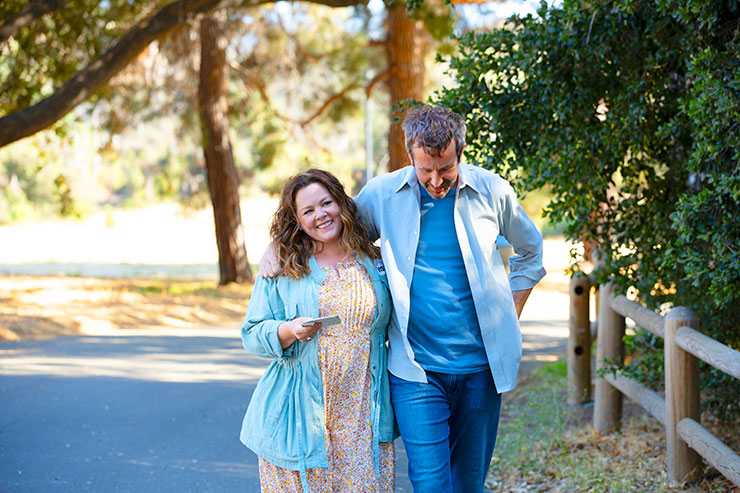 Melissa McCarthy and Chris O'Dowd in a scene from "The Starling." Photo credit: Karen Ballard/Netflix Â© 2021.

But what ultimately derails âThe Starling,â other than a pretty insufferable easy listening soundtrack, is its âbig momentâ overkill. Melfi and Harris allow their characters to deliver extended monologues that pull out all the stops to make others see how they are Having a Breakthrough, or Willing to Fight Like Hell in the Name of Love. It's too much, especially when McCarthy and O'Dowd are more than capable of doing so much with considerably less. Memo to Melfi: next time, give a little more tough love and dial down on the jokes. Also, save the Oscar speeches for the Dolby Theatre. That stuff is for the birds.

âThe Starlingâ is now playing at The Landmark at Merrick Park in limited release. It will be available to stream on Netflix on Sept. 24.