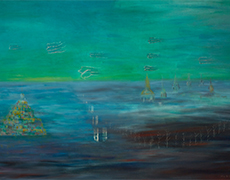 The Museum of Contemporary Art North Miami (MOCA) is proud to present a new exhibition featuring works of French-Mexican surrealist painter Alice Rahon (1904â1987). âPoetic Invocationsâ is guest curated by Mexico-City based art historian Tere Arcq. The exhibition aims to contribute to the scholarship and recognition of under-explored women artists, and to the intercultural influences on European artists in exile in the Americas, whose work was often deeply marked by indigenous and archaic cultures.

Born in France and later nationalized as a Mexican, Rahon joined the Parisian Surrealist circle as a poet, but once in Mexico, she turned her creativity mainly to painting. She became an active a member of a group of European Surrealists artists in exile including Remedios Varo, Benjamin PÃ©ret, Leonora Carrington, and Kati Horna.

Rahonâs production was a far cry from that of her contemporaries. She was drawn to light and color, and established a continuous dialogue between painting and poetry. Her creations brought together Mexican landscapes, myths, legends and fiestas, and she was a pioneer in the use of sand and texture on her canvases, which included subtle graffito markings. Her oeuvre has been overlooked for many years.

âPoetic Invocationsâ marks the first solo show dedicated to Rahonâs work in the United States in 55 years since her exhibition at the Louisiana Gallery in Houston, Texas in 1964. The exhibition examines a robust art-historical moment that emerged in 1940 as an international community of artists fled World War II in Europe and settled in Mexico. It will feature approximately 30 works including paintings, works on paper, assemblages, as well as archival material such as the Dyn journal, original poems and manuscripts and photographs to put an emphasis on RahonÃÂ´s oeuvre as a whole. The exhibition will explore five fundamental themes: art as poetic invocation, the power of the immemorial past, the journal that challenged limits, the volcano and the Mexican landscape and light: the dilution of inside and outside, and the metaphorical experience of the inside out: fiestas and popular art in Mexico.

Rahon exhibited regularly in Mexico, New York and California and had solo shows in Paris and Lebanon. Her last solo exhibition took place in 1986 at the Palacio de Bellas Artes in Mexico City, just a year before her death. In 2009, with the discovery of her archive, Teresa Arcq curated an Alice Rahon retrospective at the Museo de Arte Moderno in Mexico City and then at El Cubo in Tijuana.

Arcq has worked as chief curator at the Museo de Arte Moderno in Mexico City, and as an independent curator has produced many high-profile exhibitions. She has served as a professor of Art History at Centro de Cultura Casa Lamm and published several essays for catalogues on Mexican modern art and women artists in Mexico, as well as Surrealism. She is currently advising the exhibition and catalog for the show Global Surrealism opening in 2021 at the Metropolitan Museum of Art in New York and the Tate Modern Gallery in London. She is also collaborating with the Schirn Kunsthalle Museum in Frankurt and the Louisiana Museum of Modern Art in Denmark for the upcoming exhibition Fantastik Women, in Spring 2020 and writing for a publication on Leonora CarringtonÃÂ´s Tarot and one on Remedios Varo and Leonora CarringtonÃÂ´s creative collaboration. She will be co-curating a Leonora Carrington retrospective for the Mapfre Foundation in Madrid and the Arken Museum in Denmark opening on the fall of 2020.