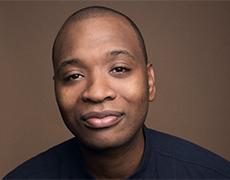 1/1000 is a short sci-fi film and digital theater piece that follows Melvin, a depressed tech worker whose existential and nihilist thoughts have reached a fever pitch due to his isolation amidst a pandemic and racial tensions. After struggling to give proper attention to his job, family and relationship, he receives a mysterious device that gives him access to a mystical menu that can adjust various statistics in his life. This sparks a chaotic shift in his reality, for better and for worse.

He was last seen on stage in ACTUALLY at Gablestage and on screen in the digital series GROWN, which aired on COMPLEX Networks. His creative accomplice Edson Jean and he wrote, produced and acted in the series after winning the Project Greenlight Digital Studio competition with Ben Affleckâs and Adaptive Studioâs support. They have gone on to write local feature films such as LUDI, an Oolite Arts supported project scheduled for release in 2021.

Written works include THEM BEAUX at the Miami Theater Center, CLICK CLACK, a digital theater piece with New City Players along with original one-person shows SPACE APES at Broward College and OPEN at Micro Theater Miami.

He is a proud alum of New World School of the Arts and holds a BFA in acting.

He is excited to be working with Gablestage and is honored to be an Engage Grantee.