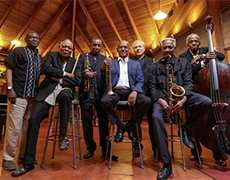 Experience counts, especially in jazz. The more time musicians spend interpreting tunes and interacting with others, the more articulation an audience can expect. You can hear the fruits of such work in the expressive language The Cookers bring to the bandstand and to their six critically acclaimed recordings, Warriors, Cast the First Stone, Believe, Time and Time Again (which was the iTunes Jazz CD of the year in 2014), The Call of the Wild and Peaceful Heart and Look Out!. This exciting all-star septet summons up an aggressive mid â60s spirit with a potent collection of expansive post-bop originals marked by all the requisite killer instincts and pyrotechnic playing expected of some of the heaviest hitters on the scene today.

Each member of the Cookers has spent time leading his own series of groups, and each has a keenly individual sound. But itâs the unmistakable power of teamwork that makes this music so commanding and resonates with a kind of depth and beauty that speaks of the seasoned track record of its principals (combined, the group has over 250 years of experience in the jazz world and has been a part of over 1,000 recordings). You can feel the collective weight of that experience in their CDs and especially in their live performances.

After fourteen years together, The Cookers, who âembody the serious-as-death commitment that it took to thrive on the New York scene some four decades agoâ (Andrew Gilbert, The Boston Globe), recently released their sixth album, Look Out!, the follow up album to their five critically-acclaimed recordings, Warriors, Cast The First Stone, Believe, Time and Time Again and The Call of the Wild and Peaceful Heart. On Look Out! again the incredibly high level of musicianship has only increased with the latest offering of fresh, challenging, boundary-pushing music from these legendary, revered, veteran improvisers.