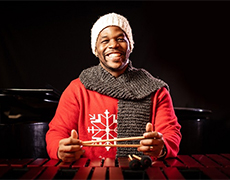 Thereâs no shortage of Christmas music out there that can evoke the holiday spirit. But it takes a master of groove and swing like Warren Wolf to conjure a true feeling of Christmas Vibes. On his album, the vibraphone great and father of five offers an album of jazzy Yuletide cheer sure to provide the ideal soundtrack to the season for the hippest families on the block.

Warren Wolf has established himself as the foremost straight-ahead vibraphonist of his generation, a bop torchbearer well equipped to carry the mantle of forebears like Bobby Hutcherson and Milt Jackson.

Wolf takes an even more prominent role than usual on Christmas Vibes, playing all the piano and keyboard parts as well as spotlighting his usual virtuosity on the vibes. In part, it was the outcome of necessity: the album was recorded in mid-March, just as much of the country was beginning to shut down due to the COVID-19 pandemic, necessitating some last-minute changes of plan. But it also gave the leader a long-overdue opportunity to showcase his multifarious talents.