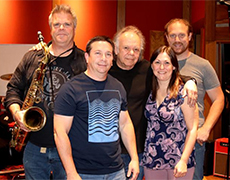 Carl Filipiak has earned critical acclaim as one of todayâs most dynamic jazz guitarists. Jazziz Magazine has included him among a renowned list of guitar players in their nominations for âNew Fusion Blood,â and JazzTimes calls him âa dazzlingly versatile guitarist.â

Many of his recordings and performances have paired him with some of the industryâs finest musicians including Dennis Chambers, Victor Wooten, and Grammy nominee Bob Berg. His recordings on Geometric Records and Art of Life Records have garnered him reviews in such prestigious publications as 20th Century Guitar, Billboard, Guitar Player, Guitar World, Jazziz and JazzTimes. Turner Broadcasting and NBC Sports have featured Carlâs music in several televised events, including the Olympics. His current group, Carl Filipiak and the Jimi Jazz Band released their third album âWhat Nowâ on Geometric Records. Featuring originals co-written by the band and a version of the Beatles âStrawberry Fields Foreverâ, their music brings the spirit of the sixties into the 21st Century. âWhat Nowâ has been on the RMR Top 50 Jazz Album Chart for 20 weeks peaking at #2! It reached #4 on the NACC Top 30 Jazz Chart and made the Most Added Chart at Jazzweek. The âWhat Nowâ title track reached #1 and âStrawberry Fields Foreverâ was #6 on the RMR Top 50 Jazz Song Chart for the week of January 6, 2018. The band includes Carl Filipiak on guitar, Frank Young on drums, Paul Hannah on sax, Matt Everhart on bass, and Rachel Hall on vocals/guitar.