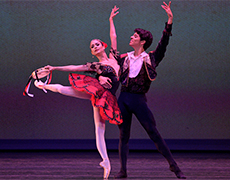 Cuban Classical Ballet of Miami presents the premier of "Spanish Classical Nights", in collaboration with the Sanctuary of the Arts Choreographic Ensemble, on Friday, February 10 at 8:00 p.m. at the Miami Dade County Auditorium.

Following the Spaniard roots of CCBM, "Spanish Classical Nights" will include some of the best of classical Spanish repertoire, where both the subject and the styles are clearly Spanish. This emphasizes the relationship between classical ballet and traditional Spanish dance, which has influenced the repertoire of both the nineteenth and twentieth centuries. Including "Paquita" Suite, "Esmeralda" Pas de six, "Don Quixote" Pas de deux, and others.