Indie staple/podcaster Kevin Smith takes that reliable âwrite what you knowâ rule of thumb as a deceptively mundane departure point in his latest offering, a cheeky slice of gallows humor-tinged body horror called Tusk. What begins as a sardonic satire with thematic echoes of the French farce The Dinner Game veers into decidedly bizarre territory once the Clerks director begins showing his cards, which he does with heretofore unseen command of the medium. 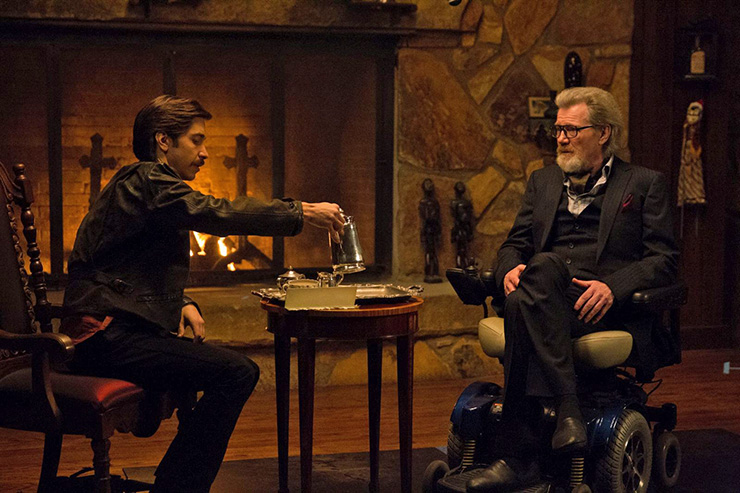 It helps that Smith has cast Justin Long in the (rather unlikable) starring role. The Apple commercials vet is saddled with playing Wallace Bryton, a contemptible â wait for it â podcaster who takes off for Canada to interview a young man who has become a viral sensation for a video clip that shows him wielding a sword â light-saber-kid style â with quite the unfortunate outcome. His on-air partner in crime in the Not See Party podcast (get it, get it?), chubby, nebbishy Teddy Craft (The Sixth Senseâs Haley Joel Osment, all grown up, in more ways than one), has a travel phobia, so itâs up to Wallace to hunt down targets of derision for their mean-spirited online banter. 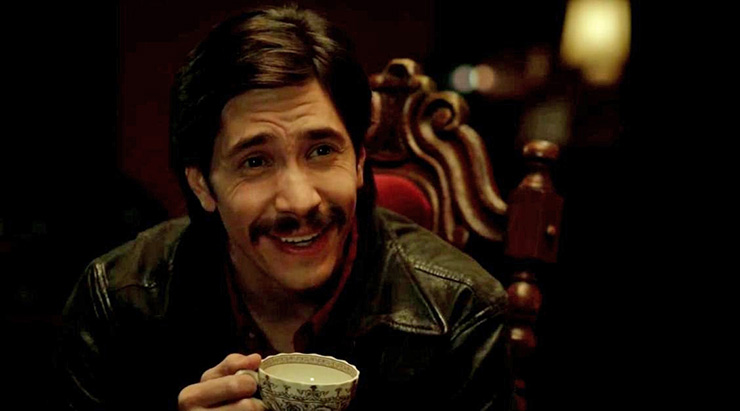 Without a performer with Longâs charisma, the first half hour or so of Tusk would have been a rough sit, filled as it is with Brytonâs unvarnished douchebaggery. Smith tries too hard to underline his characterâs boulder-sized ego and total lack of compassion, indulging in some broad swipes at Canadian quirks that fall flat about as often as they hit the bullâs eye. Wallace hits a road block when he shows up at the Manitoba home of his interview subject, and is unexpectedly left without content for his next Not See podcast â¦ until, that is, he spots an ad above a barâs bathroom urinal, neatly handwritten, in which a handi-capable man of a certain age is seeking a lodger at his expansive mansion in a backwoods area a few hoursâ drive away. 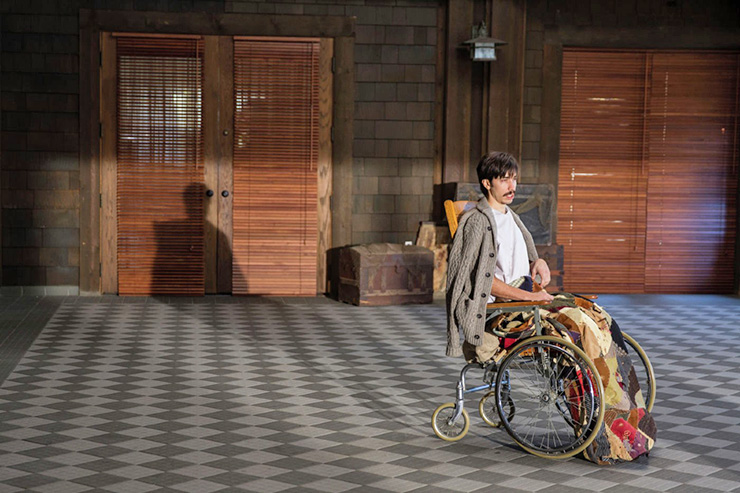 You can almost see the bulb light up above Wallaceâs head. Jackpot, bingo, the mother lode. When he drives through Pippy Hillâs forbidding gates, he â and viewers as their surrogate â feels as if he is entering another movie altogether. What follows is the filmâs centerpiece, an extended conversation between Wallace and motorized wheelchair-bound manor owner Howard Howe (the inimitable Michael Parks), who regales his audience of one with tales of seafaring adventures â¦ as well as some exotic-tasting tea. Mr. Howe effectively takes over the film, waxing nostalgic about his encounters with a grouchy Ernest Hemingway and the time he survived a shipwreck, thanks to, in his words, âGodâs most noble creature.â That would be a helpful walrus, with whom Howard forged a fierce bond. Wallace is convinced this discovery is going to make him an Internet household name, as he sips some more of that yummy tea. Sluurrrrp!

Smith is in no hurry to move things along, even dramatizing Howeâs anecdotes in brief black and white scenes, abiding by the chronologically correct Academy aspect ratio for the story that takes place before movie screens went wider. We are essentially watching two men sitting in an ornate living room, chatting away â My Dinner with Andre for movie nerds â but cinematographer James Laxtonâs widescreen compositions and Smithâs judicious, surprisingly disciplined editing keeps us engaged, right up to the moment Wallace becomes groggy and loses consciousness. 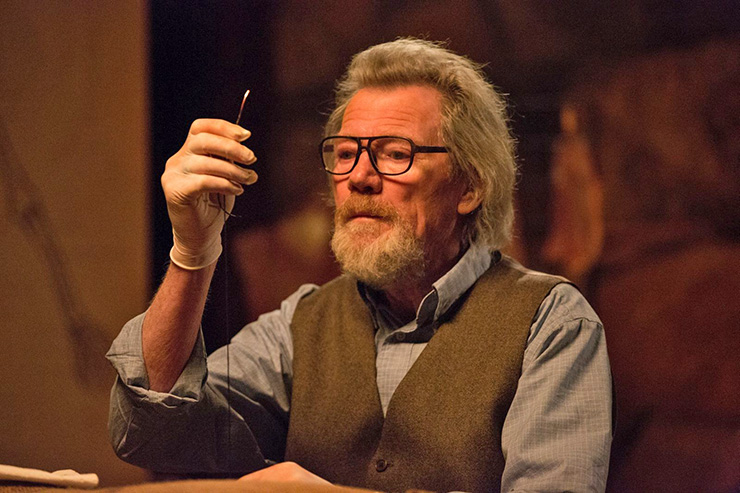 And, in meandering fashion, Tusk finally bares its fangs. Howard Howe, you see, has not been completely forthcoming to his guest about many things, least of all what he plans to do to him. What follows promises to serve up some unsettling Cronenbergian body-horror mayhem, updated for millennialsâ consumption, which explains why I found it more than a little puzzling that Smith opted to leave the bulk of the surgical carnage offscreen, the same quibble I had when Pedro AlmodÃ³var charted similar thematic waters in The Skin I Live In. As a result, Wallaceâs, um, physical alterations happen too abruptly, and the film arrives at its (satisfying) payoff too early.

By the point Teddy and Ally (Genesis Rodriguez), Wallaceâs neglected, long-suffering girlfriend, cross the border and seek the services of French Canadian sleuth Guy Lapointe (an extended celebrity cameo I wouldnât dare reveal) to locate the unwitting guinea pig, Tusk has smashed a brick wall pacing wise, rendering the filmâs structure lumpy and lopsided. Smithâs nonlinear narrative, peppered with flashbacks fleshing out Wallace and Allyâs floundering relationship, is capably sustained until this juncture, when it proceeds to run out of juice. The filmâs never loses its irreverent sense of humor, but I wish Smith had gone even further to rein in the self-indulgent impulses that tend to derail his films, something thatâs especially apparent when he lets Lapointe ramble. 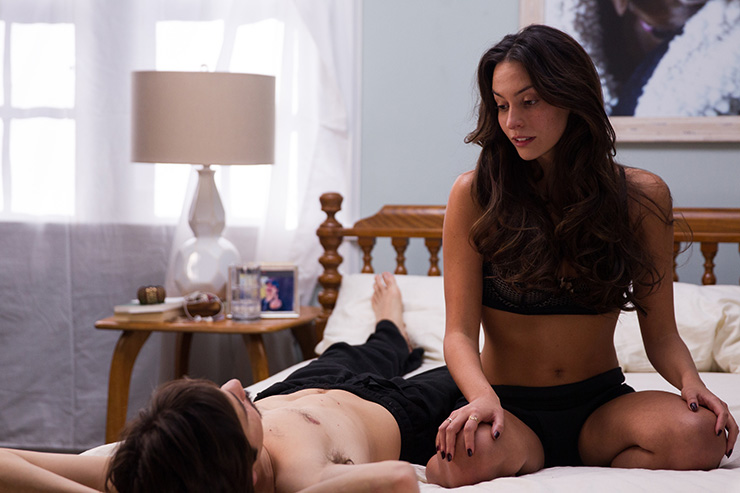 Unsurprisingly, Tusk, the first entry in Smithâs True North Trilogy, elicited wildly divergent reactions when it world premiered at the Toronto International Film Festival earlier this month, but a film as difficult to categorize as this one practically demands a polarizing reaction. Warts and all, this is a step in the right direction for Smith, whose customary rough-around-the-edges sloppiness has given way to more polished â and more audacious â genre splicing. Call this mad experiment a misshapen Frankenstein monster, one thatâs likely to turn off mainstream crowds but nevertheless merits the cult following Iâm hoping it earns.