Waltz with the Grim Reaper 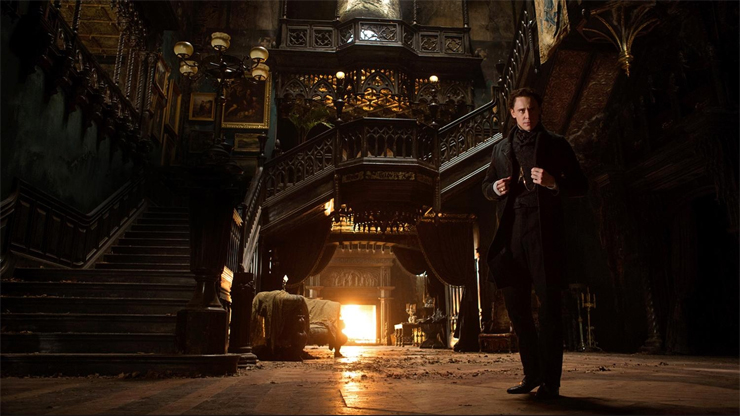 Crimson Peak, the new haunted house chiller from Guillermo del Toro, is made for romantics who like their costume dramas drenched in viscera, the work of an unabashed sentimentalist who believes love conquers all, even as he smears the screen with buckets of (gorgeously rendered) bloodletting. It made this reviewer's twisted heart sing.

This genre-hopping beaut is also a potboiler with shopworn twists and turns as old as Emily BrontÃ«'s windswept moors, as tried and true as Elizabeth Bennet's status quo-defying maneuvering. But just because Del Toro's fond of wearing his influences on his sleeve (hello, 1940s Alfred Hitchcock and 1960s British paranormal yarns) doesn't make his latest work any less captivating, even when you're a step or two ahead of its feisty, endearingly naÃ¯ve heroine. 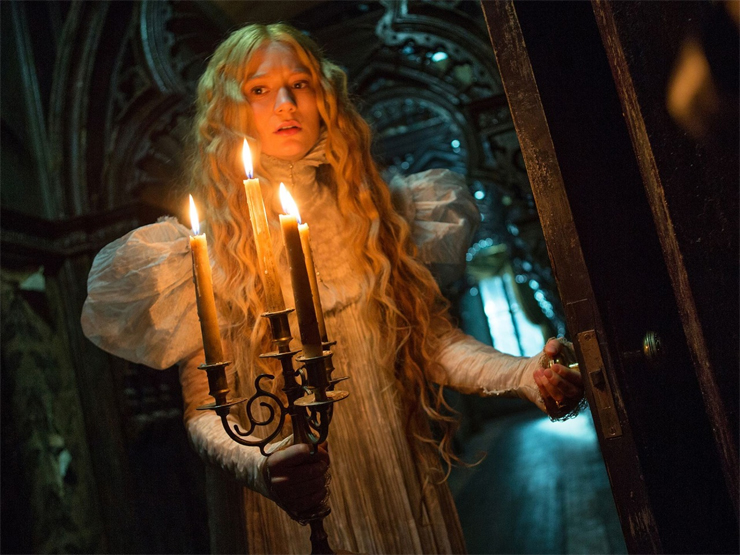 That would be aspiring author Edith Cushing (Mia Wasikowska). The movie opens with a closeup of her bloodied visage, petrified amidst the wintry landscape. âGhosts are real,â she says in a voiceover that, oddly enough, conjures up images of Winona Ryder in Beetlejuice. (Must be all those saturated reds and greens in cinematographer Dan Laustsen's palette. Seriously, if you're colorblind, prepare for a sea of grays. But I digress.

How did Edith wind up in this precarious spot? The movie elegantly fades into a childhood flashback, in which she's warned about Crimson Peak by her mother, shortly after she's been buried. What in Poe's name is Crimson Peak? The frightening CGI may look a tad too contemporary for the late 1800s (think Sam Raimi gone Masterpiece Theater), but make no mistake, in every other regard, Del Toro immerses us in the period (Buffalo, N.Y. initially, then rural northern England) with an enthralling sense of wonder. He's in no hurry to unleash mayhem, opting instead to follow Edith as she struggles to ensure her short story sees the light of day in a male-dominated field. (Not a ghost story, she corrects a prospective editor, but a story that happens to have ghosts in it, spelling out Del Toro's own intentions here.) 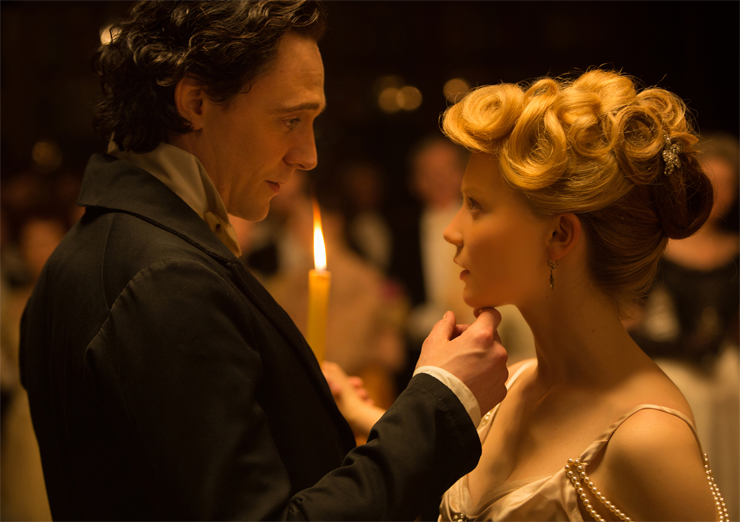 Society matrons sneer at the bookish nonconformist, pejoratively likening her to Jane Austen, who, as one of them reminds her, died a spinster. âI prefer Mary Shelley,â she counters. âShe died a widow.â Enter the dashing, enigmatic Thomas Sharpe (Tom Hiddleston, giving us the full Byron), a Brit who's in town to secure a grant to finish his invention: a machine that will mine the red clay under Allerdale Hall, the crumbling mansion he and his sister Lucille (Jessica Chastain), a gifted pianist, are trying to keep from sinking. With a title but little money, Thomas depends on local builder Carter Cushing (Jim Beaver), and his checkbook, to complete his contraption. Edith is smitten, her dad smells a rat, and Lucille glowers menacingly, especially when she has to endure seeing her brother take to the dance floor for a waltz that sweeps us off our feet, at least until the camera starts spinning a little too fast. Can you say the prom from Carrie?

Some sinister narrative turns later, Edith finds herself crossing the pond as Sharpe's bride, and we are finally introduced to Allerdale Hall, the real star of Crimson Peak. (Bram Stoker's Dracula production designer Thomas E. Sanders has truly outdone himself here.) Despite the large fireplaces, the gaping hole in the ceiling makes the temperature colder indoors than out in the middle of a harsh Cumbrian winter. But that's not the only thing that chills Edith to the bone. It seems this dysfunctional trio's not alone amid the cavernous hallways and rotting stairwells, and once again, nightly apparitions torment the in-over-her-head writer. There are few âbooâ scares here, just obsessively storyboarded interactions with ectoplasmic entities that make the hairs on the back of your neck point due north. 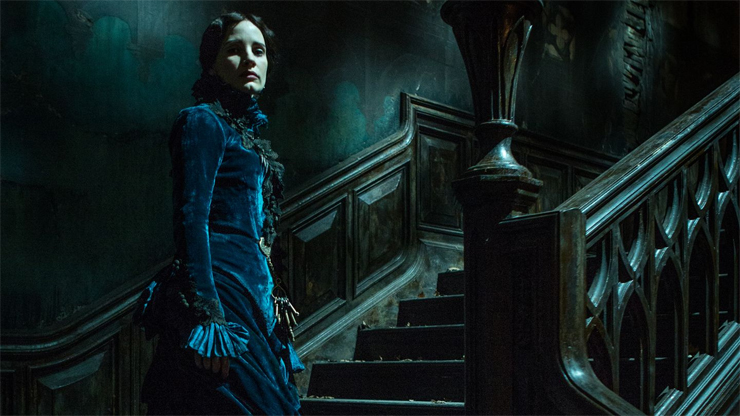 Gorehounds may be disappointed that the film's brilliantly orchestrated bursts of ultraviolence are fairly scarce, but that's arguably why they're so effective. What's disarming about Del Toro's approach is that the tea-and-crumpets trappings here are not mere window dressing. The Hellboy auteur is fully committed to the film's period, and that includes an old-fashioned sense of pacing. Dissolves and iris wipes seamlessly link one scene to the next, classical moves that feel just right in this context.

As Del Toro gradually turns the screws on his audience, he increases Lucille's screen time, and Chastain, who had seemingly remained a minor player in the film's Buffalo scenes, becomes a towering presence inside Allerdale Hall. She's the keeper of the keys, as well as some dastardly secrets. The character, and Chastain's reined-in performance, inevitably bring up comparisons to two of Hitchcock's most memorable villains: Mrs. Danvers, Rebecca's lethally loyal housemaid, and Mme. Sebastian, Notorious' Machiavellian matriarch. In a perfect world, the Zero Dark Thirty star would be generating serious year-end awards talk. 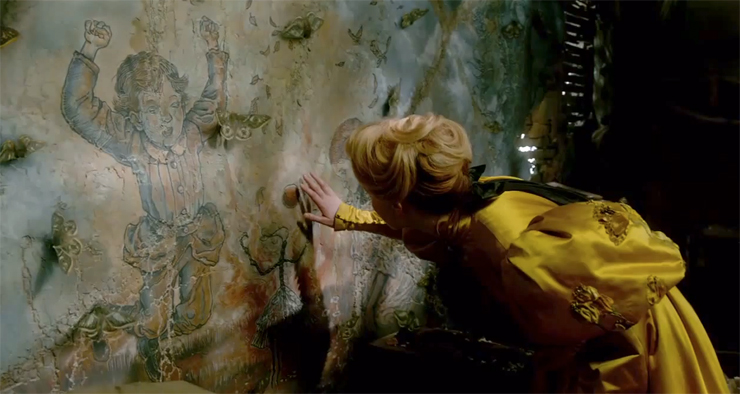 But we don't live in a perfect world, and Crimson Peak, for all its irresistible genre trappings and top-drawer production values, isn't quite a perfect movie. The emphasis on the cat-and-mouse game that develops between Edith and Lucille, as satisfying as it is, reduces the ambiguous bond between Thomas and his new bride to a cog in the plot's spinning wheels. Del Toro aims to build suspense around whether or not the inventor's feelings for Edith are true. (Are they as firm as Hiddleston's round buttocks?) But the two stars aren't allowed to form sparks the way, say, Wasikowska and Michael Fassbender's chemistry in Cory Fukunaga's brooding Jane Eyre burned off the screen. (That film, by the way, would make an ideal double feature with Crimson Peak.)

Del Toro's emphasis on visual calisthenics over narrative coherence is highly reminiscent of Tim Burton's work, a total kindred spirit. True, it sometimes feels as if the director and co-screenwriter Matthew Robbins are grasping to connect one setpiece to the next, which occasionally deprives Crimson Peak of narrative momentum, particularly in the film's second act. But to take major issue with the film's occasionally disjointed structure does not do justice to the treasures this darkly Byronic spellbinder holds. Sometimes, to go into the light, Del Toro conveys, you need to dive into the shadows, and this graceful waltz with death, and what lies just over the other side of that bridge, makes for one life-affirming time at the movies. This poetic rendezvous with restless spirits ends up lifting our own. 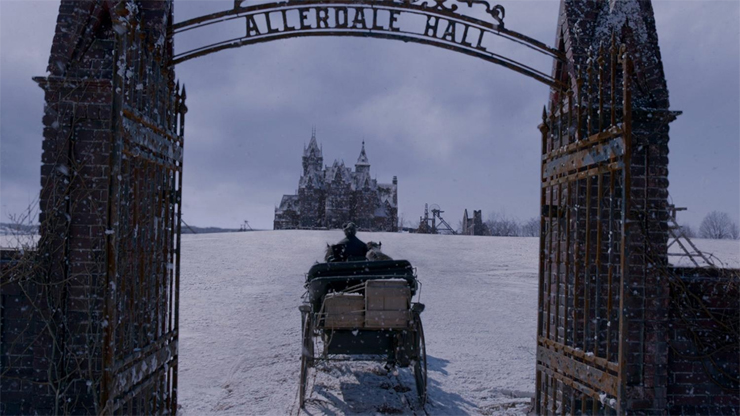