Brad Bird's âThe Incrediblesâ was Disney-Pixar's risk-taker. The exhilarating tale of a superhero household, which blasted into theaters on Thanksgiving weekend of 2004, wasn't just grade-A family fare. It was a top-tier action film, period. But more importantly, it was a rebuke to the notion that bad guys make exceptions for the most innocent victims, because after all, targeting women and children in a movie like this would be too much. Besides, it would be unthinkable anyone helming such a production would put children in harm's way like, say, place them in a plane being zeroed in by missiles.

But there we all were, gasping in unison as Elastigirl (the voice of Holly Hunter), who can stretch her body not unlike Mister Fantastic from the Fantastic Four, grabbed her children a nanosecond before the aircraft they were on went kablooey. The safety net we've long come to associate with the majority of Disney's family-friendly oeuvre was abruptly yanked from under moviegoers' feet, as Bird let the characters free fall for what felt like an eternity before a clever solution put an end to their life-or-death situation. Sheer terror gave way to unfettered glee for this critic. If you love this movie as much as I do, I'll give you a moment to bask in that feeling. Glorious, isn't it?

That brilliantly edited sequence made you feel like Bird had gotten away with something he shouldn't have. I could only imagine what went through Disney executives' minds later in the film, as Elastigirl's son Dash, a boy with the gift of hyperspeed, is seen narrowly dodging some very real bullets aimed at him. Bird (âThe Iron Giant,â âRatatouilleâ) didn't just take viewers out of their comfort zone. He deconstructed this romantic (and misplaced) notion of celluloid baddies, turning it into one of the film's central themes. This a significant reason why, even though some of the computer animation may not have aged as well as it should have, the film remains a vital, enduring piece of pop culture.

Which makes it ironic that it's taken nearly 14 years for the Pixar title that seemed most likely to receive the sequel treatment to actually get one. This, after the studio has continued to churn out a string of follow-ups that hardly felt necessary from a creative point of view, even as they raked in the big bucks. (âFinding Dory,â anyone? I'm having trouble remembering most of it, aside from Baby Dory and the grumpy octopus.)

âIncredibles 2,â which kicks the 2018 summer season into high gear this weekend, takes advantage of the most recent advances in computer animation. The technology has evolved in leaps and bounds as vast as Elastigirl's stretching capabilities. The backgrounds look sleeker, the character movements more life-like, all while retaining Bird's defiantly cartoonish approach to the medium. The narrative threads this time around revolve around Gender and Parenting, delineated in broad, neatly etched strokes that match the characters' intricate body language. Bird wisely shifts the focus from Bob Parr, aka Mr. Incredible (Craig T. Nelson), to his wife Helen, aka, you guessed it, Elastigirl, as she becomes the film's main problem-solver (and breadwinner). Also, Bird unleashes some expertly staged action sequences that keep the popcorn flowing, set to Michael Giacchino's swingin' jazzy music score.

So why does it all feel like a sizable step backwards? In a word, risk, or in this case, a lack thereof. Bird, a smart and sophisticated filmmaker, is back as screenwriter and director. Nelson and Hunter once again bring their vocal talents, as does Sarah Vowell as the couple's disappearing/force field wielding daughter Violet and Samuel L. Jackson as fellow super Frozone. (Huck Milner takes over from Spencer Fox, as the precocious, lightning-fast Dash.) But where is the subversive streak that made the original film so thrilling? Alas, the edges have been sanded off for mass consumption.

Moreover, Bird has opted to pick things up right where the first âIncrediblesâ left off, as the family, rounded out by scene-stealing one-year-old Jack-Jack (Eli Fucile), risks arrest in a world where superheroes remain illegal, in order to save their town from the Underminer (Pixar mainstay John Ratzenberger). But the sequence is a bit of a dud, and ends up falling flatter than a pancake. Bird is a gifted storyteller, but he's also a bit rusty in this long-awaited return to his beloved super-powered clan. Retaining the same mid-1960s setting would have made more sense if âIncredibles 2â were coming out in 2008 instead of 2018, but Bird's insistence in further exploring the âMad Menâ era enhances a preserved-in-amber vibe that dilutes the urgency that propelled the first film.

Even the main narrative outline, which has the titular characters joining forces with brother-and-sister entrepreneurs Winston (Bob Odenkirk) and Evelyn Deavor (Catherine Keener) to help make superheroes lawful again, feels like secondhand remnants. The business-minded siblings' strategy: make the flexible Elastigirl, not her more destructive spouse, the face of their marketing strategy, as Winston's slick wheeling and dealing and Evelyn's tech savvy aim to make a case to allow âsupersâ to come out of hiding once and for all.

It takes a while, too long, for âIncredibles 2â to pick up steam, but when Bird finally places Helen/Elastigirl in a position where she can actually save lives, the film comes roaring to life, albeit in fits and starts. Helen finds herself one step behind Screenslaver (Bill Wise), a masked sociopath with the ability to hypnotize viewers through TV cameras, who continues to raise the stakes and the magnitude of the obstacles he puts in our heroine's way. 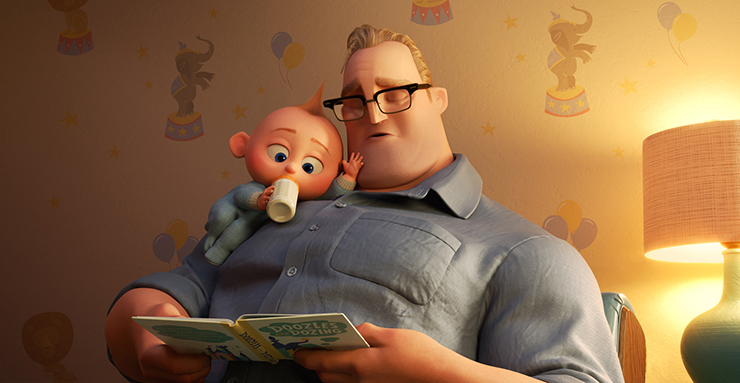 Meanwhile, Bird attempts to mine laughs out of Bob's emasculated ego and period-accurate misogyny, as he wraps his head around taking over âmomâ duties. But the writing here feels lazy and obvious. There's the germ of a good idea in the role reversal at play here, but unfortunately it opens the door for Bird to indulge in scenarios that feel right out of a lousy sitcom. (Picture it: Meet the Sub-Parrs.) Violet's story arc bears the brunt of this cutesy tactic, as Bob tries to play matchmaker for her, with disastrous results. (Even an appearance from fab fashion designer Edna Mode, voiced once again by Bird himself, feels half-hearted.)

But the groan-inducing moments also lead to a nuanced heart-to-heart between father and daughter. As for Helen, she and Evelyn bond over their superhero rights campaign, and even share differing outlooks on gender inequality in a scene that ensures âIncredibles 2â passes the Bechdel test. Bird also mines Jack-Jack's sight gag possibilities. In a scene that wouldn't feel out of place in a âTom and Jerryâ cartoon, the curious toddler tries out his newfound superpowers on a hungry raccoon.

What's frustrating is that there's an overarching sense of complacency that courses through âIncredibles 2.â Bird appears to be at peace with recycling some of the story beats from the first film, only considerably less menacing. There are still flashes of the sharp social satire that appears to posit a Randian defense of superheroes without feeling the least bit preachy, a pitfall that his 2015 live-action misfire âTomorrowlandâ was unable to avoid. âIncredibles 2â is a step up from that lackluster adventure, but it plays more like an above-average Pixar sequel than a worthy successor to one of the best superhero movies of all time. It's decent enough, but remains earthbound when it should have aimed for the stratosphere. The last thing I wanted from an âIncrediblesâ sequel is to play it safe.

âIncredibles 2â is out now in wide release, both in 2D and 3D engagements. Pixar Features' more understated approach to 3D rarely merits the loss of brightness that comes from seeing it that way, so search for the biggest 2D screen showing it, and try not to think too hard about the movie that could have been.