The word "fail" is not in their vocabulary. A word used sparingly? That would be "stop." And "never" usually goes next to âgive upâ when they're talking about their goals, which are as concrete as âstarting a farm with my family in Arkansas,â or as confounding and tough to pin down as "who am I?"

It's not difficult to see why Fern, a resourceful and thick-skinned nomad reeling in the aftermath of the Great Recession, and Jacob Yi, an ambitious patriarch who uproots his family to the heartland during the Reagan years, have struck a chord with virtual festival audiences, critics and industry groups throughout 2020. Their stories brought a ray of hope to viewers who were often forced indoors and subjected to a news cycle that would dishearten the staunchest optimist.

It will be interesting to see how general audiences react to the films that revolve around these characters now that they've opened in theaters and are also available to stream for those who are choosing to wait longer before heading to the multiplex.

Me? I was impressed by the performances of Frances McDormand and Steven Yeun as Fern and Jacob, respectively, but not quite as bowled over by their films. They're two good movies I wish I liked better. Why? Allow me to explain.

âNomadlandâ: The Amazon warehouse is every bit as drab and dispiriting as the picture you probably had in your mind when placing your orders. The early scenes in ChloÃ© Zhao's third feature present Fern's seasonal grind with nonjudgmental clarity. It's the early 2010s, and Fern has lost her husband and her job when the manufacturing plant in Nevada where she worked closed down. The closure essentially wiped the company town of Empire off the map. Displacement emerges as the overriding state of mind even before the protagonist decides to hit the road.

Those familiar with Zhao's brand of earthy lyricism will probably be perplexed by its initial absence here, but be patient. Once Fern's seasonal job ends, however, it's clear there is nothing holding her in Empire, so she drives off in the white van she bought when she sold her belongings. The road opens up, and so does âNomadland,â which reteams writer-director Zhao with cinematographer Joshua James Richards. They're enamored with the vast spaces that greet Fern as she joins fellow travelers on society's margins, and their kaleidoscopic overview makes for an engaging watch. They've crafted slice-of-life realism with the glossy sheen of a coffee table book. 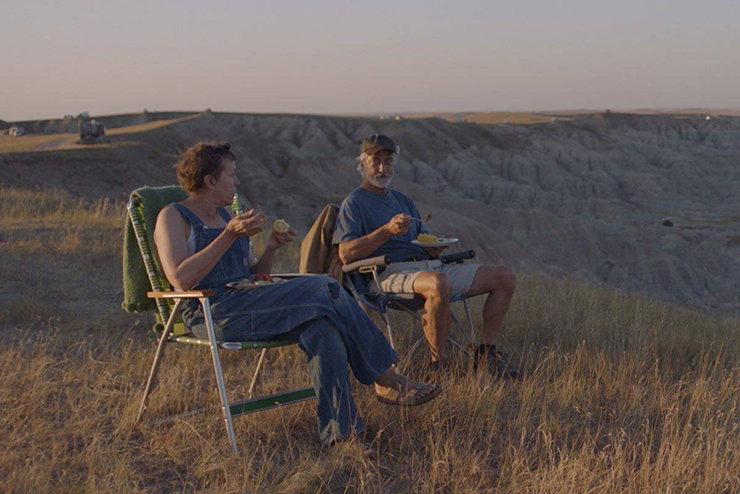 The formal dichotomy is not off-putting, at least not at first. Zhao, who adapted Jessica Bruder's 2017 nonfiction book, takes a cue from the source material and mixes professional actors with nonprofessionals essentially playing themselves. The same strategy paid off handsomely for the filmmaker in her sophomore effort, the devastating rodeo rider portrait âThe Rider,â and here it enhances the verisimilitude in Fern's journey. âNomadlandâ thrives in Fern's conversations with fellow nomads, such as Swankie, a camper of a certain age who admonishes Fern for her lack of preparation, then ropes her in to do tasks. Swankie, not a pro, holds her own against McDormand, a pretty tall order, and even steals the occasional scene. A more conventional friendship develops with David (the esteemed David Strathairn, aging like fine wine). It's clear he's interested in her, and it's equally clear she has zero interest in a relationship.

Zhao alternates between the golden-hour beauty of the Arizona desert, and the more mundane trappings of a restaurant and RV camp. McDormand keeps us riveted as she flits from one work gig to another, hesitant to stay too long anywhere. The filmmaker does an admirable job of conveying the shapelessness of Fern's trajectory while maintaining a steady pace. 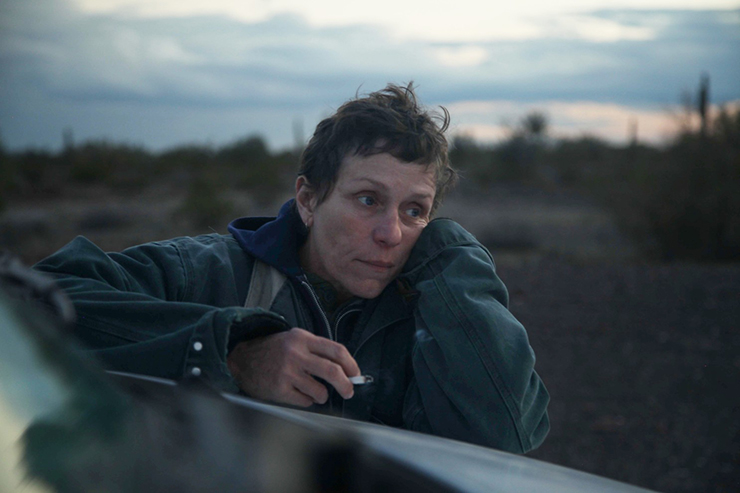 But as âNomadlandâ throws one wrench after another in Fern's path, the gorgeous vistas begin to keep viewers at arm's length, which is the opposite effect they had in âThe Rider,â where they echoed the titular character's broken dreams. There's something a tad too tasteful in Zhao's mise en scene, and then it becomes apparent what is missing: the grime and sweat that would make this story visceral. There's a reticence on display, a reluctance to get one's boots muddy. A lush earworm of a score by Italian composer Ludovico Einaudi goes hand in hand with the director's visual palette, but she ends up using it as a blunt instrument. In this case, less would have been so much more.

And just when you think âNomadlandâ will retain its open-road synergy, it starts becoming less about the community Fern discovers than about coming to terms with her inner turmoil. You feel the film's focus growing more and more narrow, until it's whittled down to a study in grief management. Zhao is aiming for closure while keeping the resolution somewhat elliptical, but she mostly succeeds in delivering a tidy travelogue that too often plays like a guided tour. She has made a perceptive portrait of resilience and personal growth that should have asked more from its audience.

âMinariâ: The rectangular trailer sits in the middle of a five-acre plot. To aspiring farmer Jacob Yi (Yeun), it's his very own Garden of Eden, filled with incalculable possibilities and the promise of a more prosperous tomorrow. His wife Monica (Yeri Han), on the other hand, will need a little more persuading about its prospects. The Korean couple have moved their daughter Anne (Noel Kate Cho) and son David (Alan S. Kim) from California to rural Arkansas in the mid-1980s. Their story, a semi-autobiographical chronicle from writer-director Lee Isaac Chung, is bolstered by the specificity of a memoir and hindered by âAmerindie 101â plotting that can charitably be called basic and familiar.

âMinariâ navigates the immigrant family's fish-out-of-water learning curve with sensitivity and tenderness. Monica worries that David's heart murmur will be affected by the change in setting. And David? Gosh darn it, he still wets the bed. Meanwhile, his dad is setting down roots, literally, determined to do the back-breaking work himself, all while he and Monica work at the local hatchery sexing chicks, a task as menial and soul-crushing as it sounds. (He's faster at it than she is.) But the endgame for Jacob is to leave all that behind once he grows Korean crops he can sell to vendors in Dallas.

No one said farm life would be easy, something Jacob, as stubborn as a mule, learns the hard way. He hires some help, in the form of Paul (Will Patton): hardworking, God-fearing and disarmingly goofy. Like the movie he's in, he's rather easy to like. Meanwhile, holding down the job at the hatchery prompts Monica, after some negotiation with her husband, to convince him to bring in her mother, Soon-ja (Yuh-jung Youn), from South Korea to help watch the kids. The grandmother's arrival helps give âMinariâ much-needed flavor, and even though Chung's depiction of the generational and cultural divide between the older resident from the motherland and the increasingly assimilated household is hardly groundbreaking, it provides an intriguing dimension to the characters' identity crisis. The film's familial dynamics recall in parts Ang Lee's âFather Knows Bestâ trilogy, with a dash of John Ford at his most intimate.

But those filmmakers left a more personal imprint on their material, whereas âMinari,â despite its curiosity for the way Asian Americans view cultural artifacts from the West (Mountain Dew, anyone?), is hemmed in by a rather generic rolling-through-the-punches narrative. You see the beats coming a mile away. Its lack of a political edge, despite an acknowledgment of the Reagonomics-driven mindset of the period, would be less of an issue if the rest of the film weren't all soft edges. (Is Jacob's red baseball cap a tip of the hat to pre-MAGA insularism? Chung doesn't say.) The dialogue in the scenes where Jacob and Monica argue, in particular, sound more like the director's thoughts than something the characters might actually say.

And yet you still want to know what happens to the Yis. You realize that you've started caring for them and are silently rooting for them to make their new chapter in America work. It helps that Chung has assembled a strong cast that you buy as a family. (It's also good to see Patton, an ubiquitous figure in studio productions of the eighties and nineties, shining in smaller films.) The movie is named after a plant that Soon-ja encourages her grandchildren to grow by a nearby creek, since it thrives in a variety of climates. The metaphor sounds heavy-handed, but embedded in the struggles of this family, it leads to a quiet, agreeably verdant payoff that helps sell âMinari'sâ warm positivity. Its simplicity is becoming.

ChloÃ© Zhao's "Nomadland" is now playing in theaters across South Florida, including the Coral Gables Art Cinema, Silverspot Cinema in downtown Miami and Tower Theater in Little Havana, as well as IMAX engagements at AMC Aventura and AMC Sunset Place. It also also available to stream on Hulu. Lee Isaac Chung's "Minari" is also playing at the Silverspot and the Tower, as well as the CMX Brickell City Centre, The Landmark at Merrick Park in Coral Gables, Cinema Paradiso Hollywood and Savor Cinema in Fort Lauderdale. Its distributor, A24, has also made it available to stream on its Screening Room platform.