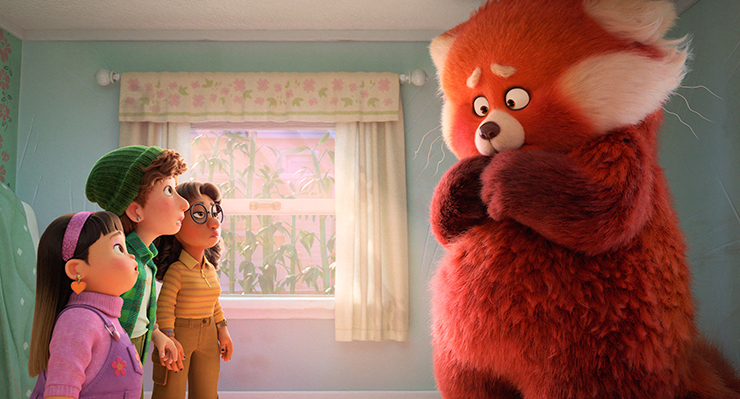 The voices of Hyein Park, Ava Morse, Maitreyi Ramakrishnan and Rosalie Chiang as Abby, Miriam, Priya and Meilin Lee in a scene from "Turning Red." (Photo courtesy of Disney/Pixar)

By now we know the drill. An animated feature aimed at family audiences will offer a variation on the hero's journey, putting obstacles in the protagonist's way and triggering estrangements that will be resolved in time for the rousing finale. Your mood is brightened, even when there's a nagging sense you've seen this story before. Many, many times before.

âTurning Red,â the latest feature from the talented folks at Pixar, appears to follow this route, sending its pubescent main character on a collision course with her loving but rigid mother, as well as her own body, when she finds herself transformed into a mythical, plus-sized red panda. Does it hew closely to the shopworn character arc of the Pixar formula? It does. The familiar signposts are all there, the tried-and-true narrative structure firmly in place. 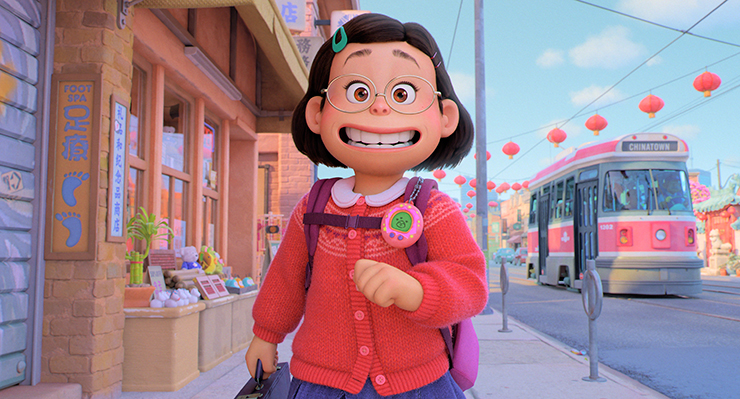 And yet the film, which marks the feature debut of director Domee Shi (the Oscar-winning short âBaoâ), still feels like a departure for the Emeryville, California studios, in a most exhilarating way. It's a zesty, jovial portrait of puberty that revels in the rich details of its setting, and its multigenerational characters' mood swings, without diluting or soft-pedaling the central conflict: a battle for the direction a 13-year-old Chinese Canadian girl's life when she reaches a pivotal juncture.

âTurning Redâ makes no bones about what that major crossroads is: the initial twinges of sexual desire. Meilin Lee (the voice of Rosalie Chiang) is all spunky confidence when she gives viewers a tour of a typical day in her life. At her Toronto middle school, the eighth-grader hangs out with her besties Miriam (Ava Morse), Priya (Maitreyi Ramakrishnan) and Abby (Hyein Park). The year is 2002, and the quartet's current obsession is 4*Town. Uhh, what's 4*Town, you ask? Only the awesomest boy band in the entire universe. The girls' swoons are infectious, even when their attention shifts to the kinda cute, kinda sketchy sales clerk at the Daily Mart. 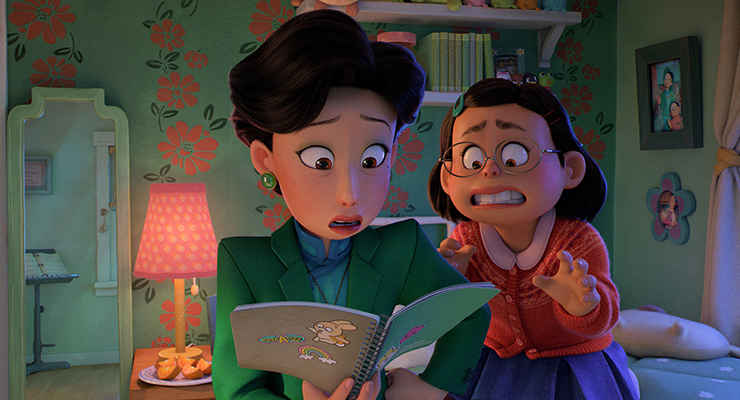 The voices of Sandra Oh and Rosalie Chiang as Ming and Meilin Lee in a scene from "Turning Red." (Photo courtesy of Disney/Pixar)

But not long after class is dismissed, Meilin makes a beeline for her family's temple, where she helps her mother Ming (Sandra Oh) run things and even assist with presentations for visitors. It doesn't take long to see two things: Meilin is not the assured go-getter that she would have us believe, and what she wants from life is no longer in alignment with the path Ming has mapped out for her.

Shi, working on a script credited to her and Julia Cho, underscores that generational chasm by having Meilin channel her burgeoning lust into a sketchbook that, sadly, leads to a moment of cringe-inducing humiliation involving a parental overreaction and the aforementioned convenience store employee.

The stage is set for a rude awakening, literally, when Meilin rolls out of bed only to find she is now a fluffy, carrot-furred forest dweller. The moment of discovery carries heavy âTeen Wolfâ vibes, with a dash of âBig,â the 1988 Tom Hanks movie that finds a boy aging into adulthood overnight. But these comparisons are only fur deep. The transformation is clearly intended to be a metaphor for menstruation, yielding the very first Pixar scenes featuring tampons. And in true Pixar form, the results are decidedly wholesome without shying away from the subject at hand. Shi aims to place viewers in the teen's headspace, and we feel her torment when she realizes the way she looks is something she can no longer control. 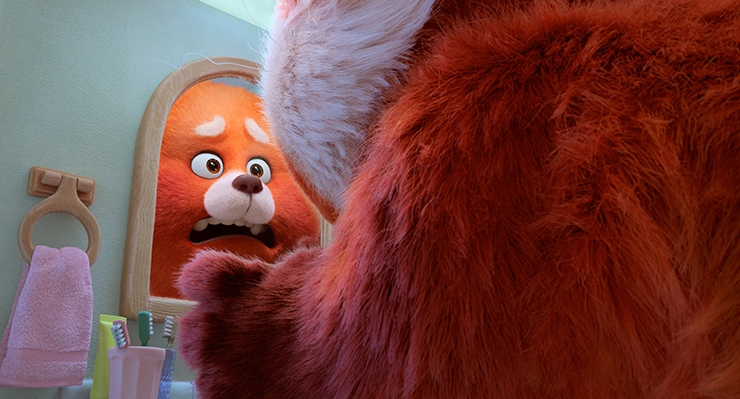 Or maybe she can. We also share Meilin's elation when she realizes she is able to rein in or poof away, the beast within. Beyond hormonal changes, âTurning Redâ is a parable about control: how a micromanaging parent wields it, and how a girl whose identity crisis has taken a fuzzy and unwieldy form can wrest it back and manage it on her own terms. Meilin's efforts lead to cheerfully destructive mayhem, some assistance from feisty older relatives, and a quest for concert tickets that takes an entrepreneurial turn that's strangely reminiscent of Kelly Reichardt's âFirst Cow.â Appropriately enough, one of that film's stars, Orion Lee, voices Jin, Meilin's soft-spoken father with a golden touch in the kitchen. (The film's food porn, it must be said, is perfection.)

âTurning Redâ goes through the expected paces, but it feels fresh and vibrant, thanks to sharp dialogue, crack comic timing, and a brisk pace that never lags. Then there's the animation, with its saturated colors and meticulous attention to detail and body language. (Watch how each character's wardrobe reflects their personality.) Meilin's wide, expressive mouth would not feel out of a place in a Studio Ghibli production, nor would the way she finds herself at uncomfortable midway points between humanity and creaturedom. Shi's homage to monster movies comes as no surprise; what is startling is the surreal imagery that injects boy-band fandom and East Asian fantasy tropes into the movie's tasty stew of influences. Your spirit animal will roar with pleasure.

It could have easily spiraled out of control, but the director keeps a tight grip on the disparate elements holding this rollicking ride together. They mesh far more effectively than one would think, and at 100 minutes long, the film flies by, seamlessly alternating between broad laughs and heart-tugging moments that give your spirits a warm squeeze. East meets West, thematically and formally, until there's little doubt the coming-of-age tale being told mirrors Pixar's own growth. (Sadly, it's not a story audiences will be able to see on the big screen. Like âSoulâ in 2020 and âLucaâ in 2021, âTurning Redâ will have to settle for delighting subscribers to Disney Plus.) 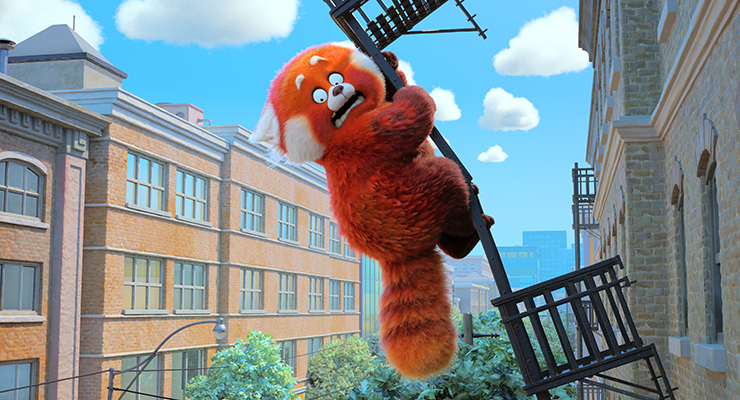 The film is a bold step forward for Pixar, not just in how it tackles more mature subject matter, or how it champions underrepresented communities in a way that puts creativity front and center, but also in the degree with which it hones the tactility of its computer-generated format to resemble a classic cartoon, with its elastic shapes and spastic rhythms. As odes to the healing power of sisterhood and complicated family ties go, âTurning Redâ uses its own, culturally specific brand of nutty playfulness to attain a universal appeal. Its target audience is everyone.

âTurning Redâ is now streaming on Disney Plus at no additional charge. Earlier this year, Disney executives opted to nix a theatrical rollout for the film with the exception of a one-week engagement at the El Capitan Theatre in Hollywood.