Anything Goes, But Not Enough Works

Tap dancing makes just about any musical better. Unfortunately for the audience, the tap number in Anything Goes doesnât happen until the Act 1 finale.Â Thatâs the main problem with the national tour of Anything Goes, now at the Broward Center for the Performing Arts. 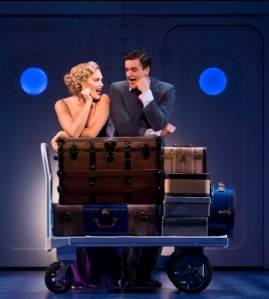 Emma Stratton and Brian Krinsky in ANYTHING GOES.

A musical full of Cole Porter songs, especially the farcical kind from the 1930s in which madcap antics take place on an ocean liner with dizzy dames, disguises, and romantic scheming should feel as light and fizzy as good champagne.Â

Instead, Anything Goes feels so heavy and bloated itâs surprising the ship doesnât sink mid-crossing.Â Donât blame the leading lady.Â

Emma Stratton is terrific as Reno Sweeney, the evangelist turned nightclub singer who employs a unique combination of religion and sex in her onboard act.Â  Stratton has a full, throaty voice, a glamorous charm, and does she ever rock the palazzo pants during the big title tap number.Â  While Stratton elevates every scene sheâs in, it often feels like sheâs in a different, better musical than everyone else.Â 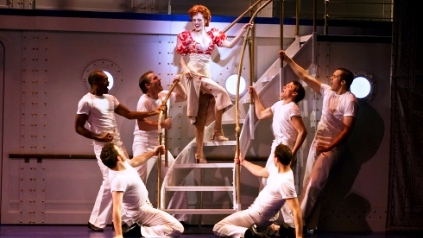 Mychal Phillips as Erma and Ensemble in ANYTHING GOES.

The same could be said for Mychal Phillips, who plays Erma, a character so minimal to the plot the show could easily happen without her.Â  But Phillips, who plays a gangsterâs moll who never met a sailor she didnât like, is so much fun to watch that she becomes one of the highlights of the show.Â  Phillips embodies the fizzy charm that should pervade the show.Â

Of course, one of the main selling points to any production of Anything Goes is the litany of songs by the great Cole Porter â I Get a Kick Out of You, Easy To Love, Friendship, Youâre the Top,Itâs De-lovely â Anything Goes classics that are performed beautifully by this cast.Â Â

The costumes, by Martin Pakledinaz, are the essence of 1930s Hollywood glamour â bias cut gowns in sumptuous fabrics that move gracefully around a womanâs body as if a light breeze is always in the air. Â

The choreography, which won director Kathleen Marshall a Tony Award for the 2011 revival, is beautiful, especially the title number and the gorgeous ballroom dance scene to Itâs De-lovely, but in most cases the choreographed numbers go on too long, which makes the show drag.Â  That, combined with the overall slow pace, hampers the mood.Â

The result is an oddly restrained musical that rarely lets loose and embraces its own romantic exuberance.Â

Anything Goes runs for two weeks through May 17 at Broward Center for the Performing Arts in Fort Lauderdale.Â  For tickets and more information, visit BrowardCenter.org.