Bigger Than Life, BIBI Is the Ambassador of Fun and Excitement 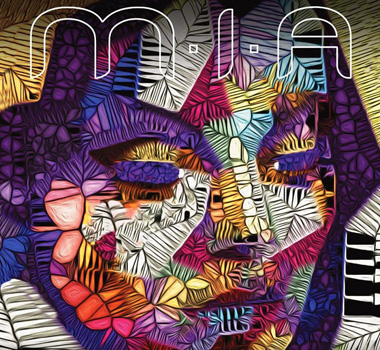 Brigitte âBibiâ Andrade is a legend in Miami Beach. If you know her, you know of her comic book series, âThe Adventures of Bibi and Friends.â Itâs the story of a fictional character, BIBI, who keeps, as the author describes it, âan intriguing social agenda.â The Adventures of Bibi & Friends, 100: The Miami Beach Centennial Collectorâs Edition Comic Book 1915-2015 featured nearly 500 illustrations and stories about pioneers and the renaissance of South Beach was indeed a collectorâs edition.

miamiartzine.com talked to Andrade who created the globetrotting character and official ambassador of fun and excitement, much like Bibi herself. Sheâs also an accomplished artist and will be part of a spectacular Art Collective in Los Angeles that begins June 18 through June 25, as part of Expo Metro Los Angeles, a Grand Tour of America that will feature whatâs been billed as the Worldâs Largest Collective Artwork.

miamiartzine.comÂ also spoke to Andrade about her time in Miami Beach, how she got here and her participation in this monumental collective.

miamiartzine.com: Tell me about this Worldâs Largest Collective Artwork in Los Angeles.

Brigitte âBibiâ Andrade: I have 10 spots exhibiting 7 art works. And itâs 460 artists from around the world who are exhibiting together 856 individual artworks on 1,080 spots. The artwork will be presented for one week on a spectacular 60-by-25 feet vinyl billboard and be seen by approximately one million people in Downtown LA. And, the Collective Artwork will be auctioned as a single one-of-one NFT on the first day of the expo. We really want to bring the Collective to Miami for Art Basel. Stay tuned. It could happen. 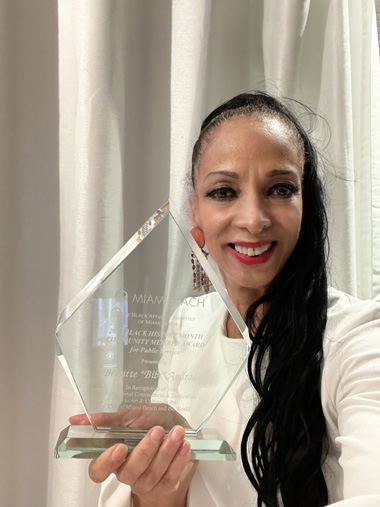 Artist Brigitte "Bibi" Andrade with her Black History Month Recognition Award from the City of Miami Beach and the Black Affairs Advisory Committee.

maz: Where are you from originally and how long have you lived in Miami Beach?

BA: I grew up in New Jersey and have lived in Miami Beach for the past 29 years.

maz: What do you consider your artistic medium?

BA: I mostly work with Digital Art and photography transferring my creations to different mediums such as canvas, acrylic, metal, lenticular 3D and paper. When working with canvas, I add additional elements by hand, but I found the 3D lenticular to be the most fascinating, but also a lot of work.

maz: When did you first realize you wanted to be an artist?

BA: I remember as a teenager my older brother could paint and was a decent artist but never embraced his skills. I then found out that my paternal grandfather could also paint, and I thought I would be good if I just started somewhere. I began my career working with artists as a rep behind the scenes and never sought the spotlight. My first art event was for a photographer I represented by the name of David Stetson and within a half-hour of opening the show, we sold two pieces of art to Malcolm Forbes. Thatâs when the lightbulb went off in my head. It was when I arrived in Miami Beach and created âThe Adventures of Bibi & Friendsâ comic book series, that my creativity began to expand in ways I never saw coming.

BA: My personal art and the comics are joyful, thoughtful, and fun. I want people to smile and laugh. I donât create pieces that feel angry. I hope I never do.

maz: What inspires your work?

BA: I find sparks of magic in absolutely everything from sunrises to broken glass on the floor. I love color and nature. 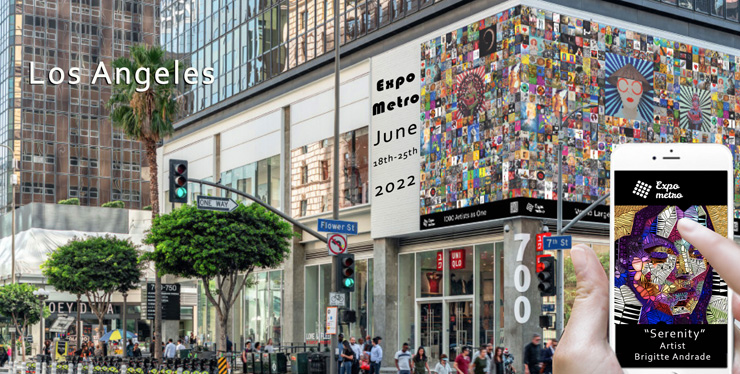 From June 18 through June 25 as part of Expo Metro Los Angeles, Andrade joins 460 artists from around the world on a Collective Artwork that will be seen by approximately one million people in downtown L.A.

maz: Do you feel like there have been influences in your life?

BA: My mother Dorothy has always been the person I looked to because she never gives up. When down, she just keeps going like the Energizer bunny. My other influences â and this may sound strangeÂ â are all my friends and artist I represented who passed away especially during the AIDS epidemic in 1980s. I lost so many creative people and I feel like I am honoring them every day by keeping the creativity moving along.

BA: Miami Beach was where I was able to truly tap into my personal creativity as an artist. When Art Basel arrived in 2002, I had three years of comic books under my belt and hung some pieces in the GMCVB booth for two years. It was then that I decided, after looking at some of that art selling for millionsÂ â which to me personally was not appealing â that I could do this and sell art. Of course, I am sure many artists have said the same thing to themselves, LOL! 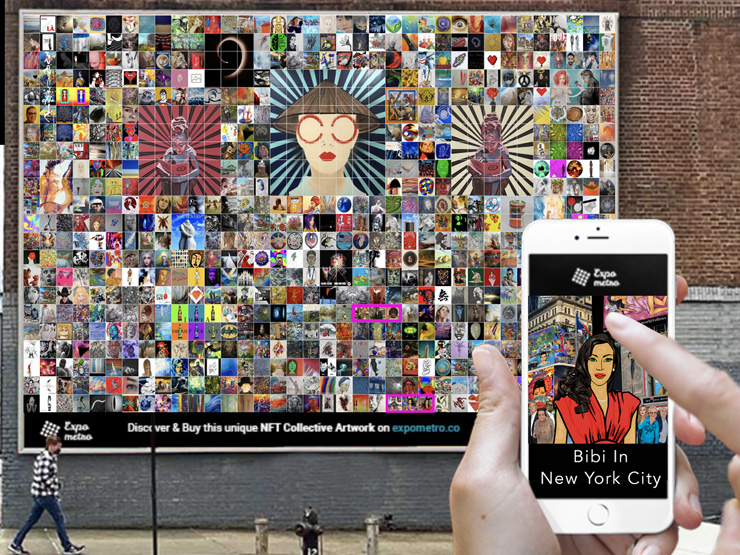 maz: So in addition to the Los Angeles project, it seems like youâve had some exciting adventures yourself both in 2021 and in 2022.

BA:Â  Yes, in November I received a proclamation proclaiming November 21, 2021, as Bibi & Friends Comic Book History Day and on February 18, 2022, I received the first Black History Month Recognition Award from the City of Miami Beach and the Black Affairs Advisory Committee.

I was nominated and selected to receive an award by Legacy Magazine as one of Miamiâs Most Powerful and Influential Black Business Leaders of 2022. It appeared in the Power issue, which was published on April 17, 2022, as an insert in the Miami Herald, and in May there was a gala awards ceremony. 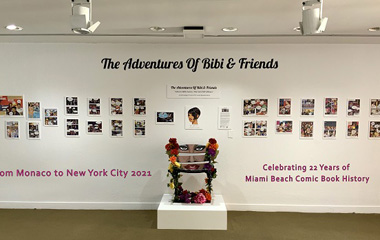 maz: You also had another honor?

BA: Yes . It was the Art of Black 7th Annual Art of Black Cover Competition, sponsored by the GMCVB and it was purely an unexpected joy. I entered the competition at the last moment after getting an email. I was in the middle of finishing six art works for my NYC Collective Art Show which was exhibiting in December of 2021, but all seven artworks had to completed and submitted on the same day and I thought âWhy notâ?

So, I created a new piece for the competition in two days and put it out to the universe with no expectations. You can imagine my surprise when the phone rang that I was a finalist and then the call that I won! I got the cover which was an insert in the Miami Herald and Sun Sentinel the Sunday of Art Basel and Art Week opening and a nice check of which we had the presentation at the Historic Lyric Theater in Overtown. 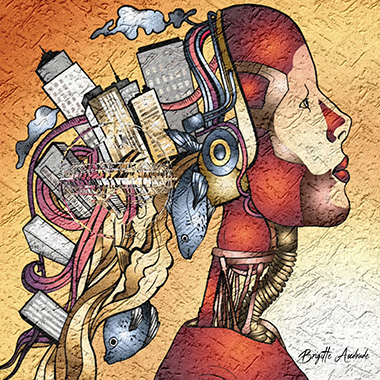 maz: And you had a show at the iconic HistoryMiami Museum and the Collective Art Show in New York City?

BA: The show at HistoryMiami Museum celebrated 22 years of âThe Adventures of Bibi & Friendsâ comic books. The exhibit was a snapshot of history showcasing a collection of various pages from The Adventures of Bibi & Friends comic books and the Miami Marine Stadium Bibi Chair. Many of the places featured are now part of an incredible history in Miami Beach that no longer exists, along with some of the friends that we pay homage to. I am honored that this was my second showing at HistoryMiami Museum. In 2018, I had some collaborative artwork pieces from the Legendary Soulman Sam Moore book that I have been working on for several years. The NYC show exhibited three newly revised Bibi Art works and three newly revised artworks from the Sam Moore SOULebrity Art show. Two of the Sam Moore pieces are a collaboration with Rodney Jackson. The third one, artist Angelo Martinez also participated in the piece.

maz: What was your âahaâ moment where you knew that you had âarrivedâ as an artist?

BA: When I sold my piece of art from a postcard. I had a friend named Hank who was a developer in Miami Beach. He took one look at the card and said, âI want this one.â When the piece was ready for delivery I went to his new place, and he had some fantastic art on the walls. He literally told me that he buys the first piece of art from artists that then go on to be famous. 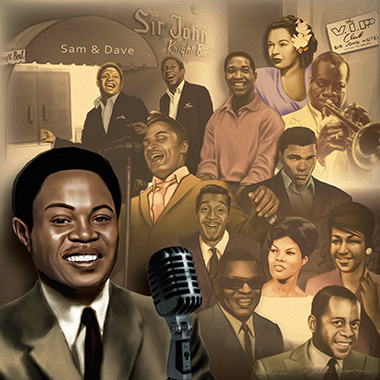 Collaborative artwork pieces from the "Legendary Soulman Sam Moore" book that Andrade has been working on for several years.

BA: That would be âThe Ghost of St. Peter.â True story. I caught a ghost on film at the Vatican in Rome. It is great story but too long to tell.

BA: Yes. I wanted to give the image to the Vatican but sat on it for years. About 10 years later I entered the photo in a contest and missed the deadline by an hour. Anyway, I got a phone call from the woman who was making the selections and told me it was an amazing photo and I should enter again. Instead, I took the St. Peter photo and another photo of the Virgin Mary that I photographed in Calabria and put them together as a 3D Flip piece. I brought the art to my church, Unity on The Bay, one year and the minister said he was having a âphysical reaction.â We put the art in the foyer from Christmas through New Yearâs. The piece flips back and forth between Peter and Mary and people were praying in front of the art. Some even got down on their knees. It was a powerful experience and yes, I still have the art!

maz: Youâre always working on something. So whatâs next?

BA: My new book is dropping in September and this one is the Renaissance & Art edition. The whole book will be a piece of art and segments will be NFT pieces for Art Basel.

I started a new business call Bibi Art Media Inc. It will incorporate the comic books of which a new Miami Beach book is coming this year, various art projects including a spectacular lighting project with German artist R.O. Schabbach, the Bibi Museum Store merchandise (my custom sneakers are a hit), the release of the new Sam Moore book which I been working on for some years now, and I also am appearing as an influencer in the new Miami Beach Ad campaign âTake Care of Our Cityâ! I also have an art site www.artdecembermiami.co that gives free marketing to other artists and art events in our city and beyond. Of course, you can visit my website www.theadventuresofbibiandfriends.com to see my comics and www.soulmanart.com to preview the Sam Moore project.