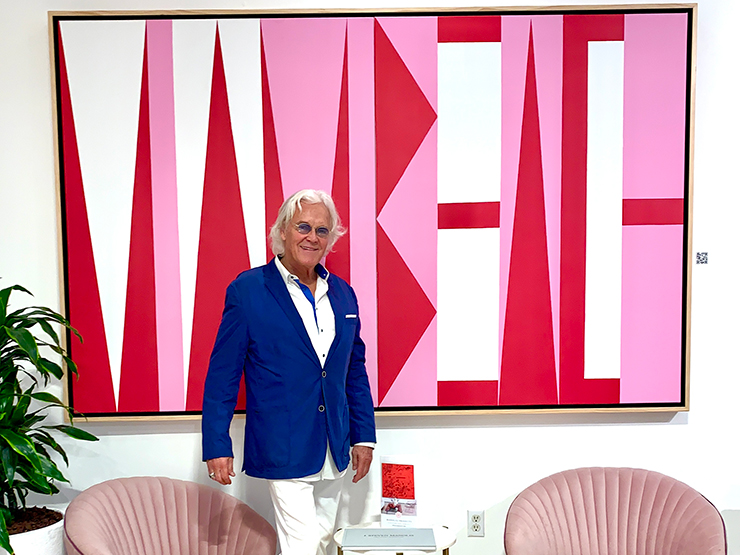 Artist Ron Burkhardt remembers when his signature work that is now a genre in American contemporary art, Notism, began.

He owned an advertising agency in New York City and recalls that he was at a party.

"I had all these notes in my pocket and an Italian art dealer saw them and he found it fascinating. He compared it to something that Jean-Michel Basquiat would do."

Burkhardt hadn't really "done" anything with the notes. He said they were more like hieroglyphic scribbles notes taken in business meetings and his to-do lists.

He's still prolific in his notes. "Some are phone numbers of people I know, notes about people I have to see, projects, art that I'm working on. Almost anything and everything. There were ideas for ad campaigns in those days, these days there are notes for art series. Just anything that comes into my head."

Now they are one of three of his art genres, which also include LetterScapes and Art Canvases. His work is on display through May 7 at the Manolis Projects in Miami.

He explains Notism as the "Art of the Note" and says the notes come together to create a unique pictorial language that reflects urgent efforts to preserve personal and rapidly fleeting histories.

He then recreates the words in canvases. "I add a lot of paint color and texture to it at that point," he says. 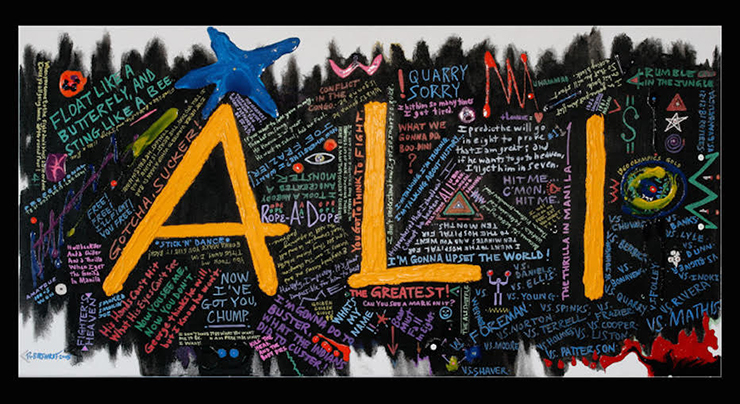 It's two parts conceptual which is the beauty of memory fragments this is a way of recording and documenting personal history and executional which looks like hieroglyphics but that's raw and primal and it takes us back to maybe the days of the caveman," he says.

His art career grew out of the tragedy of 9/11 in New York City. He was CEO of his own ad agency and lived in New York after being in the advertising business from 1985 to 2005. He had done a show right before 9/11, but after the tragedy, he started to ponder his own mortality.

"I left the city. I had a home outside of there. And I went there for several months. I started thinking that art seemed a lot more meaningful than creating a clever Super Bowl Commercial, which I had just done at the agency. It all seemed so frivolous by comparison, whereas art seemed enduring and outlasting. The greatest advertisement is of all is forgotten quickly," he recalls.

Then he decided that it was time for his own rebirth. That 9/11 had made him realize that life is fleeting. "This is my new life that I've been granted and I wanted to do it differently. It was my way of freeing myself." 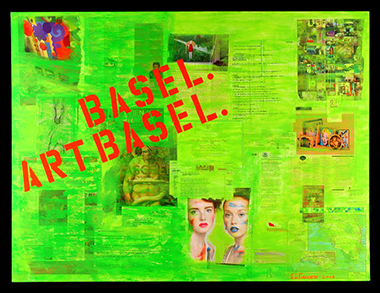 He started to move away from the ad business. He enrolled in The Art Students League of New York and The National Academy of Fine Arts. "Most of them said, don't change what you are doing."

Originally from Jackson, Mich., he worked Detroit, Denver, and Chicago and then Atlanta. "I met people when I was there from New York in the ad business. They were the exalted ones in the New York business. I was intimidated by the big city, but once I did go there,Â  everything started changing. I had so many contacts and exciting things. I was going to for 1 or 2 years but I stayed for 21 years so much happening."

He then spent some time working on his art in Laguna Beach, Calif., while still keeping his connection to New York. And then he was introduced to Florida. "I would come down to Florida and see this world and thought well it's about the only place in the country that I don't know much about it and that seemed appealing." Now he lives in Palm Beach and works in his art studio in Miami.

He's created two other art genres in addition to Notism.

In 2009 he created his second significant genre: Earth Art paintings. Forged out of natureâs own materials and organic textures with canvases fuse acrylic and enamel paint, rain and pond water, indigenous soil, snow, and intense sun over a period of months to create otherworldly shapes, dimensions, and color forms.

"It is very organic and unique. Totally opposite of Notism which is scribbly hieroglyphic letter forms and this is totally unstructured. I basically let nature paint in between the water and the soil and the sun. I kind of start it and see where it goes and then I add to it. I like to say ultimately nature does the Earth Art paintings."

He says that Earth Art takes us back to lifeâs most basic foundations. Rooted in earthâs gritty reality, this organic art form reveals intriguing depths and layers of color substrates forged from the planetâs crust.

In 2013, he discovered his third genre of work, LetterScapes word portraits. Burkhardt blends words and letterforms into rich geometric patterns-startling color fields that spell nearly words in his own abstract alphabet.

The oil on birch wood and canvas paintings are evidence of a unique new visual language. While easily traced to his pursuits in Notism, the precise new LetterScapes break the executional mold, no longer relying on thrown paint and frantic scribbles to communicate, but now reflect a series of bold, linear designs that form abstract words.

He said the LetterScapes came out of two months of recovering from a detached retina. "I had my head down and I was doodling and a dealer in the Hamptons saw them and said, 'these are terrific. Do more. I said, 'Really?" Every year, they get more and more precise. Ironically that one does grow out of Notism even though it was interrupted by Earth Art. That's a much more precise form of letterforms and word portraits."

He explains further: These are geometric color blocks that spell words. You don't know it's a word until you know the title.

He says he's like a draftsman when he works on his LetterScapes, laying them out with pencil and ruler and tape. He adds layers and layers of paint. "At that point, most people think it looks done. But that's when I have twice as much time ahead of me. Then I go in with thousands of tiny dots and I see the flaws. In my mind, they have to be literally perfect."

Ron Burkhardt in 3D is at the Manolis Projects Gallery, 335 N.E. 59th St., Miami, through Saturday, May 7. Closing party is Wednesday, May 5 from 5 to 9 p.m. For information, www.manolisprojects.com.