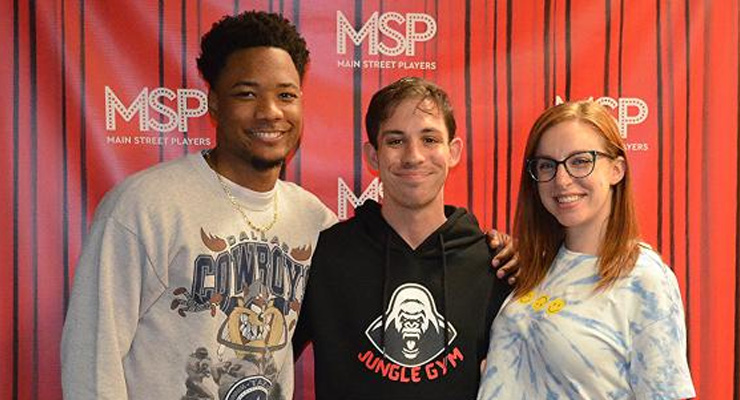 (from left to right): Actors Joshua Lyons, Brandon Hoffman, and Melissa Bibliowicz as themselves onstage in preparation for "Wolf & Badger" at Main Street Playhouse in Miami Lakes.

The issues of betrayal, drug use and sibling rivalry are highlighted in âWolf & Badgerâ by playwright Michael John McGoldrick at Main Street Players in Miami Lakes.

Anger and sadness are the dominant emotions demanded of the actors in McGoldrick's play. The story centers on two half-brothers and their unwillingness to look after their aging, frail mother, who is on dialysis.

The siblings Landon (played by actor Brandon Hoffman) and Maddox (Joshua Lyons) battle between themselves on how to best cope with her against their desire to break free from their environment.

Set in 2016 in upstate New York, the play opens with the two brothers bickering about who is better suited to look after their mother. And as plot continues to unfold, what's at the crux of the rift between the two is revealed: Which brother is more likely to be set free of the burden of staying at home as a caregiver to Mom?

We also learn that the title of the play is a metaphor of a childhood game called Wolf and Badger, and in this case, brother Landon is the prevailing wolf and Maddox, the swift, but submissive badger.

Landon's past is impacting his present: The former drug user was tossed out of his home by his wife and wrought with anger over having to return to his mother's home. Maddox is planning to leave home to join the Army to escape the toxic home environment, but becomes less willing to do so as he surmises his older brother to be mentally unfit to look after their mother. 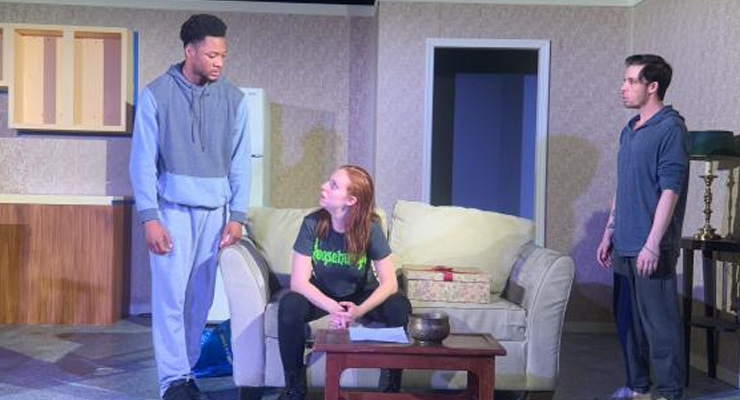 (from left to right): Actors Joshua Lyons (Maddox), Melissa Bibliowicz (Ainsley) and Brandon Hoffman (Landon) confront each other in a scene from "Wolf & Badger" at Main Street Playhouse in Miami Lakes.

Halfway through the 90-minute play, Maddoxâs ex-girlfriend Ainsley (Melissa Bibliowicz) adds fuel to the brotherly battle by imposing her problems on the pair. Her introduction and addiction to drugs to the story provokes the three characters into a situation that escalates into violence that builds into a surprising turn of events for Ainsley, Landon and Maddox at the play's end.

There is strength in the three actors and the direction by Danny Nieves to build on the script with the trio consistently trying to up one another in superiority.

As the repressed Maddox, 18-year-old Joshua Lyons stands out with the depth of character he shows as the sibling on edge of having a nervous breakdown. Through his portrayal, it is apparent that of all the characters is wanting and willing to be on a path to a better life. Lyons, from Miami Gardens, makes his theatrical debut with "Wolf & Badger." He only recently graduated from the Magnet Drama Program from Michael Krop Senior High School.

Bibliowicz and Hoffman have a slow burn with their aggression and use body language well to portray their emotions. They dig deep into what makes an addict tick and are believable in rationalizing their many lies to explain their drug use.

The absence of the mother, who is alluded to being in the next room, and present only through the conversation of the three actors doesn't work in some ways. Be it the fault of the director or of the playwright, it interrupts the realistic tone of the play to have the characters only speak of her.

Perhaps an offstage yell for attention or another demand would have made this less of an interference and the character as more vital to add to the tension so pervasive in brothers' problems.

Hoffman, from Plantation, was last seen in "Miami Motel Stories," and Bibliowicz may be recognizable to Main Street Players audiences for playing Alex in "Church and State, which was the show just before the pandemic shuttered theaters at the Miami Lakes playhouse.

The play is only one act and runs 90 minutes long.

Performances are on Fridays and Saturdays at 8 p.m. and Sundays at 2 p.m.

âWolf & Badgerâ is also streaming on video from July 30- September 5. Tickets are $30 and $25 for seniors and students and $10 for video streaming. For tickets and more information, go to www.mainstreetplayers.com or call 305-558-3737.