Touring Musical At The Arsht Is Sheer Beauty

In an era of sexual harassment claims, and Hollywood moguls and politicians getting unseated for their abuse of power and then some, "The Color Purple," the Broadway musical rendition of Alice Walker's book stings when its female character gets beaten by a man who didn't even want to marry her, uses the young girl as a built-in servant, and displays cruel, animalistic ways with her in the bedroom.

The first act works its way around the rough stuff of Walker's novel, treating some of the brutality with a more sensitive hand. And some beautifully inventive direction (from the master of invention John Doyle, the Tony Award winning director and scenic designer) finds Celie at the open, pregnant with, as we remember from the book, her abusive father's baby, gives birth to the child. She pulls a plain white sheet from inside her dress, then swaddles the sheet into what gives the illusion of a baby wrapped in blanket. It's just one of the beautiful touches that makes "The Color Purple" a musical work of art.

There's so many reasons to see "The Color Purple," now in a limited run at the Adrienne Arsht Center, and it isn't because anyone has done a yeoman's job of turning Miss Walker's page turner, and life changer into a musical, but because the acting and singing in this production is so absolutely brilliant that it makes up for the adaptation's shortcomings. I was puzzled why a musical based on a Pulitzer Prize winning book was so short of dialogue, and, instead chose to be almost entirely sung through. 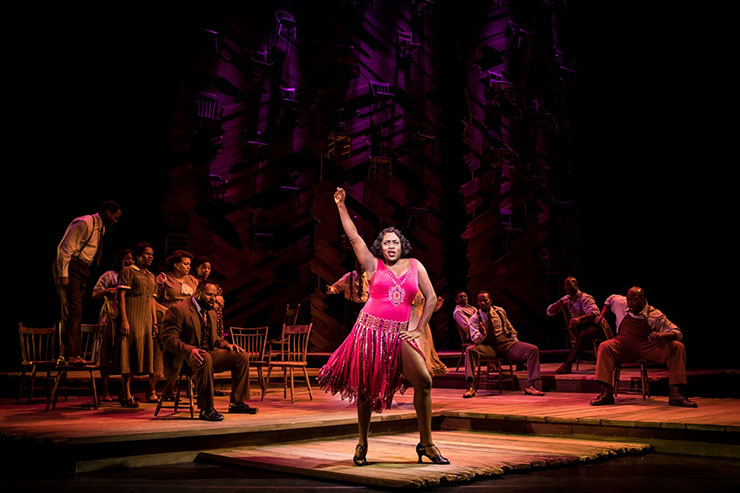 Truth to be told, my mouth wide open for 2 hours and 30 minutes (save the 15 minute intermission) over the abundance of talent; the voices in the cast, as an ensemble, and solo,Â  blew the rafters off the Arsht.Â

And, of course, a show with a title that's all about bright colors is as vivid as you can get, both in the staging and in the most engaging and animated character portrayals you can see on a stage.

Standouts are Adrianna Hicks as Celie, who your heart just bleeds for as her father gives her away to Albert, a brute of a man, who would rather have the prettier sister, Nettie. Celie's "Pa" throws a cow in, too, since Albert is getting the "uglier" one of the two girls.

As lovely on the eyes is how it sings to the ears. A rousing gospel inspired "Mysterious Ways" gives only a mere glimpse of the almost thirty song score.

The sensitive and touching "Too Beautiful For Words," which sultry cabaret chanteuse Shug Avery (played with such infectious spirit by Carla R. Stewart), sings lovingly to Celie, and the other Act I duet between Celie and Shug, the "What About Love?" are golden. The sexy "Push Da Button" and the spirited "Miss Celie's Pants" make sure "The Color Purple" has plenty of levity to balance a story rife with pain.

Carrie Compere wins over the crowd with her no b.s. character, Sofia, and when she sings her anthem "Hell, No!", you better believe she means it. In these times, the chant rings of some of the #metoo movement, and the audience's reaction shows we all agree, too.

When Celie finds her own voice, Hicks' rousing "I'm Here" towards the end of Act II is a moment of sheer wonder. You feel as if you've been witness to something truly wonderful. And, you have. "The Color Purple" is what good musical theater is all about.

Tickets to "The Color Purple," part of the Broadway Across Miami series, are available through the Arsht Center Box Office in person at 1300 Biscayne Blvd. Miami, FL 33132, by calling 305.949.6722, or online at arshtcenter.org. Ticket prices start at $29*.

THEATER: He plays all 18 roles from Ebenezer Scrooge to all of the Ghosts of Christmases past, present and future. How does he do it? Jan Engoren has the interview.

Design Miami : Edition #17 A Must See

ART WEEK: If the esoteric nature of contemporary Art Basel is not your glass of Champagne, check out the more practical nature of everyday objects infused with new ideas at Design Miami. Irene Sperber has the report from the scene.

Doral Live! Kicks Off Three Weeks Of Performances Under the Stars

FESTIVAL: It's new this year as Doral LIVE! turns downtown Doral into a performance destination. Michelle F. Solomon has the story.

Art Basel Miami Beach Recap: Back to the Future

ART FAIRS: Art Basel Miami Beach is back and the art, the star of the show, is exciting, raw and delicious. Irene Sperber has the story. 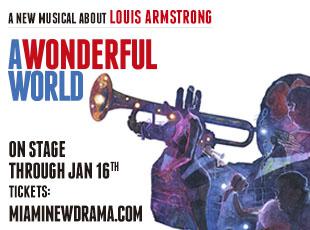