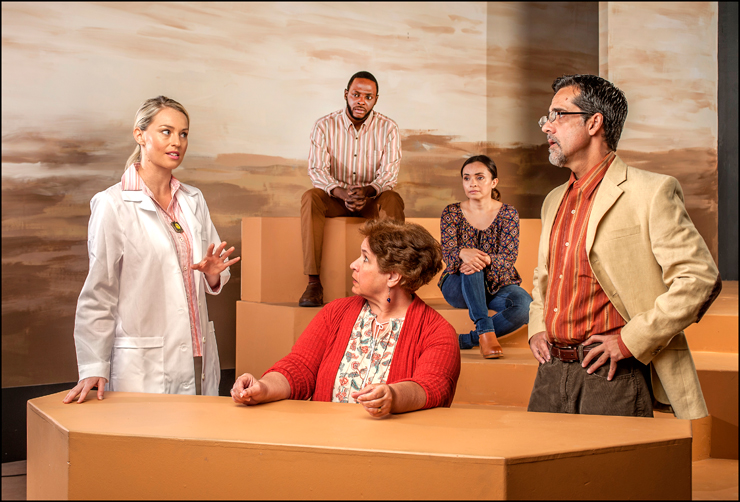 âTake my photo, steal my soulâ is the clichÃ©d taboo at the heart of âInformed Consent,âthe intriguing, anything but clichÃ©d, Deborah Zoe Laufer play that just opened at GableStage.

At first glance, it is a somewhat tame affair, with a less than star quality title, pitting science against traditional beliefs. Instead, âInformed Consentâ is a glue-you-to-your-seat-with-breath-bated, production.

"Give the girl a Carbonell" Betsy Graver is outstanding as exuberant genetic anthropologist Jillian, determined to save the members of the Grand Canyon's Havasupai tribe who are dying from diabetes. But more than diabetes is on Jillian's mind. Her mother died in her thirties from Alzheimer's disease. She is also falling into early onset Alzheimer's and is dreading the arrival of the same disease in her four year old daughter. Graver's emotions as she moves through her arc are subtle, moving and memorable.

Carlos Orizondo is Ken, smug social anthropologist who has studied the tribe for years, has lived with them, published a book on their ways, and is accepted with trust. He hires Jillian to find a cure for their diabetes. And nothing more.

Francisca Munoz is the dignified Arella, educated, well-traveled member of the Havasupai tribe. She leads their belief in the sanctity of their ways and legends.

And Elizabeth Dimon plays Jillian's stricken mother, a university dean, a tribal member, a mother at a children's party, all with the delightful flair that is her trademark.

Playwright Laufer directed âInformed Consentâ with the same skill she shows in her writing. She and her cast bring out every essence of the humor and sorrow of those searching for the truth of being. Can science be allowed to change the history of a person? Are legends inviolate?

Her play is a fictionalized version of the instance when the Havesupai tribe brought suit against Arizona State University because university researchers used the tribe's blood, regarded as sacred, for research other than for the stated purpose of a diabetes study.

A one hour and forty minute one act, âInformed Consentâ is presented on a simple stage with a few platforms representing canyon rocks, desks, living room, tribal areas and lecture halls. An upstage backdrop subtly changes color with locations.

With set by Lyle Baskin, lighting by Jeff Quinn, sound/music by Matt Corey and costumes by Ellis Tillman, this production is well up to GableStage's high standards.