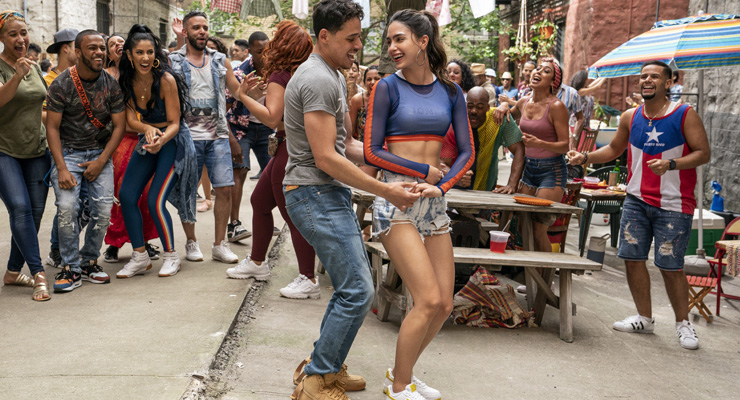 Anthony Ramos as Usnavi and Melissa Barrera as Vanessa in a scene from "In The Heights," a Warner Bros. Pictures release. Photo credit: Macall Polay. Copyright: 2021 Warner Bros. Entertainment Inc.

They come in waves. The bursts of pleasure bouncing off the screen hit the temporal lobe like the sugar rush from a fizzy drink. To experience "In the Heights" is to board an amusement park ride powered by fierce devotion to cultural heritage, diversity as a unifying force and, of course, those syncopated Latin beats. It's an immersion into the trials and insecurities that beleaguer Hispanic communities across the country, molded in the shape of a block party where everyone is welcome. You might find yourself fighting the temptation to get up and dance in the aisles, or your living room.

The COVID-delayed movie version of the Tony-winning Broadway musical hits the sweet spot early and often. As long as director Jon M. Chu, an inspired choice to bring "Hamilton" creator Lin-Manuel Miranda's distinctly Latino story to the screen, maintains that porridge-is-just-right balance between jubilant Carnaval atmosphere and a melancholy undertow just beneath the festive surface, the Warner Bros. release is the cat's meow. But even when the New York City-set production loses that lively spring in its step and steps up to the podium to deliver a rather heavy-handed pro-immigration message, it's all but impossible to hold a grudge. It bursts at the seams with bonhomie and an incandescent generosity of spirit. 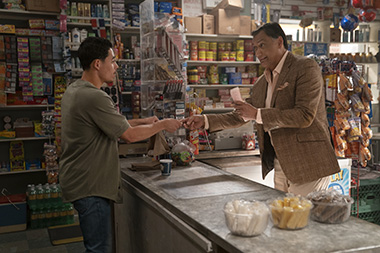 "Heights" starts in deceptively mundane fashion, as an old-school digital alarm clock rouses Usnavi from his slumber. The young Dominican man, played by Anthony Ramos, awakens to the unmistakable churning of a garbage truck. The drudgery doesn't last long, though. Once Usnavi steps out of his walk-up on this hot summer day, he breaks into the rap from the title track, and the movie springs to life like a gleaming carousel.

Using montage editing like a steak chef wields his knives, Chu introduces viewers to the residents of this corner of Washington Heights. Usnavi's motormouth delivery breaks it all down with the stop-and-start cadences we've come to expect from Miranda. Our charismatic, amber-eyed protagonist owns a small convenience store he runs with his cousin Sonny (Gregory Diaz IV), but he's looking to return to his motherland in the Caribbean to rebuild his late father's beachside bar.

Across the street from Usnavi's bodega is a cab company run by Puerto Rican patriarch Kevin Rosario (Jimmy Smits) and star employee Benny ("BlacKkKlansman's" Corey Hawkins). Benny, meanwhile, pines away for Nina (Leslie Grace), the boss' daughter, who's away in Stanford making Daddy proud. Or so he thinks. 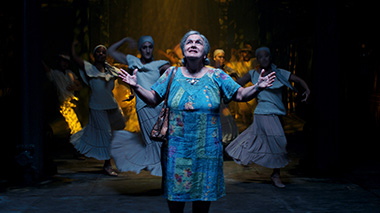 Steps away is the local hair salon, run by fiery and sassy Daniela (Daphne Rubin-Vega) alongside hairdresser Carla (Stephanie Beatriz), where the gossip that circulates is hotter than the hair dryers. One of their beauticians, Vanessa (Melissa Barrera), has fashion design aspirations but lacks the connections she needs to get her foot in the door. Does she have room in her enterprising itinerary to give a bewitched Usnavi the time of day?

Monitoring the comings and goings of this spirited bunch like a guardian angel is Cuban-born Abuela Claudia (Olga Merediz), the glue holding this tight-knit community together. She is a sea of calm in this frenetic roundelay. Her motto? "Paciencia y fe" (patience and faith). Popping up at several intervals is Miranda himself, a pleasant comic relief as the neighborhood's piragua seller. (No, really, the character is called "PiragÃ¼ero.")

It sounds like a lot of information to take in, but Chu and screenwriter Quiara AlegrÃ­a Hudes, who also penned the book for the stage show, make the characters' connections seamless and easy to follow, thanks in part to a cutesy but effective framing device that has an older Usnavi telling the story to a group of children. It also gives the character to explain how he got that strange name. To give the narrative more of a spine, the filmmakers remind viewers the characters are mere days away from a citywide blackout. Its significance is rarely in question: it marks a turning point for the residents of this barrio. 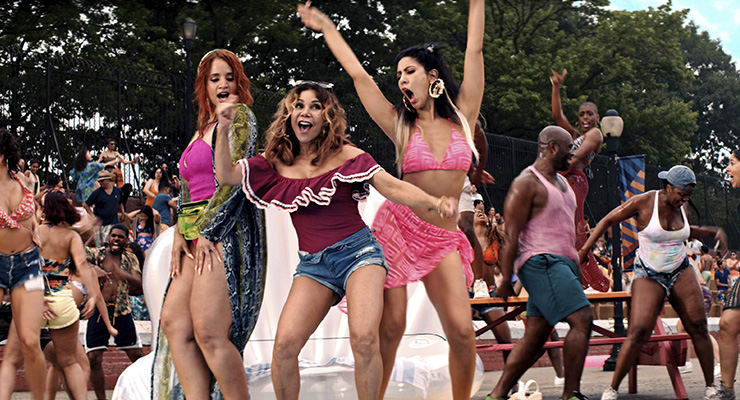 But what kicks the story into gear is the unexpected return of Nina to her old haunts. Mr. Rosario's pride and joy, you see, intends to drop out of Stanford for reasons that make for a juicy exploration of bicultural angst, that feeling of helplessness and inadequacy that Latinos experience at some point in their American adventure. It's an identity crisis brought forth by societal pressures and good old-fashioned prejudice.

And for a sizable portion of the film's fairly hefty yet never flabby running time, Chu skillfully weaves in the source material's timely social agenda into his otherwise frothy scenario. When they sing "96,000," for instance, the characters reveal their plans if their lottery ticket is the winning one. Mostly staged at a community pool, the director turns this ditty about the pursuit of the American dream into a colorful number that splits the difference between Busby Berkeley and Esther Williams. Chu stages most of the numbers in way that feels at once traditional and modern: not quite an MGM musical, but not quite fully embracing a music video aesthetic, either. He's made a film that's unashamed of being a song-and-dance extravaganza, but also reaches across the aisle to appeal to those who bristle at the prospect of all that singing and dancing. 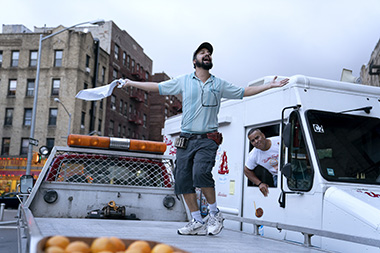 It's a good thing, as it turns out, that "In the Heights" is such a solid display of gang's-all-here showmanship, because it makes some unfortunate stumbles during the second half. An ongoing discussion of the glass ceiling the characters encounter abruptly veers into an impassioned defense of the undocumented. What zipped along with the airy confidence of a rom-com takes on a weight it struggles to carry, and a movie that was able to juggle so many themes in a way that felt effortless misplaces its infectious rhythm.

With so many things on its mind, "In the Heights" nevertheless attempts to give breathing room to the burgeoning romance between Usnavi and Vanessa, but their interaction feels like it has been negotiated by the actors' public relations teams. On top of that, the film's resolution hinges to a significant degree on these characters' bond. A formulaic turn of events is nothing new for Chu, who turned "Crazy Rich Asians," novelist Kevin Kwan's ruthless dissection of Singapore's elite, into a big-hearted crowd-pleaser. That film adaptation's climax, however predictable, worked because stars Constance Wu and Henry Golding had such ingratiating chemistry. I can't say the same for Ramos and Barrera.

And this may sound like a quibble, but for a movie that's being released during Pride Month, it's surprisingly timid about its queer content. Daniela and Carla are clearly depicted as a couple, even as they're too often relegated to the edges of the frame. In this tapestry of diversity, they get the short end of the stick. 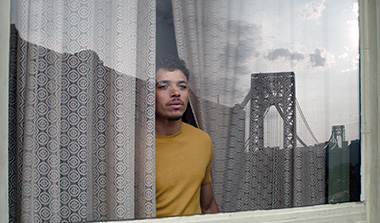 It's a testament, then, to "In the Heights" strengths that the film is so winning despite these drawbacks, thanks in large part to Ramos' star quality. He may not set the screen on fire opposite Barrera, but he rises up to the challenge of being this ensemble piece's leading man. This critic knows a star-making performance when he sees one, and Ramos, whom you may remember from Bradley Cooper's "A Star Is Born," delivers a star-making performance. The sky is the limit for this native New Yorker. Merediz, who originated her role on Broadway, is also exceptional.

And "In the Heights," held back for far too long, is the ray of sunshine you didn't know you needed. It's nimble and light on its feet a lot more than it isn't, thanks to top-notch production values and a genuine fondness for its setting, as well as for what the setting represents. Its idealized version of Washington Heights stands as a microcosm of Latinos in the U.S., determined not to let the never-ending struggle get the better of them. They've been gifted an exuberant showcase that, for better and worse, is a large family gathering with a conscience, and that's worth celebrating. For those of you looking for the ideal summer release to end your moviegoing hiatus, look no further. This is the one.

"In the Heights" is now playing in wide theatrical release, including IMAX and Dolby Cinema engagements at AMC Aventura and AMC Sunset Place. It will also be available to stream on HBO Max for the next month. 2021 is shaping up to be a promising year for movie musicals. In addition to Steven Spielberg's "West Side Story" remake, slated to come out in December, Miranda's directing debut, a screen adaptation of Jonathan Larson's "Tick, Tick...BOOM," is set to drop on Netflix and have a limited theatrical run later this year.