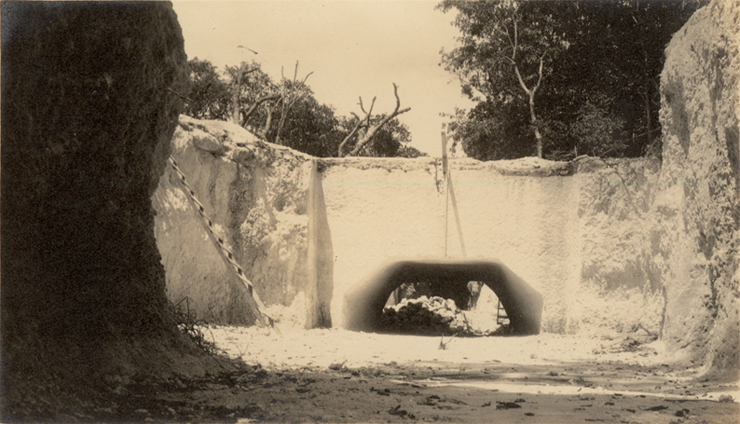 Historical picture of the moat.

One hundred years ago, Vizcaya was the summer home of James Deering, a wealthy agricultural entrepreneur, conservationist, socialite, and art collector from the Northeast. A snowbird, he had hopes that his pernicious anemia would improve with sunlight during the winter. Inspired by the lavish castles of Europe, the businessman along with his interior designer, Paul Chafin, decorated its rooms with exquisite furnishings, including many antiques and artworks from their travels abroad, particularly to Italy in the early 1990s.Â

Fascinated with the age of exploration, Deering adorned his villa with maps, globes, and statues of conquistadors. A figure of the explorer âBel Vizcayaâ welcomes visitors at the propertyâs entrance, and The Caravel, a ship used during the era is the emblem of the villa.

A patron of the arts, Deering commissioned prominent artists of his time to create sculptures, murals and paintings for his seasonal getaway. Throughout all these decades, his art collection has been preserved along with most of the antiques and lavish decorations in the rooms of the main house.

Most of the premises and gardens reminiscent of the Italian Renaissance have been maintained as well, making Vizcaya a human feat of architecture, engineering and art.Â But after ten decades,Â theÂ stories behind the spaces have beenÂ forgotten, andÂ some of the spaces themselves have been lost.

Inspired by the museum and gardens' upcoming centennial, Gina Wouters, the curator of the Contemporary Arts Program, conjured the idea forÂ the latest exhibition Lost Spaces and Stories of Vizcaya.Â Â The two phase showcase, opening Thursday, May 5, 2016, will provide visitors with a glimpse of the life that Deering, his guests, family and servants would have experienced at this gorgeous summer getaway from 1916-1925. Eleven local artists were selected from aboutÂ 100Â applicants to bring to life the lost spaces and stories of Vizcaya through mixed media art forms.

Included in the lost spaces is the former moat, which is located near the ticket booth. Deering had it constructed in the tradition of European castles as a security measure against unwanted invaders. He initially sought to fill it with water but the coral stone soaked it up; so, instead, according to local papers, he put cacti in the trench. Now, it's overgrown with tropical vegetation, and most visitors unknowingly walk over it upon entering the estate. Artists Duane Brant has created a visual âwhite stripâ installation within the channel to remind guests of its original role as the territory's first line of defense and of Deering's desire to exude an air of royalty. Juraj Kojs will present a sonic display of ambient sounds emanating from the conduit. 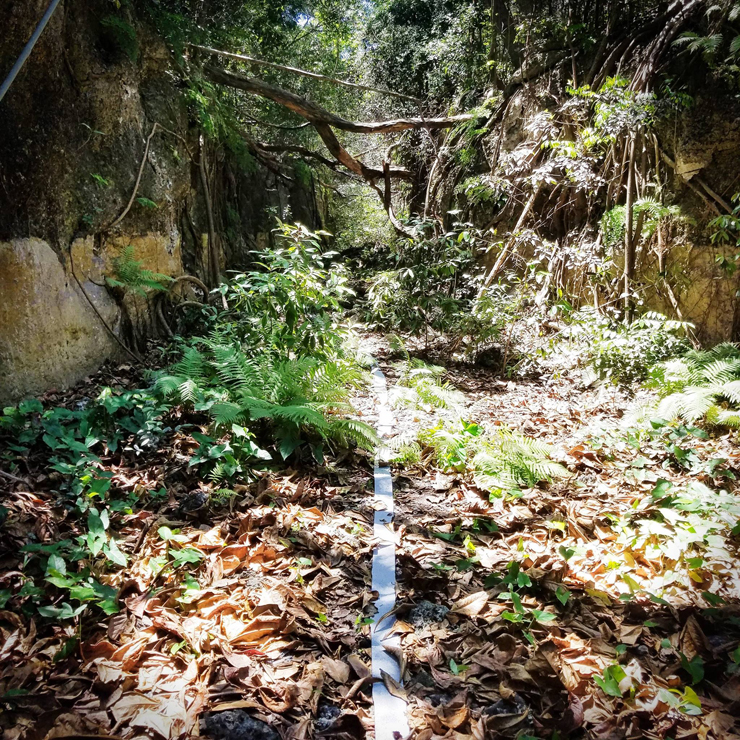 The Moat Reimagined by Duane Brant.

No castle is complete without a cast of servants, and Vizcaya was certainly no exception. Many people don't know that the wait staff's old living quarters are located across the street next to the current space museum. They mostly serve as the offices for Vizcaya's employees. Nevertheless, the estate itself holds many remnants of the presence of hired help. There are bell pulls in almost every room. Artist Frances Trombly created modern bell pulls of silk and pastel colors, which are displayed in place of the historic ones. One can only imagine guests pulled on these in order to summon a maid or butler for tea or a refreshment in the afternoon. There are also two serving stations in the main house where servants prepared plates in fancy china after food was brought down from the kitchen upstairs.

For the most part, these stations are still intact with the original serving dishware; in one of them, some dishes had to be replaced after being lost in the Titanic disaster. In order to animate the lives of the people who worked at the estate, Artist David Rohn created fun portraits of the former staff with a twist: they are all self-portraits. These spooky framed photographs have been placed in various rooms including one of Deering's bedrooms, where a portrait of a young man rests on a night table, alluding to the suspicions of the wealthy bachelorâs penchant for men.

Just because it was a decade past the turn of the century doesn't mean these folks weren't having sexual trysts. They were quite isolated, basically in the middle of nowhere. This area was mostly a tropical jungle at the time, with accounts of alligators crawling nearby in the mangrove forests. Â In fact, one of Deering's bedrooms was connected to a bedroom for female guests, which shared a bathroom with his (so much for the rumors of homosexuality). Some of the drama that may have ensued will be imagined in a telenovela created by artist Magus Sigurdarson. It will be played in one of the museumâs only unfurnished âwhite spaceâ exhibition rooms.

TheÂ villa'sÂ decadence is also evident in the Latin quote on the east faÃ§ade of the Main House translated as, âAccept the gift of pleasure when it is given. Put serious things aside.â Artist Amanda Keeley's installation features a neon rendition the quote, which is slightly different than the above interpretation as is seen in the picture below.Â Â The sign is aptly located in a lobby-style room facing the majestic views of the bay, which many people who go to Vizcaya for a party enter. I imagine Deering would be pleased with the way his legacy is being upheld through one of his favorite pastimes, art. 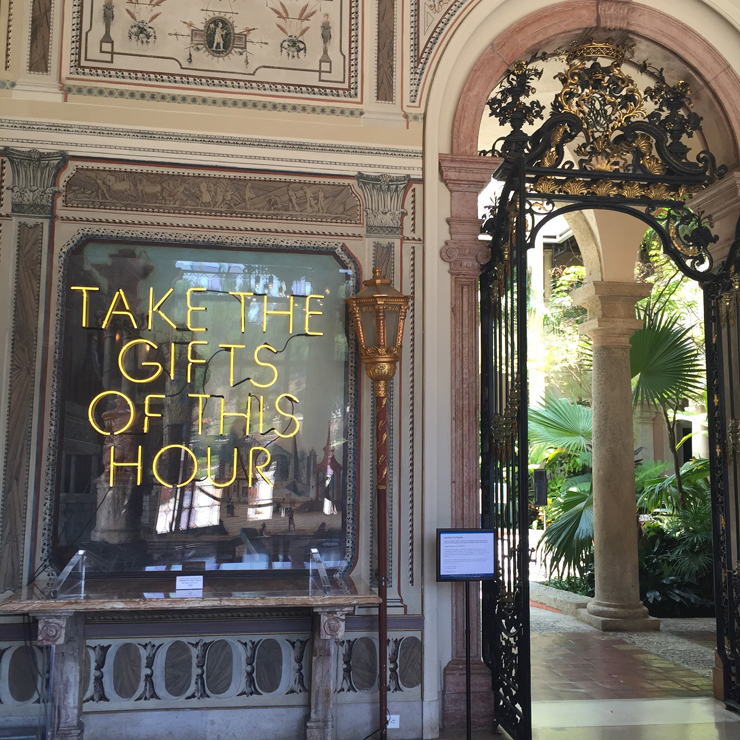 Aligned with the estate owner's love of exploration, Lucinda Linderman has recreated maps of Vizcaya in the 1920s, today and fifty years from now, which have been placed in the empty map racks. She brings awareness to the threat of climate change, depicting Deering's wannabe castle half underwater. She used pieces of plastic in her hand-woven charts to further allude to the environmental destruction caused by human carelessness.

In Lost Spaces and Stories of Vizcaya, the modern and the historic collide through art that showcases local talent and keeps the legacy of an era alive. It seems only through art can we embrace the past, yet keep our eyes peeled like explorers on the future.

Phase I will be on view from May 2016 through May 2017 and features Duane Brant, Amanda Keeley, Juraj Kojs, Lucinda Linderman, David Rohn, Magnus Sigurdarson and Frances Trombly.

Phase II will be on view from December 2016 through May 2017 and features Brookhart Jonquil, Mira Lehr and Yara Travieso, Kerry Phillips and Leyden Rodriguez Casanova.

Opening night reception takes place on Thursday, May 5 at 7:30 p.m.