From Overture To Curtain Calls, Musical Bigger Than Life

Feet were tapping from the overture all the way through to the long extended curtain call for "Mamma Mia!" at Actors' Playhouse at the Miracle Theatre in Coral Gables. Most of the sold out crowd knew the show and many were seeing it again. A couple in the lobby prior to the show told me they drove from Ft. Lauderdale to see it for a sixth time, having seen it all over the world.

The musical is bigger than life. It must be an acquired taste. Or it's the ABBA music. The book of "Mamma Mia!" by Catherine Johnson is thin and relies on exposition to hang the songs and fill in the story. Most of the songs, radio hits, are so popular that they are ingrained in our psyche. 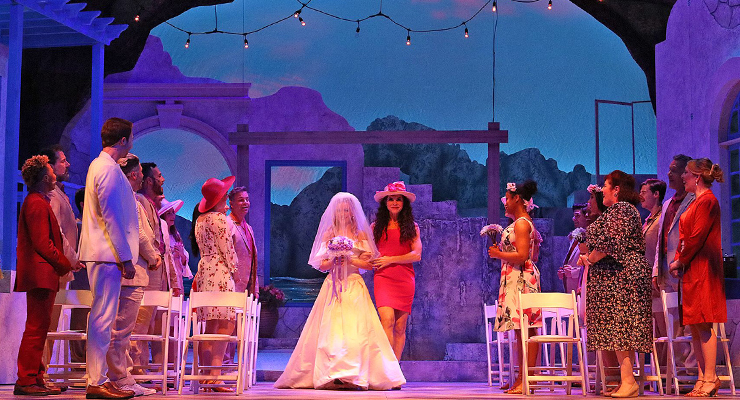 The cast of Mamma Mia! at Actors Playhouse at the Miracle Theatre. (Photo by Alberto Romeu)

Jodie Langel, a tall, stately woman with a big voice, plays Donna Sheridan, the single, unmarried mother of Sophie (Meredith Pughe) who has never known her father. After reading her mother's old diary, Sophie discovers there are three potential "Dads" for her. Behind her mother's back, she invites all three to her wedding. That's basically the story.

The three potential Dads are written to be fun and funny and you can see why even twenty years later, Donna would have spent time with them. Jim Ballard as Sam (reprising the same role from the Maltz Jupiter Theatre production last January) , with his good looks, has a strong, lyrical leading man voice. Mark Sanders as Harry, gives the audience a lot to laugh about with his physical antics. And the Aussie, Bill, played by Ed Kemper, adds to the humor.

Donna's two girlfriends from the days they sang together also show up for the wedding. Margot Moreland as Rosie (another reprise from Maltz's production), is the ultimate comedic actress. She and Bill have the audience laughing throughout the brassy song âTake A Chance on Me.â

Sarah Rose, an understudy, who'd never been blocked into the show, replaced Mandy Striph as the other girlfriend Tanya, after only four hours of rehearsal. If they hadn't announced the replacement beforehand, you would never have known. She danced and sang as if she was made for the part. She has a great voice, dances really well and she must have nerves of steel to go on after so little rehearsal. Brava! 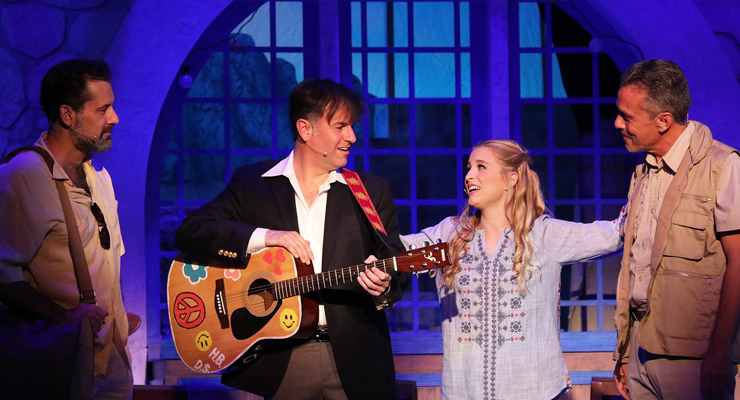 Both Pughe and Drew Arisco are well cast as the bridal couple.

The ensemble of singer/dancers deserve special mention. They are technically strong, joyful in their movement and so well rehearsed. The show was choreographed by the talented Ron Hutchins.

The music was beautifully directed/conducted by Caryl Fantel. Her eight-piece live orchestra filled the house. Solo numbers had off-stage back up singers, so the music throughout had the real feel of the harmonies of the ABBA originals.

It's a large expansive show. When you go, don't leave after the first curtain call. There are several calls and they get bigger and better.