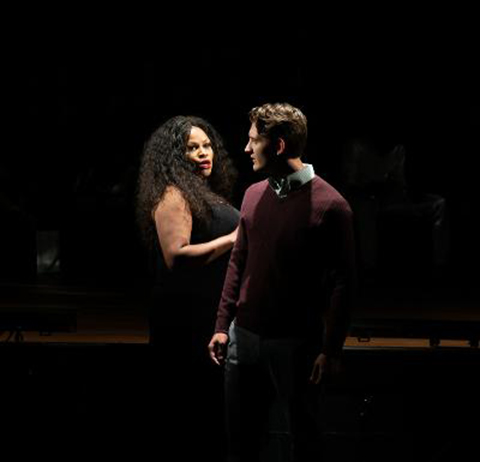 Titania (Chastity Hart) and Director (Matthew Salas) appear in a scene from Main Street Players' production of "Shakespeare is a White Supremacist." (Photos by Olimac Media)

In his eye-opening, smart, incisive, and drily funny new play, "Shakespeare is a White Supremacist," Andrew Watring doesnât mince words while describing the problem live theater, and society in general, have with race.

âWe are all white â and we donât f------ talk about it!,â a fictional director says at the beginning of Watringâs piece. âIâm sorry, but itâs true. We are ignoring a wave of beautiful artists and creators that are right under our noses. Performers of color need to see that we are on their side if theyâre going to come close to our theater.â

Watring gives no name to the aforementioned director. Perhaps this suggests that the problem is not specific to any one region. Indeed, itâs a universal problem. Kudos, then, to Watring for trying to keep the issue in the national consciousness by writing the play.

Meanwhile, Main Street Players (MSP) a professional theater company in Miami Lakes, deserves credit for producing Watringâs play. Specifically, an intense and compelling world premiere production of "Shakespeare is a White Supremacist" is on stage at MSP. It is running through Oct. 31.

In addition to live, in-person performances with COVID protocols in place, MSP is offering a âVideo on Demandâ version. It will be available one week after closing night.

"Shakespeare is a White Supremacist" does not feature a typical plot. Rather, a fictitious group of actors of color auditioning for a production of the Bardâs "A Midsummer Nightâs Dream" talk about their experiences dealing with problems such as prejudice.

In fact, the play seems so true to life that one could understandably think, without knowing, that Watring based the play on a true story. Well, in a way, he likely did. Chances are, theater artists worldwide have experienced situations similar to those the characters discuss. Indeed, simply search on the Internet the terms âlive theaterâ and race.â Youâll find articles such as one from the New York Times with the headline âWhite actors and directors still dominate Broadway stages.â

In the play, race and power collide to paint a sad but truthful portrait of what itâs like for artists of color to try to secure major roles that usually are awarded to white actors.

But Watring doesnât treat race as solely a black and white issue. Consider Juliet. She is an actress whom Watring describes as a middle-aged, Afro-Latina woman.

âPeople donât know what to do with me,â the dark-skinned woman says. âIf theyâre looking for a Latina â I donât look the part. Me, an Afro-Latina woman not looking the part. If they are looking for Black â well then, itâs the way I act. I donât perform Blackness to white expectations.â

Speaking of Juliet, itâs likely no coincidence that Watring named several characters after those in Shakespeare. The playwright is likely indirectly saying that directors should consider casting actors of color in traditionally âwhiteâ roles such as Juliet and Macbeth. (a young Black actorâs name in the play is Macbeth).

In the play, Watring never specifies a locale or time period. His objective is probably to reinforce the universality of the playâs themes.

The character named only âDirectorâ is a theater artist working at an unnamed fictional company. Evidently, it has struggled to bring artists of color aboard. And so, âDirectorâ decides to mount a production of "A Midsummer Nightâs Dream" âwith more people of color than weâve ever worked with.â

The playâs action takes place during auditions, callbacks, and possibly rehearsals. But there is downtime, during which the characters talk about their experiences. During one particularly memorable moment, Watring, in his direct manner, has Ophelia, a âwhite-coatedâ young Latina woman, pose a hypothetical situation.

Ophelia: "A strong, brooding white man walks into the audition room. The director sees them and thinks, 'There's my Hamlet. There's my Lear. There's my Macbeth. There's my Henry. There's my Romeo.' And they felt secure. They feel secure.

âA beautiful, sharp white woman walks into the audition room. The director sees them and thinks, 'There's my Cordelia. There's my Lady Macbeth. There's my Juliet. There's my Miranda. Thereâs my Beatrice. There's my Ophelia.' They feel secure. Shakespeare and his world is there for them.

âWhat does the director see when a Black man walks in? Just Othello? Can they see anything else?

âA black woman walks into an audition room. What does the director see? Anything?â 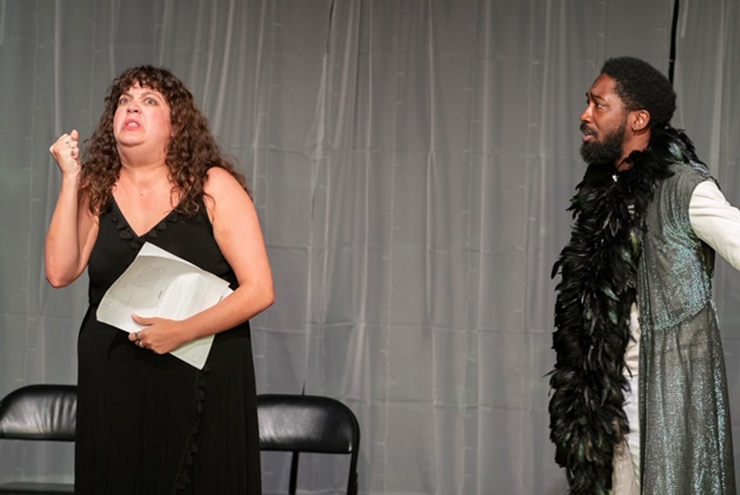 But, give credit to Watring for also giving voice to other sides, without taking sides or offering easy answers. For instance, a couple of white characters suggest that these days, it can be hard for even white actors to get parts. With theater companies trying to show that theyâre committed to diversity, they might turn down qualified white performers in favor of actors of color.

In this layered play, Watring also demonstrates how persons of leadership in live theater can demean subordinates by calling them names and generally bullying them. Indeed, there are quite a few tense scenes between the actors and the director. He might have indicated during the playâs beginning that heâs committed to diversity. But in later scenes, the director demonstrates that, like the other characters, heâs far from perfect.

In MSPâs production, which Carey Brianna Hart directs with sensitivity, the tension is palpable during such moments. Credit Hart and sound designer Alex Tarradell for including the sound of a beating heart, which enhances tension. On the other hand, sounds of applause and others that might be more appropriate for a childrenâs story seem out of place.

What doesnât seem out of place are the black, brown, and white colors of Amanda Sparhawkâs spacious, simple set. The colors correspond to the charactersâ skin colors.

Speaking of aura, it is upbeat and positive in the beginning as âDirectorâ states his intension to stage a production with many actors of color. A fresh-faced, enthusiastic, wide-eyed Matthew Salas brings âDirectorâ to convincing life. In a well-rounded, powerful performance, Salas also sounds and looks like heâs suffering credible, intense, and palpable emotional pain after his character says hurtful words.

Sometimes, Salas sits on the edge of the stage, and makes direct eye contact with audience members. At other moments, the actor walks amid the audience. These choices reinforce this playâs relevance to today. Itâs a time when groups such as Black Lives Matter are active and powerful figures such as former film and theater producer Scott Rudin resigned amid allegations of abusive and violent behavior.

By giving his characters such names, the playwright, in addition to suggesting the universality of this playâs themes, could be suggesting that some organizations do not treat artists like individuals.

"Shakespeare is a White Supremacist" can be hard to follow. Specifically, sometimes the action seems to haphazardly jump back and forth from audition scenes to those featuring callbacks. Or, are those callback scenes actually rehearsals? Itâs not clear. On the other hand, credit the ending for not leaving us with easy answers or solutions.

In his play, Watring appears to use racial problems in live theater as a metaphor for such problems in real life.

Director:Â "Does anyone have anything to say about (colorism)?"

Macbeth: "I mean, itâs real. Itâs a problem in our community. The darker your skin, the less appreciated you are. Iâve had people tell me Iâm too dark to date."

"Shakespeare is a White Supremacist" continues its run through Oct. 31 at Main Street Players, 6766 Main St. in Miami Lakes. For tickets and other information, call (305) 558-3737, or send an e-mail to mainstreetplayers.com.