Ukraine is at the center of worldwide news, but South Floridians get to enjoy something special from the country with a visit from its gem of orchestra this weekend. The National Symphony Orchestra of Ukraine comes to town this weekend with a performance of music, which includes what Russian-American pianist Olga Kern says contains a segment dedicated to the composer known as "Ukraine's Mozart."

Kern stars with the National Symphony Orchestra of Ukraine in two distinct South Florida concerts featuring the works of Berezovsky, Rachmaninoff and Tchaikovsky on Saturday, Nov. 16 at 7:30 p.m. at Arsht Center in Miami and on Tuesday, Nov. 19 at 8 p.m. at Kravis Center in West Palm Beach. 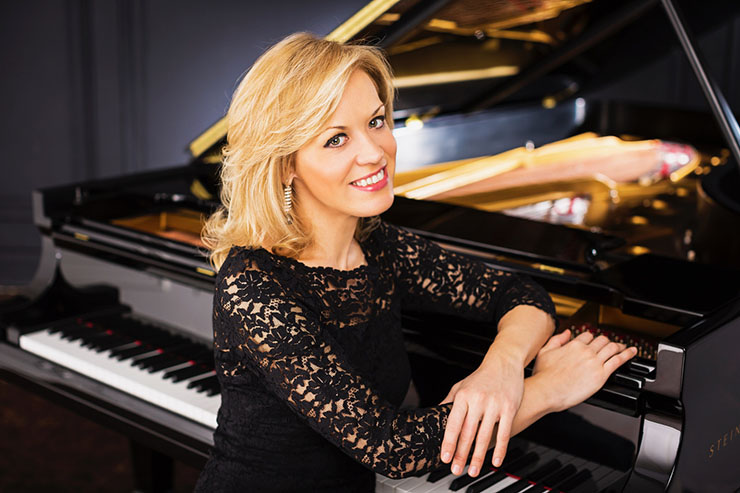 The Miami concert features Kern and the orchestra performing Tchaikovsky's "Piano Concerto Number 1" as the featured composition and closes with the performance of Tchaikovsky's"Symphony Number 6". "Symphony in C Major" by Berezovsky will be performed by the National Symphony Orchestra of Ukraine to open the program.

As in Miami, the West Palm Beach concert opens with Berezovsky's "Symphony in C Major", but features Kern performing with the orchestra on Rachmaninoff's "Piano Concerto Number 2 in C Minor" and closes with Tchaikovsky's "Symphony Number 1 in G Minor."

âTchaikovsky's music is beautiful with lots of gorgeous melodies and, knowing that Miami and West Palm Beach are not far apart, we wanted people to see both concerts to hear a wide variety of compositions by Tchaikovsky," said Kern.

â' Tchaikovsky's âPiano Concerto Number 1' has triumphant opening chords that are perhaps the most daunting and famous in all classical music."

Both concerts open with Berezovsky's composition as a salute by the National Symphony Orchestra of Ukraine to the composer described as "The Ukrainian Mozart."

Kern's highly touted skills as a classical pianist are attributed to her discipline and talent, but also her genes. The 44-year-old Kern was born into a legacy of musicians in her family. Both of her parents are classical pianists who still perform in concerts. Her brother Vladimir is a composer and conductor of classical music. Kern's 19-year-old son, Vladislav, is a classical pianist.

âI am very, very proud of having such a rich legacy of classical musicians in my family that has spanned close to 200 years. My family still has a program from Rachmaninoff's memoirs that mentions my great grandmother's name (Mezzo soprano Vera Pushechnikova) that I treasure."

âI always wanted to play piano. My mother was my first piano teacher. Even before I was born, I heard music because my mother was performing. I love the piano because it is the best instrument in music. The piano is an orchestra with a beautiful shape. With a piano, you can do everything in music on it," said Kern.

Born in Russia and now living in New York, Kern started to become proficient on the piano as a young child and gave her first concert at age seven. Kern won her first international competition by age 11. At 17, she won first prize at the Rachmaninoff International Piano Competition.

Kern attained international prominence when she became the first woman to receive the Gold Medal in the 11th Van Cliburn International Piano Competition in 2011 by her performance on the piano playing Rachmaninoff's Concerto Number 3.

âWinning the Van Cliburn brought me attention in the United States which included two performances at Carnegie Hall within two weeks and many concerts around the world," said Kern.

Along with performing with the world's most prestigious orchestras at acclaimed concert venues, Kern currently also teaches music at the Manhattan School Of Music, launched the Olga Kern International Piano Competition for pianists in 2016 and established a foundation with her brother to provide both artistic and financial assistance to developing young musicians.

The Arsht Center performance kicks off the 2019-2020 John S. and James L. Knight Masterworks season, classical music series.Â Tickets for the Saturday, Nov. 16 concert at Arsht Center, 1300 Biscayne Blvd. in Miami range from $50-$135 and can be purchased online atÂ arshtcenter.orgÂ or by phone at 305-949-6722.

ACADEMY OF ST MARTIN IN THE FIELDS