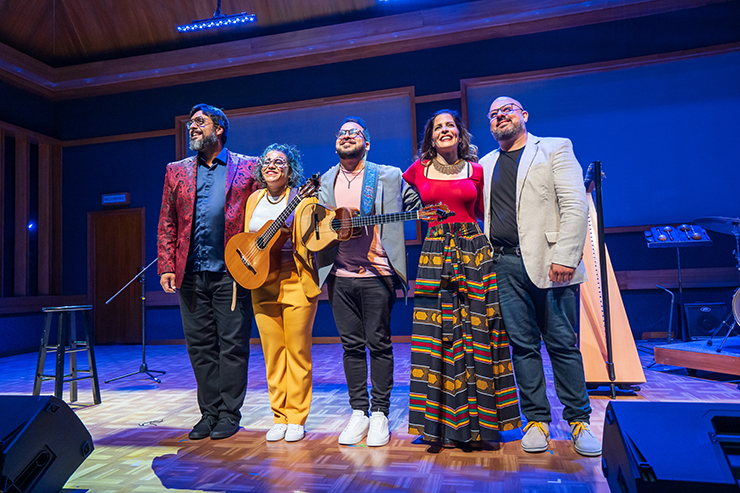 (Editor's Note: "PapÃ¡ Cuatro," originally set to close on July 31, has an extended run through Aug. 21)

To a group of Venezuelan immigrants, a musical instrument called a cuatro possesses almost humanlike qualities with the ability to unite and comfort others.

Â "I could almost hear the cuatro telling me, 'Relax, everything will be fine here,' " Miguel Siso recalls during Miami New Drama's (MIND) world premiere production of "PapÃ¡ Cuatro." It is a touching and relatable documentary play with music which arts manager and playwright Juan Souki conceived.

"Papa Cuatro" features five Venezuelan immigrants who play themselves; there are no actors.

During the show, the immigrants describe their experiences in their home country, as well as emigrating from Venezuela in search of a better life. While they had to leave some belongings behind, they brought their musical heritage with them.

In addition to having conceived "PapÃ¡ Cuatro," Souki directs the piece. It runs through July 31 at MINDâs home, The Colony Theatre in Miami Beach.

Souki based "Papa Cuatro" on about 300 hours of interviews he conducted. For the play, which MIND commissioned, Souki interviewed between 30 and 40 musicians, researchers, and immigrants. Ultimately, Souki, himself a Venezuelan immigrant who immigrated to Canada, narrowed his list to include the testimonies of five performers. In addition to the aforementioned Siso, they are Mariaca SemprÃºn, Mafer Bandola, Eduardo Betancourt, and Adolfo Herrera.

The immigrants perform the piece in Spanish. But even if MIND did not include English supertitles and you did not understand Spanish, you would get a sense of what the cuatro and Venezuelan music mean to these people. Indeed, they radiate a sense of joy, peace, and genuine emotion as they talk about arriving in their new country. In fact, if you ask them, the cuatro itself is an immigrant.

âThe cuatro isnât the kind of immigrant that wants to transform the places it visits into the places it left behind,â SemprÃºn says. âHe listens before he speaks, absorbs the sounds of each place heâs in, and when he feels at peace, he sings and sings as though he (were) born there.â

Speaking of singing, during the reviewed performance, audience members at times sang along with the cast members in Spanish. During other moments, they clapped along to the music. And the patrons often showered the cast members with enthusiastic applause. Certainly, these artists deserve it. Indeed, they speak, sing, and play their instruments practically flawlessly and with conviction, while telling a relatable story. Surely, if you ever left a place behind, and had to adapt to new surroundings, you should be able to empathize with the artists.

These talented folks perform on a stage with minimal scenery. Other than two large video screens upstage, scenic designer Frank J. Oliva leaves the stage mostly empty. This allows us to concentrate fully on the performers and their stories. The projection design, by Fernando Mendoza, includes photos from the immigrantsâ lives before they emigrated from Venezuela. The photos nicely complement spoken and sung words.

When cast members are not speaking or singing, they stand upstage, musically accompanying the featured performer. As a group, the musicians create a joyous sound without drowning out the individual singing.

Joy is an apt adjective to describe Sisoâs mood after he immigrated to Ireland on St. Patrickâs Day.

âItâs like the country welcomed me with a huge party,â he tells us. âAnd in the middle of all of it, my wife and I embraced and cried.â

One day, Siso went to a bar to hear Kila, an Irish folk music/world music group. A friend of his said, âThis guy plays the cuatro.â

Someone from the group invited Siso to play a song.

âThey gave me three chords and I started improvising,â he recalls. âAnd people went crazy. My wife was crying, she was so happy. I could almost hear the cuatro telling me, âRelax, everything will be fine here.ââ

Apparently, the cuatro was right. Soon, a Latino band needed a guitarist. Siso heard about the need and took his guitar and cuatro to let band members hear him play.

âWhen I got there, the lead singer was Cubanâ¦he was looking at my case.â

The man recognized the cuatro and, after hearing Siso play a couple of songs, wanted him to play the cuatro with the group.

What does the cuatro mean to Siso?

âThe cuatro for me is like a second heart,â he says. âThe cuatro is my home, my country, my family, itâs part of my soul.â

Siso received another huge honor in his new country. To learn what it was, attend a performance of âPapa Cuatro.â

Miami New Dramaâs world premiere production of âPapÃ¡ Cuatroâ runs through July 31 (extended through Aug. 7) at the Colony Theatre, 1040 Lincoln Road in Miami Beach. Performances are at 8 p.m. Thursday through Saturday and 3 p.m. Sunday. Go to www.miaminewdrama.org, or call (305) 674-1040.