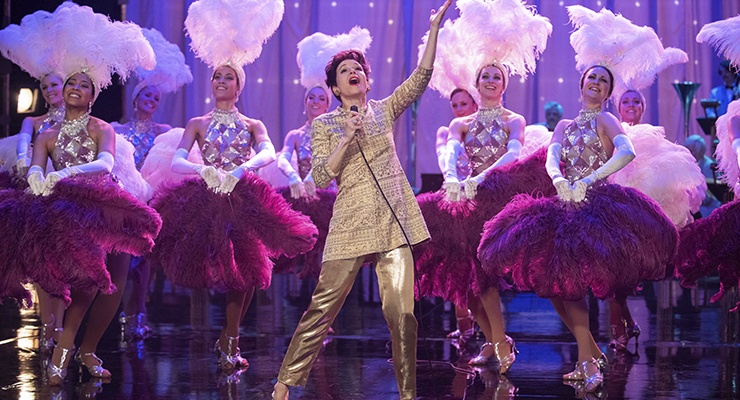 For a movie that purports to pull back the emerald curtain on the ways show business chews up and spits out its finest talents, "Judy" sure take pains to make sure it's ready for its closeup. It's a polished affair that thrusts a sobering melancholy up front and center, yet it can't help wooing its target audience of awards season completists and devoted "friends of Dorothy" with the kind of strained uplift that's the opposite one would expect from a production that aims to burrow underneath the stage lights and heavy makeup.

At the center of this fizzle of a Judy Garland biopic lies a busy, mannered and fitfully affecting performance by RenÃ©e Zellweger, the former Miramax Films "it" girl who rose from humble genre movie beginnings to become a household name in the early to mid-2000s. Her screen persona at the time was feisty and spunky, yet with a disarming vulnerability that endeared her to audiences encompassing various demographics. At least before the Oscar winner's career headed south and she opted to step back and take a six-year breather. In other words, she's at the perfect stage to dive into a portrayal of a fortysomething Garland angling for a career resurgence. 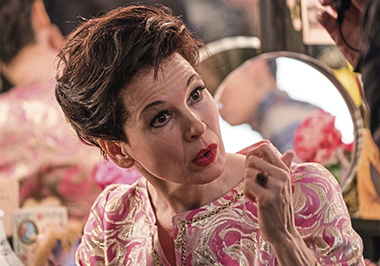 The problem is that Zellweger is navigating the quiet waters of director Rupert Goold's dismayingly staid, musty portrait of a screen and stage icon in her twilight. The film, loosely adapted from Peter Quilter's Tony-nominated play "End of the Rainbow," begins as a reasonably engaging look at the solitude of fame, but somewhere along the way, it morphs into a thoroughly ordinary showbiz soap opera. A competent character study is drowned out by plot contrivances that play fast and loose with historical accuracy, the more effectively to send viewers home humming "Over the Rainbow." That's before considering how well Zellwegger was able to channel Garland's delicate yet potent star quality. We'll get to that.

"Judy" opens with one of several flashbacks showing the budding star (capably played as a teen by Darci Shaw) on the set of "The Wizard of Oz." She's coming face to face with MGM's great and powerful wizard of dreams, Louis B. Mayer (Richard Cordery). The studio mogul is displeased she's acting up and threatening to walk away from a production that's hemorrhaging money, and so what starts as an invigorating pep talk takes on a more sinister dimension. The message is clear: The girl born Frances Ethel Gumm to a family of vaudeville performers is destined to become Hollywood royalty, provided she understands she is now Mayer's property to mold and mistreat as he pleases. 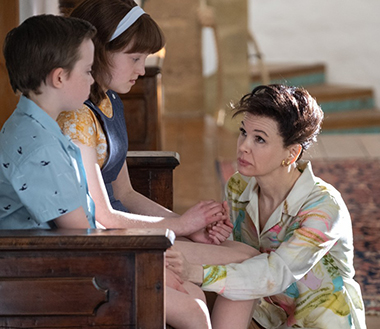 Goold jumps forward to 1968, just after a stateside gig during which Garland trots out Lorna (Bella Ramsey) and Joey (Lewin Lloyd), her children from her tumultuous marriage to showbiz impresario Sidney Luft (Rufus Sewell). At this point Garland and the kids are sleeping in hotels, but after that well runs dry, she takes them to her ex's home. Screenwriter Tom Edge ("The Crown") conveys there's no love lost between Garland and Luft. The latter disapproves of the way she's dragging the children from one venue to another. While a potentially ugly custody fight begins to percolate, Garland reluctantly leaves Lorna and Joey with their father and accepts a five-week run treating London audiences to some of her oldies but goodies at The Talk of the Town nightclub.

It soon becomes clear to both Garland and Rosalyn Wilder (Jessie Buckley), the woman tasked with handling her schedule, but more importantly ensuring the singer shows up on stage, that acclimating to the grind of nightly performances is going to take more than a little getting used to. But the movie suggests there's a committed pro underneath the diva indulgences, and as such, "Judy" is at its strongest when depicting this fragile tug of war between Garland the indefatigable trouper and Garland the addict haunted by her demons. 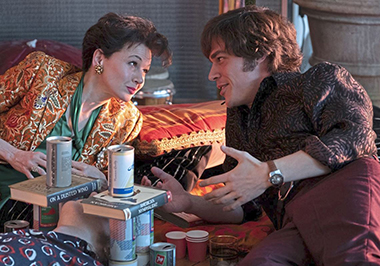 Goold keeps cross-cutting between Garland's struggles in London, which unfold under the disdainful eye of theatrical impresario Bernard Delfont (a largely wasted Michael Gambon), and the nightmarish ordeal she endured at the hands of MGM's handlers who, the filmmakers state, gave the young actress uppers to keep up with her hectic shooting schedule and downers so she could grab a few winks at night. The downfall of America's girl next door happened began in her studio days, Goold and Edge argue, when she traded in a typical childhood to be a cog in a relentless studio system machine.

Focusing on these parallel timelines, reportedly one of many departures from the play, makes sense from a dramatic point of view. And yet, considering the pains Goold has taken to make sure everything about his portrayal of Garland rings true, the near absence of the troubles the star encountered in the decade leading to her 1968 London gig makes the movie's pop psych explanation for the star's decline feel reductive and one-dimensional.

More nuanced, at least in the early going, is Zellweger's performance, which hammers home the toll that decades of hardships and struggles with substance abuse took on Garland's body and voice. The "Bridget Jones's Diary" star changes her voice to a suitable approximation of Garland's formal, vibrating cadences. And yet I couldn't completely lose myself. Her overuse of tics call attention to themselves more than help sustain the illusion that we are seeing Garland, not even when the protagonist briefly assumes fairy godmother/role model duties to a middle-aged gay couple who see in her a fellow social outcast. 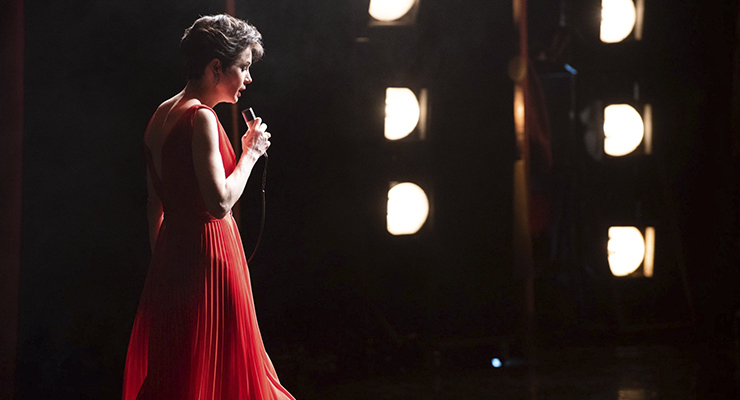 Then there's the singing. In a bold but ill-advised move, Zellweger performs all the songs herself. It's what this critic normally prefers over lip-syncing, but when it comes to capturing one of the most distinctive and recognizable voices of the 20th century, there is little room for error. Granted, the actress is trying to sound like late-period Garland, when her pipes were at her weakest. She still doesn't nail Garland's quivering contralto.

But Goold and Edge ultimately have themselves to blame for turning "Judy" from a study in loneliness and stardom's merciless cycle into a milquetoast telenovela about a dimming star's downward spiral. And nowhere is this more evident than in the way the film brings in entrepreneur Mickey Deans (Finn Wittrock from FX's "The Assassination of Gianni Versace"), the man who would become Garland's fifth husband, to dramatize how she was taken advantage of throughout her life. But even as it fudges the real chronology of their relationship, it all feels bloodless and timid, and that extends to the production values, down to cinematographer Ole Bratt Birkeland's pastel palette. "Judy," in other words, can't be bothered to get its hands dirty. 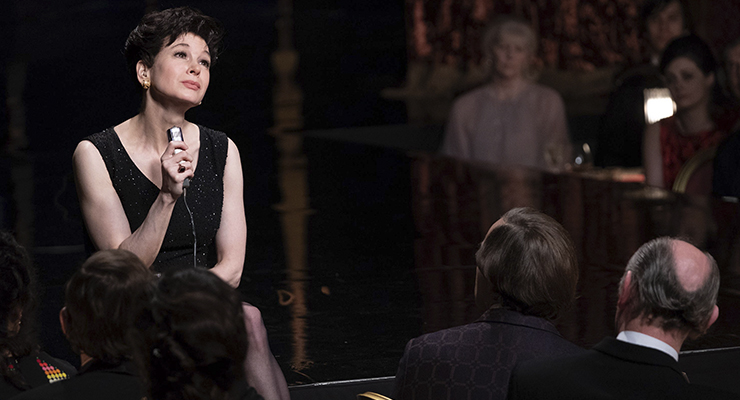 If there's a sense of dÃ©jÃ  vu in how the film approaches its subject, beyond occasionally bringing to mind the (superior) 2001 Judy Davis TV miniseries "Life with Judy Garland: Me and My Shadows," that's because last year's biopic "Stan & Ollie" took a very similar tack in its depiction of the aging Laurel and Hardy's 1953 British tours. Both "Judy" and this film suffer from a doused-in-formaldehyde prestige glaze, but "Stan & Ollie" was able to attain grace notes that largely elude Goold and Edge's tame sudser. It's perfectly respectable, and respectably dull.

The curtain opens for "Judy" in theaters across South Florida, including Regal South Beach, Silverspot Cinema in downtown Miami and The Classic Gateway Theatre in Fort Lauderdale. Its release comes just over a month after the 80th anniversary of the day "The Wizard of Oz" first opened in theaters, on Aug. 25, 1939.