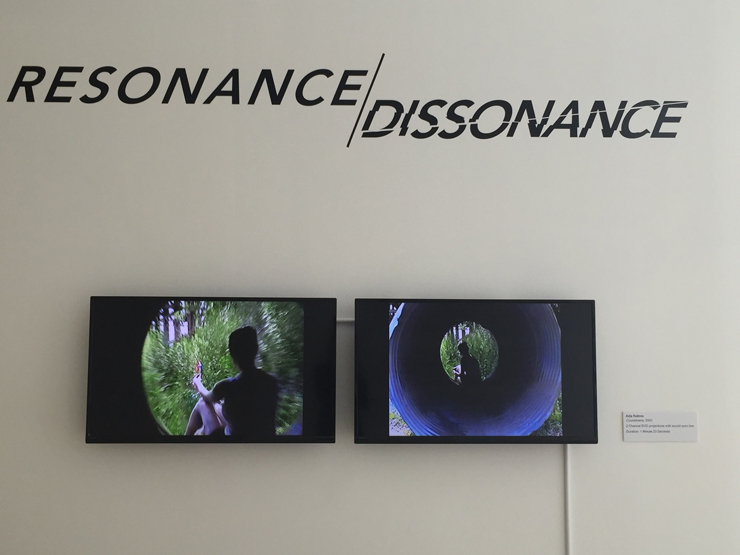 The current exhibition on the second floor of the FIU Frost Museum, Resonance/Dissonance, takes visitors on a visual and auditory ride through a maze of discordant sights and sounds.

Six female artists: Tracey Emin, Aida Ruilova, Quisqueya Henriquez, Sarah Morris, Beatriz Monteavaro, and Susanne M. Winterling created videos with accompanying sonic reverberations. The audio-visual collages viewed on flat screen televisions are like harsh poetry. Filled with symbolic images, the films do not necessarily follow a logical narrative order. Instead, the illustrations are juxtaposed and accompanied with clashing tones to create meaning. The works represent themes like the commercialism of gender roles, alienation in modern cities, and the dichotomy between nature and man. While the images and sounds strike unmelodic chords of female disquiet, they still resonate with viewers because they present underlying universal ideas. 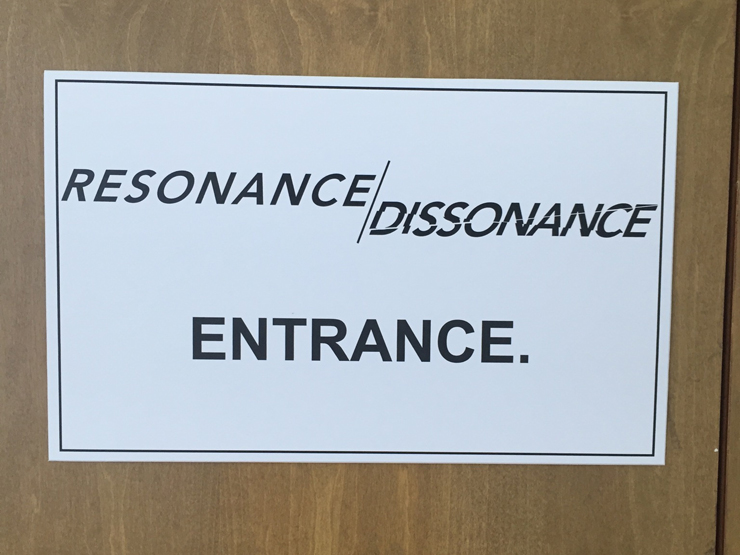 Before entering the main exhibition room, one finds two flat screen televisions exuding inharmonious notes that sound like trains screeching to a halt with whistles blowing in the distance along with gunshots and pin ball machines. Upon closer look, the monitors display 1 minute and 23 second projections with sound sync box titled Countdowns 2003 from Aida Ruilova. An image of a girl in large white underwear standing at a construction site holding a colorful birthday candle in the shape of a number three bursts onto the screen and quickly zooms away. The effect of the disturbing semi-nude image in a gritty man-made place getting farther away and played over and over along with the background noise produces a shocking sensation of imminent danger. 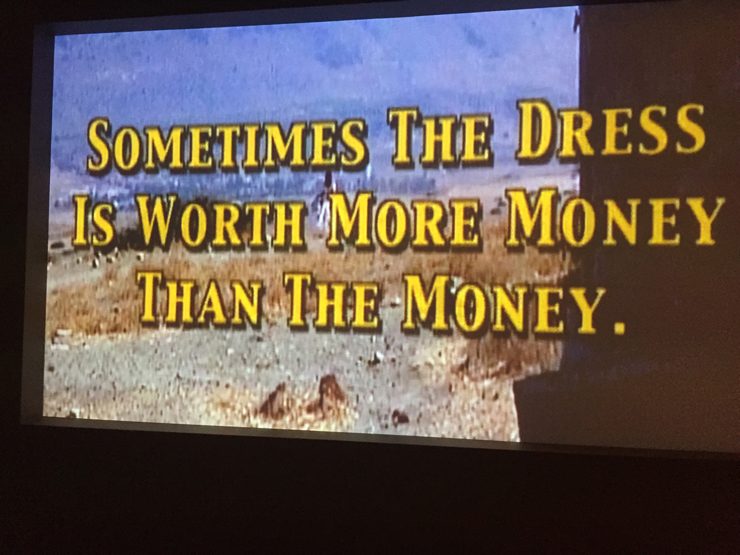 Tracey Emin ,Sometimes the Dress is Worth More Than the Money.

In the main exhibition room, three large film screens project works from Tracey Emin, Sarah Morris, and Quisqueya Henriquez. In Eminâs four-minute film, Sometimes the Dress is Worth More Than the Money 2000/01, a girl in a pink taffeta dress with rose appliques is running through a desert on the outskirts of town while a classic soundtrack from a Western plays in the background. Emin also utilizes the Western theme in the image of the movieâs title: bold yellow letters are spread out across the screen with the epic desert stretching out into the horizon. For the piece, Emin traveled to her fatherâs native, Cyprus.

The video features the artist as a bride wearing a traditional Cyprian wedding dress. In Emin's own words, âAs a childhood fantasy, I saw this wedding dress in the window with some shoes and flowers. I had to make a film about it. The shopkeeper must have thought I was having a shotgun wedding.â As she walks through the desert, the girl finds the decomposing carcass of an animal, roses and bugs on the ground. There are screams echoing in the background and black birds hovering in the sky. There are bills of money pinned onto her dress. She wears fake gold chains and tacky jewelry as she walks frantically away from the town. The images and sounds give one the sensation of a girl who is distraught and trying to run away but only finds death in an arid desert.

Metaphorically, the film expresses the idea of a bride being bought or a young woman for sale that aligns with some of the misogynistic traditions of marriage. Unable to escape from the binds of society, the bride finds she must adapt or find herself alone. In the end, she walks back towards the town, the heroine of her own twisted, inescapable saga.

In Morrisâs Midtown 2009, the theme evoked is the alienation of modern society. Filmed during a single day in New York Cityâs busiest area, the nine minute and 30 second film alternates between close-ups of pedestriansâ legs walking, people sitting by fountains, businesspeople in highrise office cubicles, and many square windows of buildings. Music that sounds like the soundtrack of an action hero sitcom plays in the background. Using architectural angles that depict geometrical shapes, she presents the conformity in big city civilization. The images of people walking down the street mixed with scenes of people sitting for work breaks at fountains expresses the flow of constant movement in the city. The steady traffic of legs along with solitude of workers in thousands of identical cubicles shows the inherent alienation in major modern cities like New York, where millions of people are in close proximity, forced to conform to the rules of society, yet still solitary individuals. No one talks to each other, everyone just keeps moving to the flow, keeping an established order.

The third film in the main room, Intertextualidad (Intertextuality) 2005, from Henriquez, displays a rooster in a parking lot where cars move in an out. Filmed in picture negatives, like Andy Warhol pop art portraits with bright colors that alternate in flashes, she presents the idea of how modern life interferes with nature. The sound of horns honking accompanies the three-minute loop.

A sign in the main exhibition room directs visitors to continue through black curtains into a large theater-style room with a huge projection screen and a bunch of blue bean bags on the floor. One hears a violin being played recklessly out of tune almost as if someone was just hitting it with the wand. A beautiful woman with her hair slicked back in a black shirt with white cuffs is playing the instrument. She seems composed and professional, yet the sounds exuding from her piece are far from neat.

Winterlingâs Untitled (Play Winterling) 2007 explores the illusion of the world as it could be instead of what it is. What one expects is different from what is delivered. While the seven-minute recording is visually appealing, the sounds are almost unbearable and quickly make one want to move onto the next room despite the comfortable seating.

Unfortunately, the pieces in the last room are even more disturbing and dissonant than the others. Four flat screen televisions play Aida Ruilovaâs videos that each last no more than 60 seconds. With headphones attached to the walls, one finds this experience more personal. Yet, upon listening, all that is heard is detached and vacant heavy breathing and muttering phrases. The heaving on the audio along with images of women either lying down or being suspended by machinery on the beach are quite unnerving and frankly unpleasant. A member of experimental noise-rock band Ava, the artist also deploys shrieking guitar strings in these works.

One wonders what she is trying to express and whether these pieces have any meaning at all and are only intended for some visceral shock value. Upon closer look, one might discover meaning in the symbolism of the beach, or if any at all, in the emotion derived. 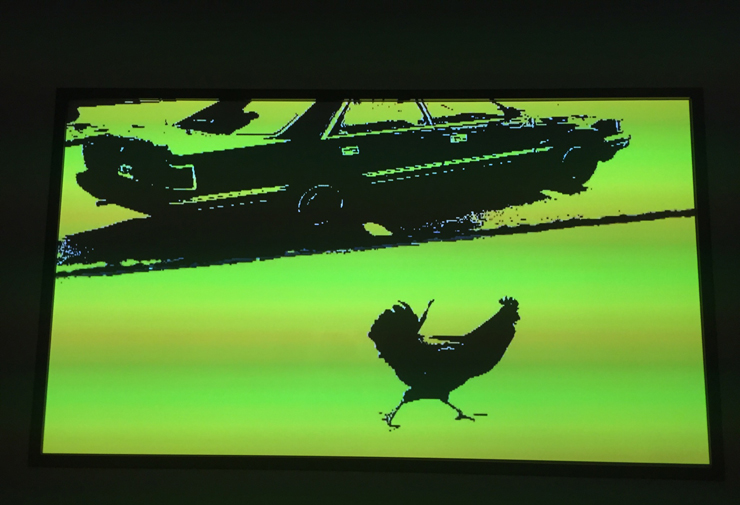 Overall, I would recommend a visit to this exhibit. It is definitely rare and unique with more depth to the imagery than most modern artworks, and the new Frost Museum is worth checking out. But, although there are some pleasantly surprising moments like a movie room full of bean bags, the psychologically stressing noises and disturbing images will send you rushing out the doors wondering what the heck you just saw.