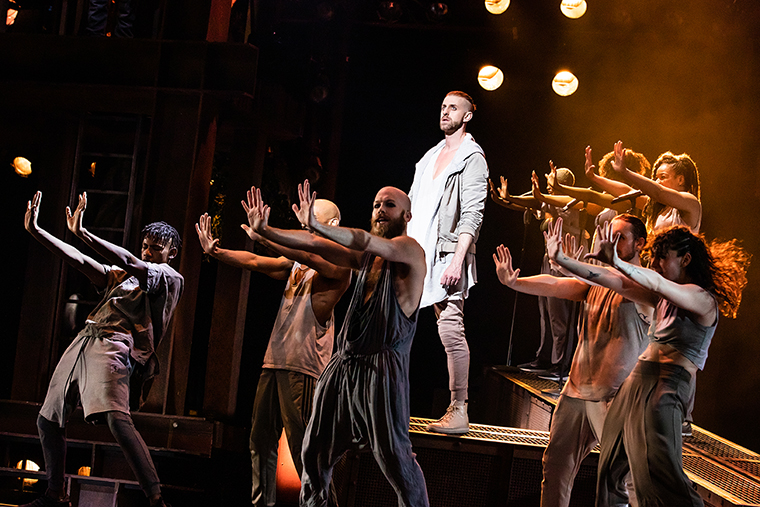 The pair, who would later go on to become one of the most successful duos in musical theater history, couldn't get anyone interested in producing a stage production of "Jesus Christ Superstar."

So, they did it as a double album â a Â concept album, a la the Beatles' Sgt. Pepper's Lonely Hearts Club Band," which was released in 1967. "Jesus Christ Superstar" came three years later. In 1971, the Broadway show did get up and running and opened at the Mark Hellinger Theatre. In 1972, it opened at the Palace Theatre in London.

Here we are in the midst of the 50th Anniversary Tour of "Jesus Christ Superstar" now at the Adrienne Arsht Center for the Performing Arts for a very brief run. It opened May 31 and heads out of town for its next stop with the last show here on Sunday, June 5.

The revival production takes the show back to its rock album roots. Anyone expecting a traditional stage setting with apostles in long robes and a long haired, dark bearded Jesus will be disappointed. 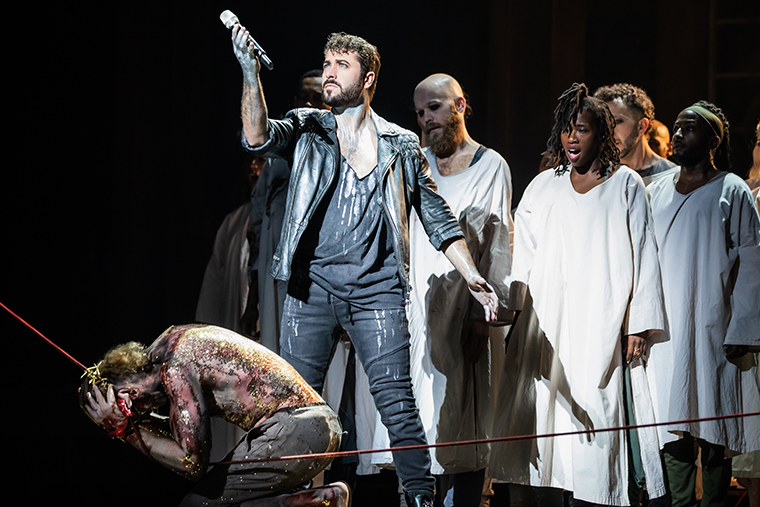 Omar Lopez-Cepero graduated from University of Miami in 2004 is shown with Aaron LaVigne and the company of "Jesus Christ Superstar" at the Arsht Center opening Tuesday, May 31 through Sunday, June 5. (Photo by Matthew Murphy, Evan Zimmerman, MurphyMade)

To be fair, "Jesus Christ Superstar" was never traditional. It's a rock opera about the last week of the Son of God's life. There's the non-traditional part right there.

This contemporary production does send some messages, whether on purpose or as subtle reminders. While the Church has for decades commercialized religion, the rage against the machine type feeling that is pervasive throughout "JSC 50th" seems oh, so perfectly relevant. Relevant now that religion is being used as a political tool, in some senses, from the Supreme Court to women's rights.

The followers just can't get enough of their Superstar, yet sometimes more blinded by the shiny objects â in this case, the LED lit crucifixes â than their savior.Â

Tom Scutt's industrial set underscores a world that feels post-apocalyptic where there is no time. No B.C., no A.D., no century. Scutt's costumes follow suit, too, almost yoga-esque in their design with Jesus and some of the band members in hoodies. 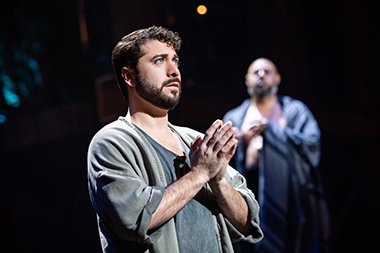 The palette is neutral.

All of this is meant to bring the music front and center, which is why director Timothy Sheader keeps the production lean. So, when something really electric hits the stage, it's time to really sit up and take notice.Â

Two particular scenes that stand out are "Herod's Song," which is delivered by Paul Louis Lessard in a gold-lamÃ© jacket and channeling a cross between Adam Lambert, Tim Curry in "Rocky Horror Picture Show" and Elton John. Then there is the "39 Lashes," where the ensemble tosses gold glitter at Aaron LaVigne as Jesus. No whip here.

Alvin Crawford, whose booming bass voice is haunting as scheming priest Caiaphas, is high atop the proceedings using a clapper, a percussion instrument made of wood that creates aÂ  cracking sound.

LaVigne plays Jesus with a hipster-grunge rock star vibe. Webber and Rice have no mercy on the acrobatics they hoist upon anyone who sings the role and LaVigne is up to the challenge. 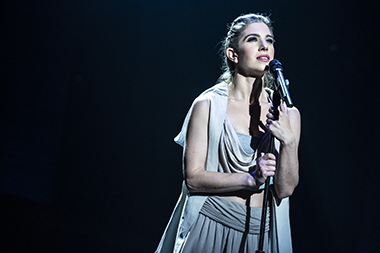 Jenna Rubaii graduated from University of Miami in 2012. She comes back to Miami in the North American tour of "Jesus Christ Superstar" at the Arsht Center opening Tuesday, May 21 through Sunday, June 5. (Photo by Matthew Murphy, Evan Zimmerman, MurphyMade)

University of Miami grad Omar Lopez-Cepero is Judas, who gets more of a starring role in "Superstar" than the Big Guy himself, but while there's no doubt Lopez-Cepero can sing burning rock tunes with the best of them, he misses the opportunity to rise to the acting occasion and bring any depth of character to the history's most infamous traitor.

While there may be a place for the folksy vibe that Jenna Rubaii has as Mary Magdalene, and no fault of hers but it's in the casting, the iconic "I Don't Know How To Love Him" lacks the feeling of longing.

What's most satisfying in "Superstar" is Drew McOnie's choreography and the hard-working dance ensemble that is totally in sync. Then there's the kick-butt orchestra that's perched high up on stage on two sides instead of in the pit. Mike Frederick looking like the Grim Reaper is bathed in a spotlight as he plays searing guitar licks on the rock band side. On the other side are the woodwinds and horns that bring the brilliant orchestrations of the Lloyd Webber-Rice musical to light.

There's originality in this "Superstar" and plenty packed into 90 minutes. It just takes some getting used to if you're expecting the usual Broadway-esque stage show.Â

The current national touring production of "Jesus Christ Superstar" will play the Adrienne Arsht Center for the Performing Arts of Miami-Dade County from May 31-June 4. Ticket prices range from $35-$130. Audience members must wear masks while seated in the theater. To buy tickets, go toÂ www.arshtcenter.org/tickets/2021-2022/broadway-in-miami/jesus-christ-superstar/#tickets.