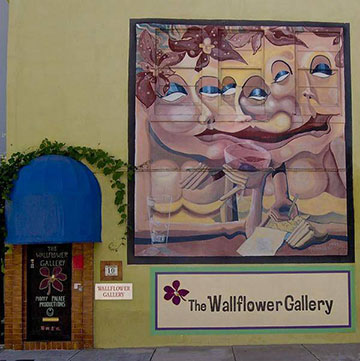 Original location of the gallery with Anibal Fernandez's artwork

The mature, platinum blonde Argentine walked onto the stage. No, this isn't a set up for a joke, it was like something out of another era. She was decked-out in black stockings, a black faux leather skirt, shirt, gloves, and hat, a getup reminiscent of a love-child between Michael Jackson and Joni Mitchell, She took the mic. In her rockin' outfit, she hypnotized the audience with her strong, deep melodic voice as she vibed to the harmony of the band. With a celebratory spirit, she worked the crowd using her voice and her movements. She shook her skirt from side to side and turned around waving her hands in the air. It's rare to see an older woman command the main stage at Churchill's Pub, usually more of a draw for testosterone, and usually invaded by some barely out of high school boys with rock star dreams.

In all fairness, skilled musicians perform at the establishment every day, which is one reason it has been open for over 35 years. Not only do musicians (yes, predominantly men) display their talents, but many other types artists also do. Poets (the legislators of the world), dancers, painters and even fire spinners have all graced one of the two stages at the pub. And itâs not just art that is welcome. Activism, community organizing and benefits for various causes are also nurtured at the locale, now decorated with Mt. Punkmore, one of the newest murals. This menagerie of art and culture made the CBGB of the South the perfect place to transform into The Wallflower Gallery for the now closed venueâs 20th anniversary party. 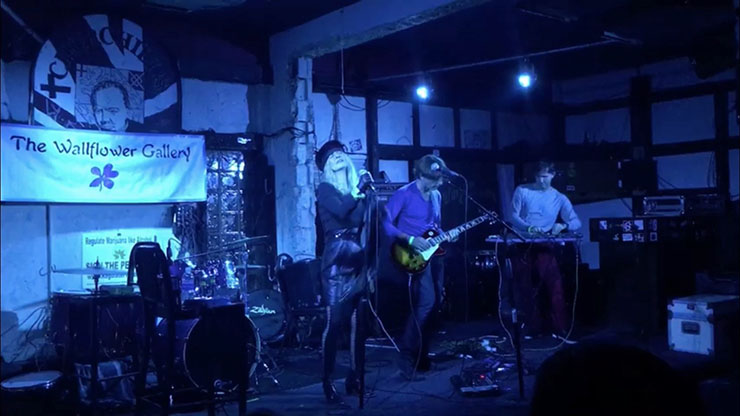 The Wallflower Gallery was a little spot in the heart of downtown Miami that was active in the late 1980s and 1990s. It was part art gallery, part coffee shop with poetry open mic readings, part meeting spot for the free thinkers, and part music venue. There were couches, art all over the wall, with someone getting inspired and someone creating.

At the Wallflower Galleryâs 20th Anniversary Party on May 13, the live music venue was full of young old faces, many veterans of the Miami music and arts scene. They all came out to commemorate one of the first places to nurture experimental musicians and artists in the city, before Wynwood, as we now know it, even existed in anyoneâs imagination. 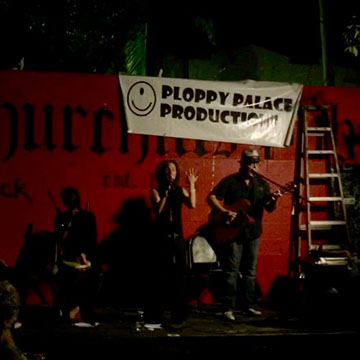 The founder of the multi-entertainment venue, Flash, referred to the party as a "family reunion." Many of the artists who got their start at Wallflower came out to Churchill's Pub to commemorate him and his contribution to the local arts and culture scene at the day long event. For instance, Smurphio from Afrobeta came to perform at the end of the evening when the older crowd left and a few younger folks remained. He said he got his start at The Wallflower Gallery before he even met his better half, his wife and partner in song, Cuci, with whom he later formed the popular electronic music duo. They performed earlier that evening at another event. He recalls Wallflower to be an awesome, exciting, and nurturing environment for creativity.

The Biscayne Poet Oscar Fuentes read his poem "Biscayne" accompanied with a band. He was also one of the many literary inclined who started to perform his spoken word anthems at the spot.

Ana Karna sang an acoustic in a beautiful healing voice called "Behind These Eyes" at the back stage. The song was her vegetarian anthem about what animals go through in factory farms. She is another rocking mature woman who performed with fifty other acts during the day long event. There were too many great acts to name them all. 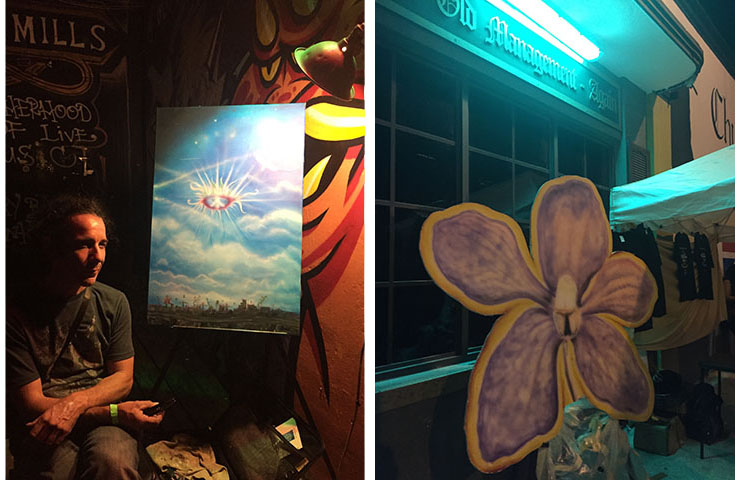 Anibal Fernandez, who painted the original floral artwork on the doors of the gallery, was in the back porch live painting. His psychedelic painting of a sky with an otherworldly creature coming down like UFO on an apocalyptic city of art and music spoke of a Miami of the future when climate change and sea level rise have displayed their effects.

In addition to the performers and artists, activists and community organizers also attended. The activist group Emerge Miami, who has been active since the 1990s, also got their start at Flash's venue. A few members came out and set up a booth. They also had a Flash drawing contest.