So You Think You Know About Climate Change?

Test Your Knowledge at a Live, Mermaid-Hosted Quiz Show 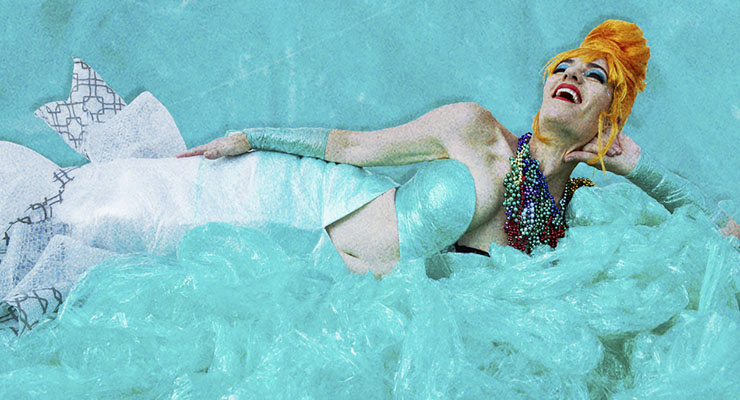 Elizabeth Doud as Siren Jones in the quiz show, photo by Gavin Bacon.

Do you know how to distinguish an indigenous species from an exotic? Or what comprises an invasive native? Or whatâs best to pack for the apocalypse? If not, donât worry, youâll still have a good time playing this quiz show presided over by Siren Jones, a personable mermaid.

Siren, as rendered by performance artist Elizabeth Doud, will preside over the premiere of âMermaid Truth or Consequences: A Biodiversity Game Show,â which will be presented Saturday night at theÂ On Stage Black Box Theatre at Miami-Dade County Auditorium.

At performance art "game show," audience participants will be asked questions that test their knowledge of such topics as biodiversity on both plant and animal species, as well as the impact of such movements such as colonization and industrialization on the human species. 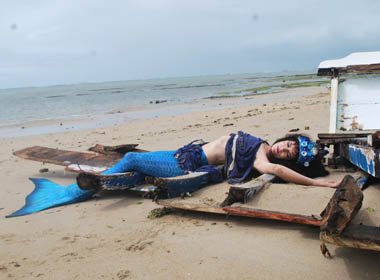 Elizabeth Doud as Siren Jones in a previous show.

The show is presented by Climakaze Miami, a co-creation of Doudâs Siren Arts and FUNDarte to serve as a platform for performance and dialogue about climate change, environmental justice, and the sustainable future in Florida and beyond.

âWe believe that what we call eco-performance today will soon be called performance, as there will be no aspect of our reality that is not affected by climate change and its impacts,â says Ever Chavez, executive director of FUNDarte, a non-profit organization based in Miami Beach. Through arts and storytelling such as this event, the nonprofit aims to âcreate awareness, action and greater empathy for humans and other species for an eco-just future,â he added.

Doud created Siren Jones about 10 years ago, as a way of infusing creativity into the topic of climate change. âI had been working as a performance artist for about 20 years, and I was seeking ways to make the topic of climate change beautiful and moving, and less like a lecture. So thatâs when I came up with Siren Jones. After all, who better to talk about these topics other than a mermaid, â says Jones. 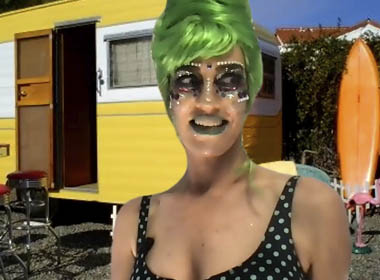 âSheâs a big delusional âafter all, she is a mermaid, but then again, thatâs the contrivance. She lives in a mermaid universe, so I established rules for that as well,â says Doud.

She also created a complex back story for Jones. âShe used to be a hard core activist, but then she decided she was tired and all she wanted was glamor, so she took a contract with a TV station. Sheâs really cheesy, but she also hits the notes of hard-hitting politics, and yet she sold out to a big corporation and now sheâs going for it as a talk show host,â says Doud.

She also crafted âMermaid Truth or Consequences,â as a fast-moving, entertaining combination quiz show and talk show, which features a wheel for spinning, a Jenga-like audience participation feature, as well as a procession of special guests, who will drop by to be interviewed. They include Ponce de Leon (one of the forefathers of resource extraction industry), the bestselling author and Forecaster Dra. Dolores del Mundo, along with a few endangered creatures, Doud notes. 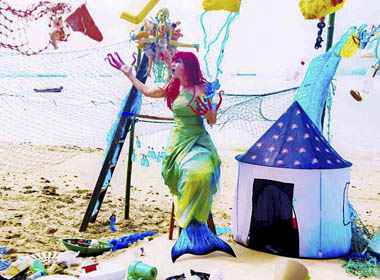 âWe wanted to be punchy, funny, and sarcastic as a way of focusing on the topic in a lot of different ways, but we also wanted to poke fun of current events as well, and bring in also how Florida is a crossroads of different cultures and different people,â Doud says.

Doud created Siren Jones several years ago, and she has used her in other, smaller programs, including one on Miami Beach called âThe Mermaid Tear Factory.â But Saturday nightâs show is Doudâs first full-scale program featuring the mermaid. She wrote the show in 2018, and then successfully raised the funds for the performance raised the funds through a $30,000 Knight Foundation matching grant. It was scheduled for May 2020, but postponed due to the pandemic. 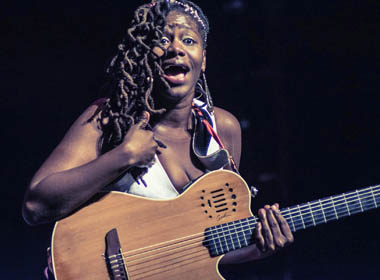 Doud did not want to give away too much from the show, but she did note that joining her on stage will be singer/songwriter Inez Barlatier, and there will be a few special guests as well. Bartlatier, a Miami native, is a Haitian-American multidisciplinary artist who has been performing since the age of 12, and is a singer-songwriter, folkloric dancer, actress & hand drum percussionist/instructor. She has performed throughout the U.S., as well as in Haiti, El Salvador, Honduras, Nicaragua, and Cuba.

Galen Treuer, Miami-Dadeâs resilience director coordinator for strategic outcomes, will be on hand for a talk-back session on the topics raised during the performance.

The audience for the show will be limited to 50, with COVID-19 safety precautions including mask wearing, enforced.

âMermaid Truth or Consequences: A Biodiversity Game Show,â will be performed Saturday, Aug. 21 at 8 p.m. at the On Stage Black Box Theatre at Miami-Dade County Auditorium, 2901 West Flagler Street, Miami. Tickets cost $20, and $15 for students and seniors with ID. Ticketmaster at www.ticketmaster.com; by phone (800) 745-3000 and at the Miami-Dade County Auditorium Box Office, Monday through Friday from 9 a.m. â 4 p.m., call (305) 547-5414 for more info. Seating limited to 50 with COVID-19 precautions, including masks, in effect.