'Art Of Balance' at Fairchild Extended

Finding balance in life is definitely an art. Equilibrium is beauty. The concept of stability is explored in the latest exhibit at the Fairchild Tropical Botanic Garden. Between the high branches of lush tropical trees at the enchanting 83-acre tropical retreat, chrome cast bronze figures are suspended in the air like acrobats on tight ropes.Through precise physical equilibrium, the artist creates an aesthetically pleasing integration of elements. Inspired by those who maneuver their bodies using apparatuses to acquire balance, the artist creates an exhibition that propels the human spirit higher. 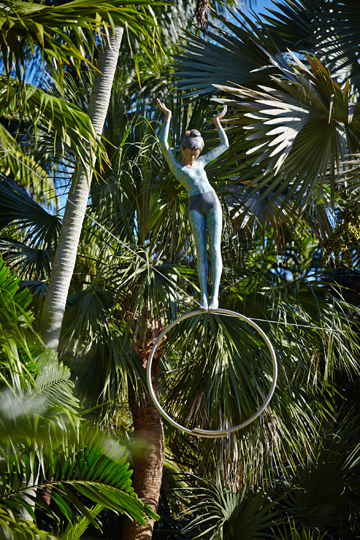 The Art of Balance by Polish sculptor Jerzy Kedziora is the latest installation of Art at Fairchild, a seasonal program that invites international artists to display their works throughout the vast garden. There is girl balancing herself on top of a hoop that is looped through a rope. Titled "Picasso's Girl," it is a an adaptation of one of Picasso's paintings "Acrobat on a Ball "(1905).

"The Gymnast with a Ribbon" is the first figure from a series of young girls flipping and jumping on a tight rope using props like ribbons, balls or an open-frame cube. "Tightrope Walker" shows a female acrobat walking the tightrope and maintaining a difficult pose balanced on a contracted leg.

Overall there are nine sculptures on view. Originally set to close at the end of March, the Fairchild announced it was extended the exhibition through April 30.

Artist Kedziora grew up in Poland during the aftermath of World War II. He witnessed the rise of the Solidarity Movement. He and his fellow citizens felt as though they were walking a tight rope, trying to balance on a wire amidst the destruction and diffidence around him. He felt as though he was being pulled in different directions due to the conflicting forces of the time: ties to traditional Europe and domination by Eastern Bloc.

The Fairchild Tropical Botanic Garden is a true oasis in South Miami and "The Art of Balance" makes it an extra magical experience. Aside from the lovely sculptures, visitors can also check out the gorgeous orchids and whimsical butterflies. Consider a membership, as you'll want to return time and time again.

Garden entry is $25 for adults, $18 for seniors 65 and up, $12 for children 6-17, and free for Fairchild members and children 5 and under. Fairchild Tropical Botanic Garden is located at 10901 Old Cutler Road, Coral Gables, FL 33156. For more info, visit www.fairchildgarden.org.