Lights up on âThe Humansâ at GableStage and the technically slick writing by Stephen Karam engrosses immediately. And then the slickness quietly moves into the brilliance of Karam's insight into the passing of time, culminating in a climax that's as explosive as it's unexpected. 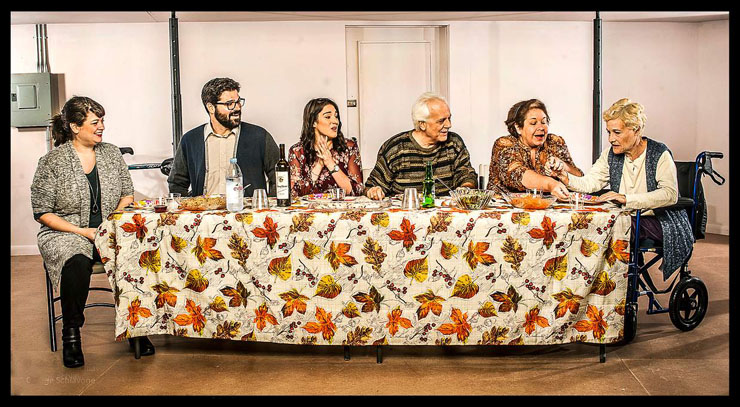 Erik and Diedre Blake, sixtyish, have come to NYC to celebrate Thanksgiving in their daughter Brigid's new ground floor/basement apartment in Chinatown. She shares it with her partner, Richard. The Blakes' other daughter, Aimee, joins them. As does Momo, dementia riddled, wheel chair bound, and the millstone around Diedre's life.

Elizabeth Dimon is the tortured, Virgin Mary statue toting Diedre. She loves her daughters and hates their life choices: Brigid living in sin and Aimee a lesbian. She abides her husband, Erik. She strives to be a good woman. She cleans Momo after their frequent bathroom visits. And Dimon is resentfully perfect. Just watch her face.

Michael Gioia, as the smiling Erik is outstanding as the loving family man, fixated on 9/11, 28 years a school maintenance man, deriding the new apartment, resenting the rich, drinking the beer, fawning over Momo. 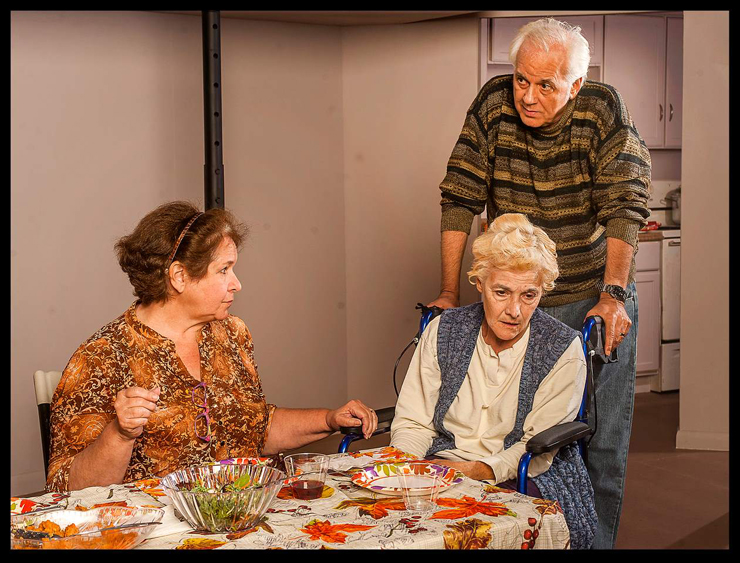 Carol Caselle's Momo is a disturbing foresight of old age for many. Her frustrations and lapses from "good days" into the rages are frighteningly real. Her few moments of lucidity are precious.

Meridith Bartmon disappears completely into her role as Aimee, the overly generous daughter with more than enough problems for any lesbian lawyer.

Alex Alvarez is boyfriend Richard, 38, and studying, proud of his mental stability, seeking approval from Brigid's family, failing with Erik.

And Diana Garle is Brigid, failed musician, critical of her mother, confessing that Richard makes lists, and constantly apologizing for the Chinese treading heavily in the apartment above.

Perhaps not a typical family at their Thanksgiving feast, the Blakes have their rituals and their songs, their little jokes at each others' expense with eventually the humor turning to vituperative niggling. The facades are dropped and the brilliance of the acting, the directing and the writing become almost overwhelming. Another triumph for director Joseph Adler and GableStage.

Lyle Baskin designed the all white two level set, with its iron, spiral stair case from the basement to the ground floor, which holds the constantly in-use bathroom. There is a bedroom with a barred window overlooking an alley. Lighting by Jeff Quinn and sound/music by Matt Corey. Ellis Tillman designed the costumes and Beth Fath the props.