The Pack at the Center of 'The Wolves' At Zoetic Stage 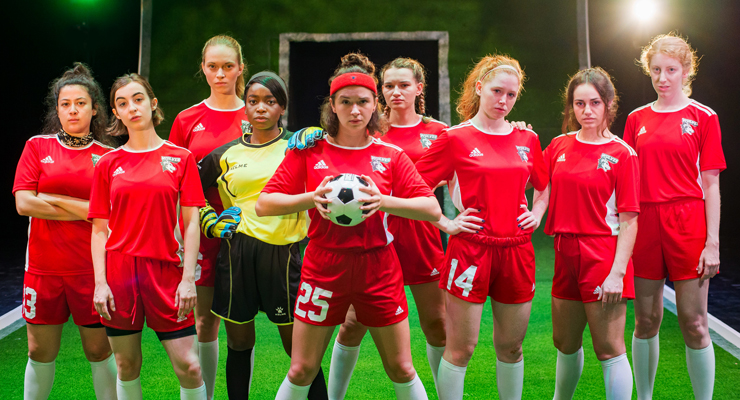 In Sarah DeLappe's Pulitzer-nominated play, her characters are numbered, not named. It is according to the position they play on a high school girls' indoor soccer team and the jersey number they wear that identifies them. Now at The Carnival Studio Theater at the Adrienne Arsht Center, produced by Zoetic Stage and directed by Stuart Meltzer, the nameless numbers don't matter, because each character has a distinct personality.

Lisa Naso stars as No. 2, the Queen of Concussions, whose crash helmet gets replaced with bigger headgear protection in every scene. There are also hints that she suffers from an eating disorder. She's the innocent of the group, a member of her Episcopalian church's youth group, with a limited world view. She is not allowed a cellphone, and there is no television in her home. She's the sheltered one and the do-gooder of the team.

The New-York based actress, along with director Meltzer, talks about the portrait of nine American girls who share their exploration of the meaning of life in the play "The Wolves." 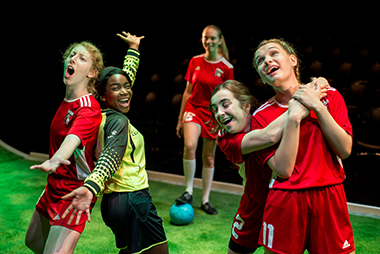 "The young women on stage are seen in this play in a way they are rarely portrayed," says Naso. "This play covers a lot of ground in a short amount of time. Each character sort of deals with a different aspect of being a teenager. The play explores competition, friendship, failure, privilege, loss, self-image. We see these girls growing up and becoming more aware of the world around them over the course of six weeks." 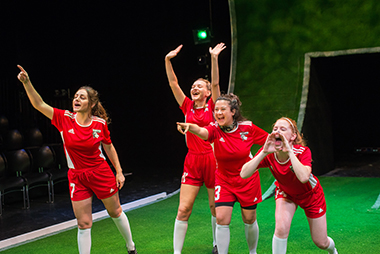 Meltzer selected the play for the Theater Up Close series for Zoetic because he was taken by the play's ability to give audiences more than a glimpse into the complicated and complex psyches of the characters..

"The audience will be taken on a beautiful and insightful journey that will feel immersive, thrilling, funny and heartbreaking," says Meltzer.

Naso adds: "I think this play is so special because it shows young women on stage in a way they are rarely seen - as independent beings, as ambitious and capable. They aren't afraid to challenge each other, or to be silly and make each other laugh."

Naso's castmates are Laura Plyler as team captain No. 25, Caitlyn Meagher as No. 46 and the home-schooled newcomer in the squad, Katherine Burns on defense as No. 8, Paloma Leite as midfielder No. 13, Rachel O'Hara, as midfielder No. 14, Tuesline Jean-Baptiste as goalie No. 00, Harley DelCogliano as No. 7, the striker of the group, Cynthia Bonacum as No. 11, a midfielder, and Elena Maria Garcia as "Soccer Mom." 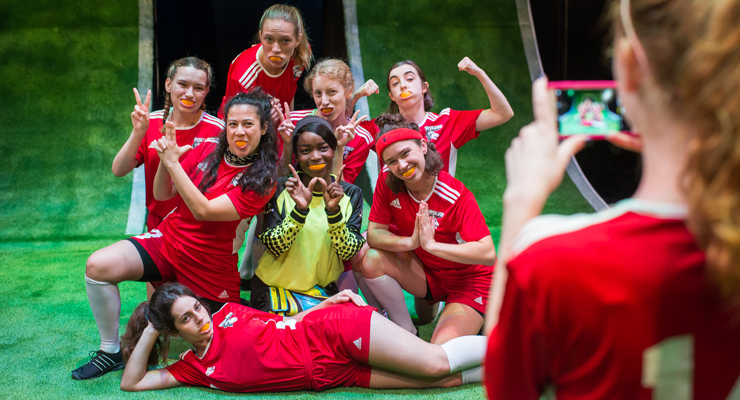 The cast is a mix of Miami and New York actresses, and all except the Soccer Mom are to be high-school teenagers, 16 and 17 year olds. How did Meltzer find that specific of a group in his casting?

"These are all professional actresses who came out to audition for our season. We are lucky that Miami has such a diverse community of young actors for us to choose from."

Naso, originally from Northpoint, Long Island, N.Y., says the play had her contemplating what her high school experience was like.

"It's the kind of show I wish I'd seen when I was younger. It is about finding your place in a pack, and in a larger sense, in the world. This play feels really personal because it speaks so true to an actual high school experience, all the drama and uncertainty of trying to figure out who you are. And how funny that can be."

"The Wolves" from Zoetic Stage is part of the Theater Up Close series performs through Nov. 17 in the Carnival Studio Theater at the Arsht Center's Ziff Ballet Opera House, 1300 Biscayne Boulevard, Miami.