The Whale at GableStage, Superbly Done

The lights come up at GableStage and thereâs a gargantuan toad like creature sprawled on the dilapidated downstage sofa. Heâs Charlie, 600 pounds of guile, orchestrating his own death. Gregg Weiner is Charlie in a performance thatâs amongst his very best. And thatâs saying a lot, for Weiner never stops; show to show he excels, no matter the character. 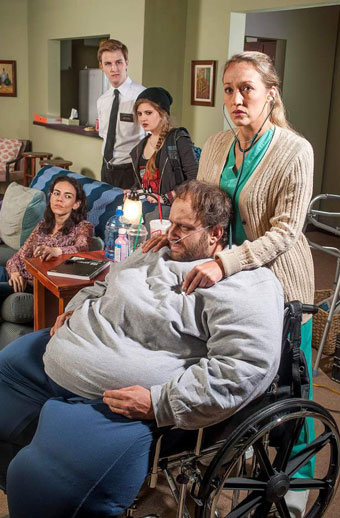 As Charlie, Weiner is an endlessly apologizing gay, guilt ridden father, ponderously eating, sweating and manipulating. Heâs The Whale or maybe not, for this one act by Samuel D. Hunter, covering five days in Charlieâs life, is a trove of allusions, connections and fascination.

Director Joe Adler has surrounded Weiner with a cast, Amy Miller Brennan, Arielle Hoffman, Deborah Sherman and Kyle Skyler Urban, that under Adlerâs direction, gives an evening of theater to be treasured. And youâll certainly remember it.

With her powerful performance Amy Miller Brennan brings the conflicted Liz, the ultimate enabler with a drive to keep Charlie alive while killing him with food. She urges his hospitalization, warning his death from gluttony is imminent. She screams in frustration, cursing his obstinance in refusing medical care. She is loyal. And she pays for it. 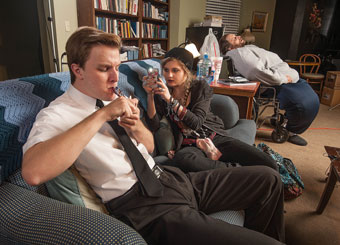 Elder Thomas, played by Karl Skyler Urban (an easy name to remember and thatâs a good thing), nineteen years old and on his first mission for the Church of Jesus Christ of Latter Day Saints drops in on Charlie. He offers simple, upright succour from the Mormon faith and Charlie listens but not Liz, a lapsed Mormon herself.

Charlie has not seen his daughter, Ellie since she was two. He convinces her to visit him. Sheâs a mean seventeen with pockets full of venom. Arielle Hoffman is Ellie, sulkily scary as the malevolent teenager who hates the world and all within. Especially her father and Mary, her mother, played by Deborah Sherman.

Sherman, as the manic Mary, is a whirlwind of hate and rage and unexpected tenderness, the perfect portrait of one abandoned.

If thereâs such a thing as a tragedy that leaves you feeling fine then GableStage has it.