Two-Character Play 'Fade' at GableStage Is Insightful, Moving and a Beacon of Truth 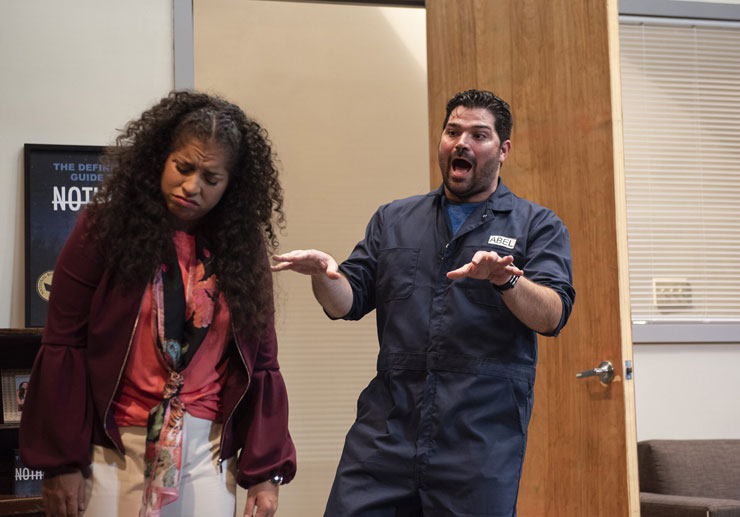 Alexandra Acosta's Lucia and Alex Alvarez's Abel in Tanya Saracho's âFadeâ at GableStage in Coral Gables are caught up in a tense moment. (Photo courtesy of Magnus Stark)

The following scenario would be funny if it werenât so sadly reflective of todayâs climate of intolerance and division.

Each morning, a well-off white man with a powerful position at work demands that his Hispanic housekeeper lay out his periodicals in a very specific manner. One day, she fails to do exactly as he asks. And, so, the higher-up insists that his only Hispanic employee explain to his maid, over the phone and in Spanish, how she must arrange his periodicals just so each and every morning. In fact, the executive has no use for the employee beyond such requests. Actually, he only employed her to meet a minority hiring quota. 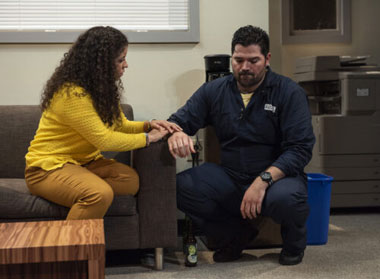 Alexandra Acosta is Lucia and Alex Alvarez is Abel in Tanya Saracho's âFadeâ at GableStage in Coral Gables through Sept. 18. (Photo courtesy of Magnus Stark)

Then we meet Lucia, one of the central characters in "Fade." She feels useless at her television writing job, which she hates. After all, almost nobody talks to her. Furthermore, Lucia, a Mexican-American, is practically the only worker at the studio who is a member of a minority group. As a result, she fades to the point that you hardly know she is there.

Fortunately, for Lucia, there is at least one other Hispanic worker at the studio â a janitor named Abel, also Mexican-American. Eventually, the pair warm up to each other. The two share stories about their lives, and Abel proves to be the one person whom Lucia can talk to at work. However, in "Fade," a layered play about class, power, status, heritage, identity, ambition, loyalty, trust, betrayal, and assumption, trust and loyalty only go so far. 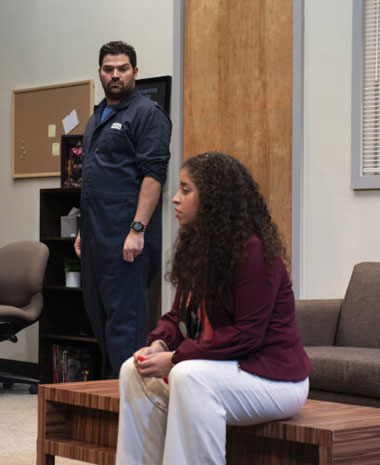 Saracho packs a lot into her taut, timely two-hander that lasts just under two hours with no intermission. Even so, this is a focused play. It reminds us that, in the end, a personâs status does not change who they are at their core.

"Fade" also reminds us that making assumptions is rarely a good practice. Indeed, from the beginning, Saracho advises us against doing so. For instance, Lucia says people wrongly pronounce her name as Lu-sha. Rather, it is Loo-see-ah. Opposite Lucia, Abel says âAbleâ is a wrong pronunciation of his name. Rather, it is Ah-bell, with the emphasis on âbell.â

While Lucia and Abel are the only two characters whom we hear and see, there are offstage characters. They include Gary, an employee at the TV studio. He reminds Lucia that the only reason their boss, John, hired her, too, was to meet a minority hiring quota.

We learn that Gary acts nasty toward Lucia. And, neither John, nor her other co-workers, are much better to her. In fact, except for Abel, Lucia is alone not just at her work, but in Los Angeles. It is the playâs setting, and the city to which Lucia moved from Chicago after struggling for years to write her second novel.

While you want to sympathize with Lucia, the playwright makes that difficult. In particular, she can come across as overly tenacious, assertive, and hysterical. In addition, she proves to be a manipulator. But just as you are about to dismiss Lucia as unlikable, she demonstrates feelings for others. Meanwhile, at first, Abel seems guarded, aloof, and blunt. But as the play progresses, Saracho peels away layers from Abel to reveal a compassionate and passionate man with an honorable, yet painful past. 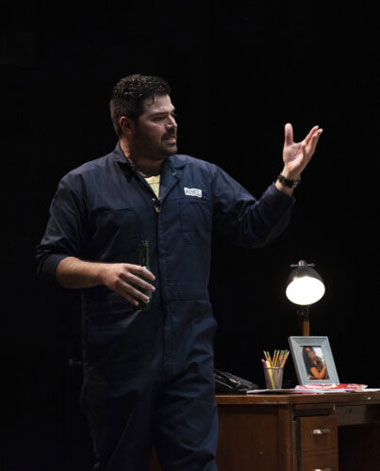 Alex Alvarez is Abel, a janitor who befriends a TV writer, in Tanya Saracho's âFade.â (Photo courtesy of Magnus Stark)

Through spare, yet vivid writing, Saracho brings the characters to full life. Also, the writer, shows a knack for painting clear mental pictures with her descriptive words. In addition, Saracho deftly balances the playâs seriousness and humor.

"Fade" is an episodic play that covers a long period of time. To help indicate the time passing, the piece calls for many costume changes (Camilla Haith designed the costumes). Kudos to the backstage crew for helping with the quick changes, making it all seem seamless.

While each outfit sports different colors, all are tasteful and appealing. They reinforce Luciaâs ambition and care with which she performs her job. Meanwhile, Abel wears the same outfit to work each day. We might infer it is his required uniform (he must wash it often).

In the script, Saracho describes the setting as âan office in a film studio. One of those generic itinerant writerâs offices in the writersâ building where coat after coat of paint covers up years of nail holes and career disappointment.â Scenic designer Frank J. Oliva has created a plain, clean, realistic set with appropriate details such as posters for films. The set is compact, perhaps reinforcing any claustrophobia that Lucia might feel while at work, as she hates working there. That is, until things change for the better for Lucia.

Oliva also designed realistic lighting for the production, which Teo Castellanos sensitively directs with an attention to detail. 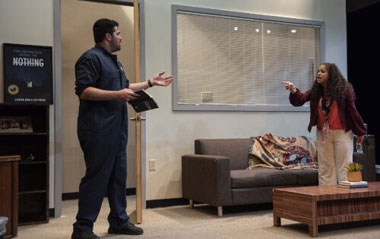 Alexandra Acosta as Lucia a TV writer and Alex Alvarez as Abel the janitor in Tanya Saracho's âFadeâ at GableStage in Coral Gables through Sept. 18. (Photo courtesy of Magnus Stark)

Opposite Acosta, as Abel, Alex Alvarez undergoes a convincing transition from guarded, aloof, and blunt to compassionate, intense, and more open. With dark eyes, dark hair, and expressive eyebrows, Alvarez imbues Abel with touching compassion and intense passion. However, Abel is more understated than Lucia, and Alvarez plays him with enough restraint. This is the case even during his Abelâs more passionate moments.

This playâs ending is hardly tidy or happy, the kind of conclusion we encounter in some romantic comedies and fairytales. Indeed, this is real life, which can be unsettling and uncertain. "Fadeâs"ending reflects that. It reminds us that as far as we have come in our fight for equal rights and recognition for all, much work remains. 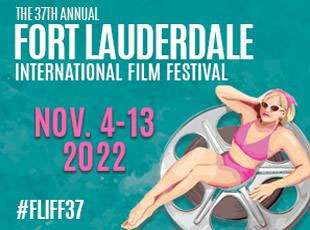