Universal Appeal of 'GringoLandia' Makes It a Show For Everyone 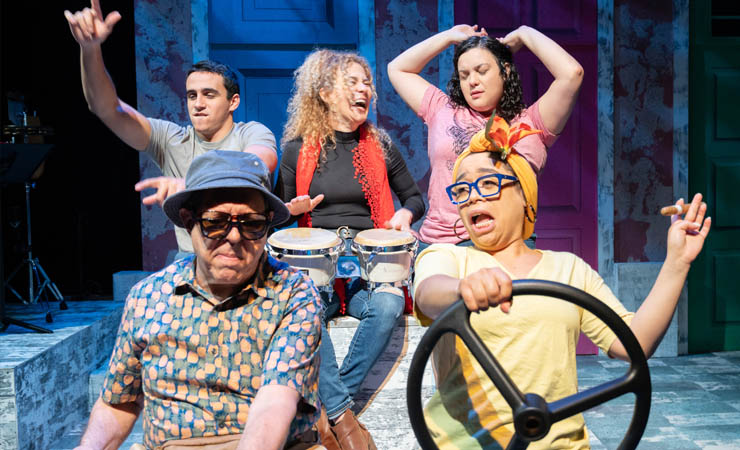 If you have a funny bone and are a member of a family, chances are you will value Hannah Benitezâs relatable, hilarious, eye-opening new play with music, "GringoLandia." Certainly, you do not have to know Spanish or be well-versed in politics pertaining to Cuba to appreciate the piece.

Zoetic Stage, the resident theater company inside the Adrienne Arsht Center, is giving "GringoLandia" a polished world premiere production. It runs through Jan. 30 in the companyâs intimate playing space, the Carnival Studio Theatre. 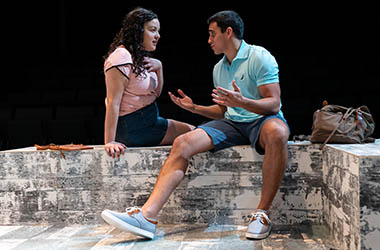 The play's title is a term that Latin Americans sometimes use to refer to the United States and Americana. But "GringoLandia," which Benitez sets in Cuba in 2017, is not a political piece or a history lesson. Rather, it is ultimately a play about a Cuban-American family from Miami trying to reclaim a piece from their past.

Benitezâs taut, intense play lasts less than two hours. Still, it covers a lot of territory without seeming overstuffed. Namely, the piece, which is not preachy, touches on heritage, generational differences, gender, family, the collision of two cultures, race, sex tourism, and the importance of accepting the past in order to move into the future.

The playwright, a Miami native, resident, and Cuban-American, has said that the Cuban government tries to make the country look appealing to tourists. In the process, they hide ugly truths such as poverty and prostitution. However, in her play, Benitez said she presents the "Real Cuba." 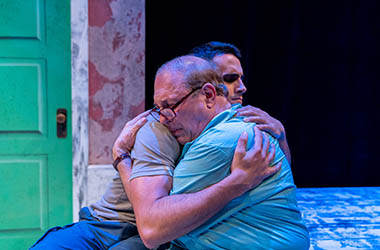 One impressive thing about "GringoLandia" is that Benitez exposes the ugliness without diving into depression. Quite the contrary, the play is lighthearted without making light of Cuba, its people, and the island nation's problems.

The sources of humor include one-liners as well as uncomfortable, even embarrassing situations. Also, audiences will surely related to someone or something in the play that reminds them of their own lives.

Director Stuart Meltzer said during a pre-curtain announcement that "GringoLandia" is a âMiami play.â No doubt, if you are from Miami, you will probably nod your head and laugh at least once.

For instance, âIâm never complaining about Miami traffic ever again,â one character says.

Then, there is a moment when a character is reading The Communist Manifesto. 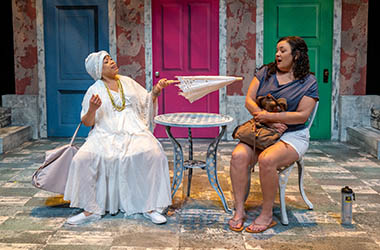 Michi: Thereâs literally nothing else to read and Iâve never read it before.

Carlos: They see you in Miami theyâre gonna lynch you.

Michi: Iâm not gonna take it-

Carlos: Theyâll lynch you in the parking lot of Versailles (a well-known Cuban restaurant in Miami).

Speaking of Carlos, he is an accountant. He escaped the island nation 50 years before the playâs setting of 2017.

Carlos has flown with his millennial offspring, Michi and Danny, to Cuba in search of a family heirloom. The childrenâs mother and Carlosâs wife, an offstage character, did not wish to tag along.

âOver her 'dead bodyâ will she contribute to the Cuban government,â Carlos tells a tourist. However, she essentially said, âHoney, if getting closure will make you easier to live with, then go for it.â 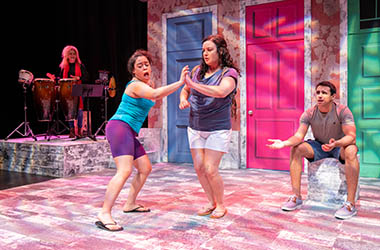 In between scenes, a drummer, Yarelis Gandul, plays her instrument. The drumming lends a sense of urgency and energy to the action. Also, it imbues the proceedings with a cultural flavor.

Scenic designer Michael McKeever has created a spacious, colorful, and minimalistic set. Video clips fill in the details of a locale. For instance, the family mimes driving in a car with little more than a wheel and some chairs. Meanwhile, using projections, we see a street in Cuba filled with traffic. We imagine that the characters are also riding in a car on that street. On the downside, sometimes the videos competed with the on-stage action for attention.

Meltzer, the director, paces the production well and it keeps things interesting. Also, Meltzer directs with attention to the play's important comic timing. Yet he doesn't shy away from emphasizing some of the more dramatic, key moments.

As Carlos, James Puig believably conveys a proud, fiery demeanor. His Carlos is an impassioned man who can also be argumentative, but never unlikable. In fact, he comes across as a loving family man. And when Carlos is suffering, the palpable pain emanates from Puig's voice. Also, his facial expressions clearly suggest suffering. 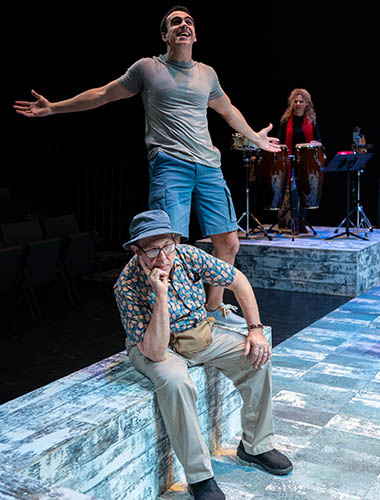 In addition to Puig, cast member Alicia Cruz also excels. She plays Carlosâs daughter, Michi, a musician. The actress disappears into the role of an assertive, high-strung, tireless young woman. She is a mother figure to her brother, Daniel. And Michi grows annoyed when her brother takes things lightly, goofs off, or makes a careless mistake.

Speaking of Daniel, Gabriell Salgado convincingly invests him with a playfulness, as well as immaturity and impulsiveness. These qualities tend to cause the young man to engage in inappropriate behavior.Â  You wonder how Daniel kept a job in a restaurant without his boss firing him on his first day. Salgado's character is so completely different from his star turn last October in Zoetic Stage's "Frankenstein."

Stephanie Vazquez seamlessly slips in and out of multiple parts. She believably, and with deft comic timing, plays people ranging from a nun to a prostitute.

The company's last show, the aforementioned "Frankenstein," was a strong production, albeit more dramatic. With "GringoLandia," Zoetic once again scores another success. Look for "GringoLandia" to experience life beyond this solid world premiere production.

For tickets, go to https://www.arshtcenter.org/en/Tickets/Calendar/2021-2022-Season/Theater-Up-Close/GringoLandia.