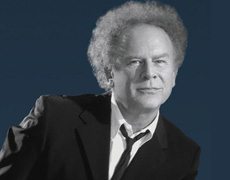 Although it has been over 40 years since Bridge Over Troubled Water was recorded, Art Garfunkel's image and signature vocal remain among the most instantly recognizable in popular music. His "beautiful countertenor," as Neil Strauss described Art's voice in The New York Times, is clear and resonant, surely one of the finest instruments in all of popular music, and a time-honored friend to a world of listeners.

The dialogue began for Art at age four, when his father brought home one of the first wire recorders. Seven years later he was singing Everly Brothers songs at school talent shows with a partner, Paul Simon, from his Forest Hills neighborhood in Queens, New York. In 1957, âTom and Jerryâ (as they were called then) landed a recording contract. Their first 45, Hey, Schoolgirl (which they wrote together) scored a moderate hit and they appeared on American Bandstand as high school seniors

After college, he met up again with Simon and they started performing as Simon & Garfunkel at the height of the folk music boom in late-1963, and within a year were signed to Columbia Records. From 1964 to 1970, they recorded a groundbreaking string of classic albums (Wednesday Morning 3 A.M.; Sounds Of Silence; Parsley, Sage, Rosemary and Thyme; The Graduate; Bookends; and Bridge Over Troubled Water) and an equally impressive body of songs, many of which became pop standards: The Sound Of Silence, Homeward Bound, I Am a Rock, Kathy's Song, April Come She Will, At the Zoo, A Hazy Shade of Winter, America, Scarborough Fair/Canticle, Mrs. Robinson, The Boxer, Bridge Over Troubled Water, Cecilia, El Condor Pasa, and My Little Town.

Simon & Garfunkel won five Grammy awards together, two in 1968 and three in 1970. In 1972, Simon & Garfunkel Greatest Hits was released, remaining on the charts for 131 weeks in the United States and a staggering 179 weeks in the UK. The album has since sold 14 million units - the largest selling album of all time for a duo. In 1990, Paul and Art were inducted into the Rock and Roll Hall of Fame, and in 2003 they accepted the Grammy's Lifetime Achievement Award, before launching another successful worldwide tour.

Having already worked with director Mike Nichols on The Graduate soundtrack, Garfunkel went on to feature acting roles in Nichols' movies Catch-22 (1969) and Carnal Knowledge ('71), opposite Ann-Margret, Candice Bergen and Jack Nicholson. He also garnered acclaim for his roles in films such as Nicholas Roeg's Bad Timing: A Sensual Obsession ('80) with Theresa Russell and Harvey Keitel, Good to Go ('86) and Jennifer Lynch's controversial film, Boxing Helena ('93).

Over the last 20 years, Garfunkel has recorded and released a dozen highly acclaimed solo albums, and continues to perform in concerts worldwide.