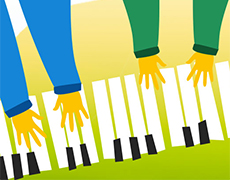 Orchestra Miami presents Symphony Sundays: A series of online performances of the 4-hand piano arrangements of the first eight of Beethovenâs nine symphonies. Sundays at 4 PM beginning on Nov. 1st. Reserve your ticket for the LIVE Zoom performance by visiting website or listen via Orchestra Miamiâs Facebook Page here.

Jared Peroune is a Doctor of Musical Arts student in collaborative piano at the University of Miami. Quickly becoming an established collaborative musician, Jared has collaborated with a number of vocalists and instrumentalists throughout South Florida. He has been heard in concerts and recitals throughout Florida, Italy, Ireland and the United Kingdom, and in his hometown of Georgetown, Guyana. Broadening his abilities to other keyboard instruments, Jared recently was featured as harpsichord soloist in a benefit concert at Corpus Christie Church to raise money for a new instrument. In years past, he has been accompanist and continuo organist for Miami Collegium Musicum, a group for which he was also Assistant Conductor, often in collaboration with the Miami Bach Society and the German Consulate. Caren Levine has established a reputation as one of todayâs most compelling artists. The San Francisco Chronicle described her as âa petite powerhouse, with technique to burn and unimpeachable musicianship. She is one of the finest musicians around, of the highest and most inspiring order.â An alumna of the Metropolitan Operaâs Lindemann Young Artist Development Program, she has been on the roster of the Metropolitan Opera House as Assistant Conductor/Prompter since 2003. In 2012, she received a Grammy Award for Best Opera Recording for The Met Operaâs DVD of John Adams Doctor Atomic Live in HD, and received her second Grammy Award for The Met Operaâs DVD of Thomas AdÃ¨s The Tempest Live in HD in 2014. An active performer, Levine has collaborated with some of the worldâs most prominent artists, including Nadja Salerno-Sonnenberg, Marcello Giordani, Juan Diego FlÃ³res, Lawrence Brownlee, Susanne Mentzer, Morris Robinson, and Barbara Bonney. Particularly interested in the development of emerging artists, she was a founding member of the Miami Music Festival, where she served as Head of Music Staff and Conductor, and serves as head vocal coach at Florida Grand Operaâs Young Artist Program as well as Music Director at Vero Beach Opera.

To hear this incredible duo perform, reserve your ticket on Zoom by visiting website or listen via Orchestra Miamiâs Facebook Page.